An unacknowledged second wave, secret police at funerals, and congratulations from the Taliban. This and more in our weekly Turkmenistan briefing. 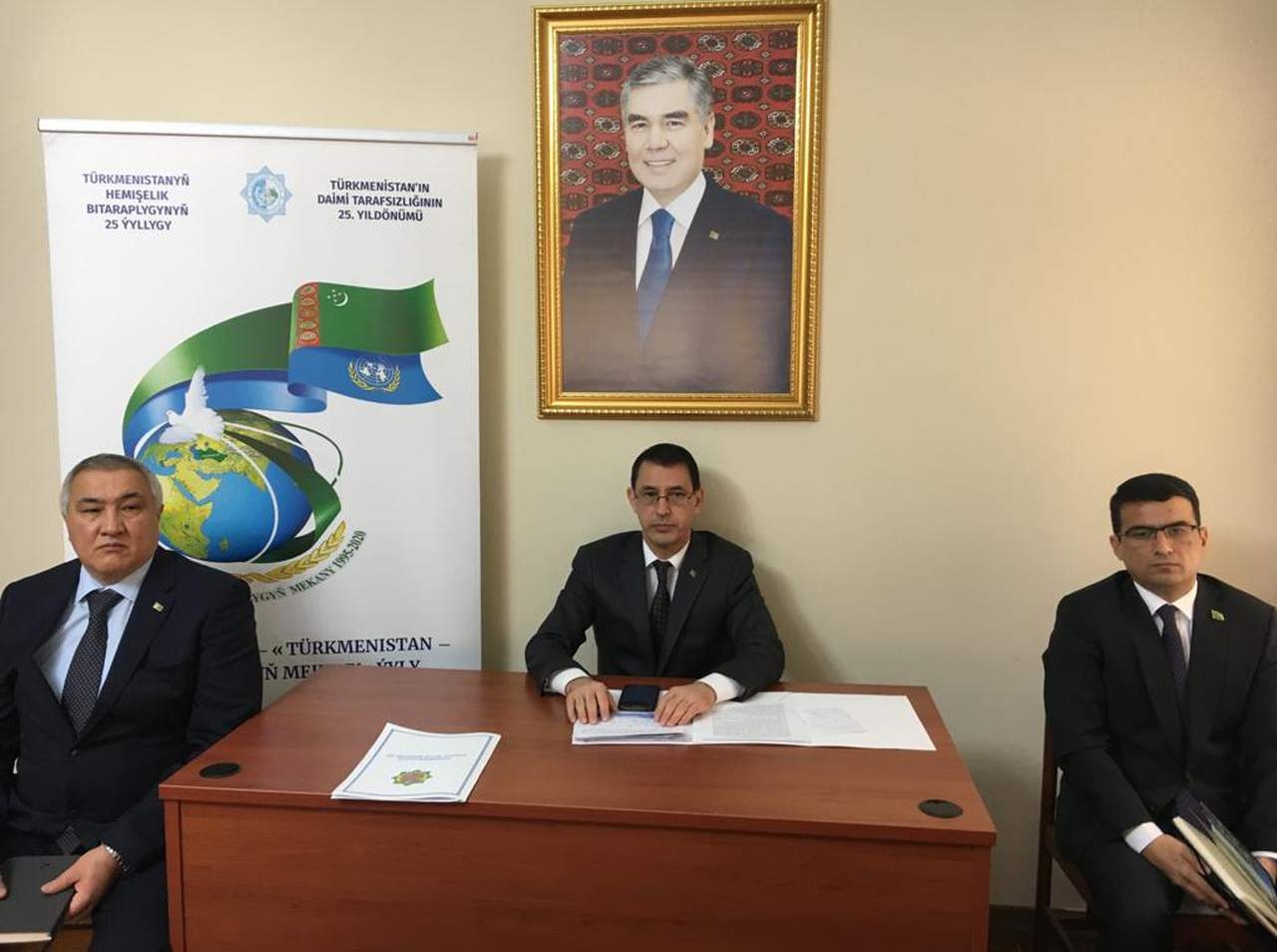 Turkmenistan is talking about hosting an international conference next year on ongoing research into the coronavirus pandemic.

The government will have no useful insights to offer on tackling the infection itself, whose presence in the country it steadfastly denies, but it has honed expertise in other areas, such as repression, obfuscation and ineptitude.

RFE/RL’s Turkmen service, Radio Azatlyk, provided a harrowing update on the situation in a December 7 report. Many clinics are unable, the broadcaster reported, to deal with the large influx of people showing symptoms of COVID-19. The sick are being turned away as a result. Numerous hospitals have been shuttered and placed under quarantine.

When people have succumbed to what are suspected to be COVID-19 infections, their funerals take place under the strict supervision of security services personnel.

“The body of the deceased is handed over in a tightly sealed black plastic bag. They do not allow us to open it and observe all necessary funeral rituals,” one resident of the city of Turkmenabat who recently attended a funeral told Azatlyk

Amsterdam-based Turkmen.news reported on December 11 that parents of children in the Ashgabat and Lebap regions are out of fear refraining from sending their children to school.

“There are about 10 sick children in my niece’s 11th grade class,” a Turkmenabat resident told the website. “A week ago, one girl fell ill right inside the classroom. She began to shake with cold, she couldn’t breathe.”

Even regime-approved outlets are letting the cat out of the bag. Arzuw news website reported on how traditional end-of-year festivities in downtown Ashgabat are being cancelled “due to the epidemiological situation across the world.” Another customary New Year’s Eve party in Ylham park, in front of the circus, has been called off too. An event to mark the passage into 2021 will, however, be held for exactly one hour by the country’s main festive tree, between 11 p.m. and midnight on December 31, and involve a limited circle of up to 50 people, including members of the Cabinet and other important personages. Long-bearded community elders will join that festivity via video link.

State daily newspaper Neutral Turkmenistan on December 11 acknowledged that some health crisis might be afoot by announcing the creation of 24/7 telephone hotline numbers through which anybody suffering from COVID-19-style symptoms – not that the newspaper calls them that – may alert Ashgabat city clinics.

Foreign-based activists and news outlets have long been trying to put a human face on the unfolding crisis by naming as many victims as possible. Turkmen.news on December 8 carried news of the death of Rozumbai Dovletov, a 60-year-old physical education teacher at a school in the village of Akdepe, in the Dashoguz province. Dovletov asked for sick leave after falling ill on December 1. Within four days, he was put on a ventilator at his home. By December 7, he was dead.

The number of cases appears to be rising. Turkmen.news reported that a dedicated coronavirus facility that was established on the former premises of the Polimeks construction company in June, only to be closed at the start of fall, has again reopened.

It would not be Turkmenistan without an arbitrary punitive element too. Vienna-based Chronicles of Turkmenistan has reported on how police officers in the Lebap province have been required to hit a daily quota of catching five people violating the requirement to wear masks. In order to meet that target, the website reported on December 10, officers have taken to prowling the streets in their own cars and in plainclothes, so as not to attract attention. Traders failing to wear gloves and protective clothing in addition to the masks likewise face sanctions.

It isn’t just potential coronavirus-spreaders at risk, though. Turkmen.news this week reported on the imprisonment 26-year-old Ashgabat resident Nurgeldy Khalykov, apparently for the mere act of sharing a photo.

In July, a World Health Organization expert mission embarked on a 10-day visit to Turkmenistan during which they ostensibly sought to evaluate how the country was coping with the coronavirus crisis. In the event, the organization happily agreed to play along with the Turkmen fiction, offering only the meek advice that the government should activate “critical public health measures … as if COVID-19 was circulating.”

Since the WHO is a chronically secretive entity, the public grasped at anything to learn what that expert team was up to. So, when Khalykov saw that one of his Instagram acquaintances had snapped a photo of the WHO staffers sitting by a hotel pool in Ashgabat, he decided to share it with Turkmen.news. Within one day, he had been summoned to a police precinct. He was later charged with purportedly defaulting on a $5,000 debt and sentenced to four years in prison.

This week, the WHO finally addressed repeated requests from Eurasianet to clarify whether Turkmenistan ever did agree to provide them with samples for impartial testing. This is important because Ashgabat’s claims of being coronavirus-free have never been independently verified.

“The WHO technical mission, which took place in July this year has recommended that the country scale up surveillance and testing systems and send samples to WHO reference laboratories for confirmatory testing, as many other European countries have done. Unfortunately, due to many travel restrictions currently in place, this has as yet not been possible,” WHO Europe’s press office told Eurasianet.

Curiously enough, travel restrictions did not stop Berdymukhamedov’s private doctors from traveling to Turkmenistan from Germany last month to pick up vanity awards.

State media by and large ignores its healthcare situation. Instead, it has this week all been about festivities organized to mark the 25th anniversary of the Turkmenistan’s declaration of neutrality status, celebrated on December 12.

The highlight was the solemn-but-also-cheerful laying of wreaths at the Neutrality Monument. Turkmenistan connoisseurs will know that this is the tower topped by the golden statue of the late President Saparmurat Niyazov, who used to rotate to face the sun, but now stands fixedly, gazing upon Ashgabat.

Later in the day, President Gurbanguly Berdymukhamedov delivered an interminable speech on the importance of neutrality to a large hall of his minions and international diplomats. Foreign dignitaries typically refrain from scrupulously note-taking the president’s every word, as his ministers are obliged to do, but there are members of Ashgabat’s diplomatic corps who are eager, for some reason, to stroke Berdymukhamedov’s ego.

These include the likes of Natalya Drozd, a Belarusian career diplomat who has been the head of the feeble OSCE Center in Ashgabat since 2016. State television cameras repeatedly lingered on Drozd as she scribbled away, like a child taking a dictation test. She later delivered her own speech in which she fulsomely praised Berdymukhamedov’s purported contributions to international security.

Drozd is in interesting company. Another international dignitary who congratulated Turkmenistan on Neutrality Day was Mullah Abdul Ghani Baradar, the Qatari-based co-founder of Afghanistan’s Taliban movement.

But Drozd cannot claim the award for diplomatic performance of the week. That plaudit must instead go to Her Majesty’s Man in Ashgabat, British Ambassador Hugh Philpott, for his rendition of a classic Turkmen song, Turkmen Sahrasy. Philpott, who posted the performance to his own YouTube channel, explains that he was invited to record the song by Ashgabat-based news website Orient.tm, which then created a video montage around the ambassador. This sees Philpott exercising his dulcet tones in a desert and on a flower-flecked slope, intercut to cheerful scenes of the capital and symbolism alluding to the neutrality anniversary.

Televised New Year celebrations have on occasion provided entertainment to Turkmenistan-watchers in the form of extended musical performances by President Berdymukhamedov, but it is unlikely even he will be able to match Philpott in 2020.

Edit: This article has been updated to include a statement from the World Health Organization.