Authorities say they wish to resume trade, but continue to prevent trucks carrying essential items from entering the country. This and more in our weekly Turkmenistan column. 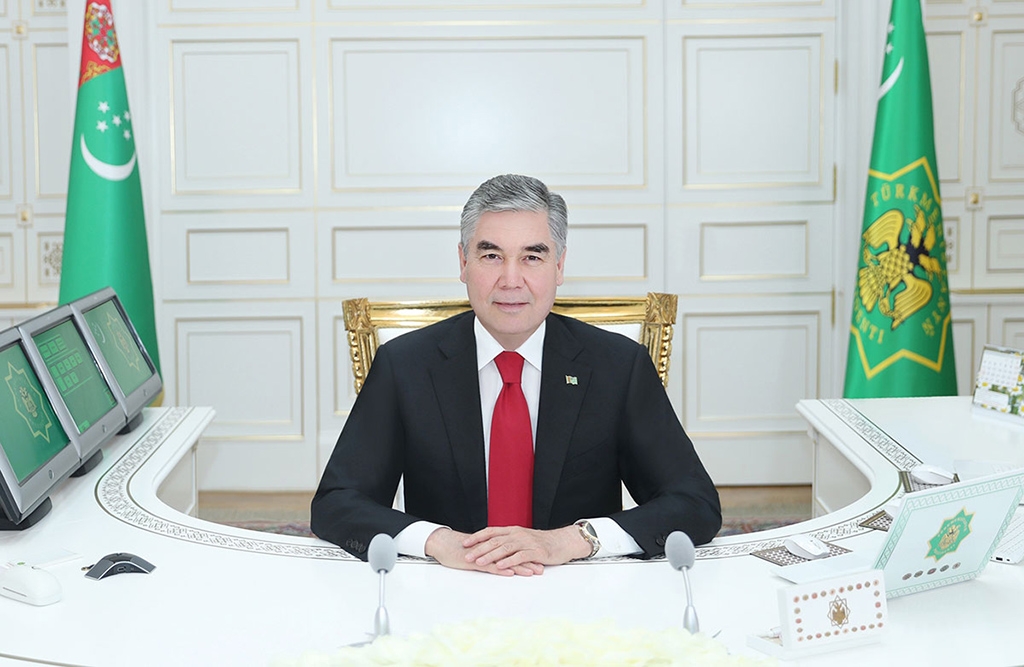 The man without a plan (state media)

The taboo about the economic headwinds buffeting Turkmenistan has been lifted.

President Gurbanguly Berdymukhamedov still seems wanting, however, of anything that could be described as fresh ideas. Salvation from the fallout of the coronavirus pandemic, which has left prices for energy commodities in bad shape, is being pinned on a “steady pace of development in all areas of the economy.”

Adding a little flesh to this meager injunction, the president suggested at a government meeting on May 20 that “special importance should be given to modernization of industries, the reduction of non-targeted expenditure, the stabilization of the financial system and the preservation of investment activity.”

Quite what non-targeted expenditure means will be left to ministries to interpret, but experience suggests that layoffs and furloughs for state workers are in the pipeline.

Vienna-based Chronicles of Turkmenistan reported on May 22 that this had already begun. State energy companies Turkmengaz and Turkmenneft, which operate the natural gas and oil sectors, respectively, have started to let go of employees. So has the Trade and Foreign Economic Relations Ministry. Many of those staff were working part-time on reduced salaries, but will now be released altogether, the website reported.

Lines have reportedly begun to form outside job centers in Ashgabat.

The hope is that the private sector may be able to soak up some damage. The government is following the example of neighboring countries like Uzbekistan and Kazakhstan by “considering the possibility” of offering loans, tax breaks and assistance in export operations to private enterprises. Turkmenistan’s private sector is heavily constituted of elite cronies, so it is tempting to view any such help as self-serving.

Be that as it may, the textile industry is seen as a particular priority for export. Russia is a market of promise, since companies there will evidently lack the squeamishness of the likes of Adidas, Levi Strauss, Nike, Columbia Sportswear and the dozens of others that have joined a pledge to refrain from utilizing Turkmen cotton over concerns about forced labor.

With exports in mind, Ashgabat is busily engaged in trying to clear transportation routes that have been blocked for months as part of pandemic-mitigation efforts. Foreign Minister Rashid Meredov on May 25 held video-conference talks with his Turkish counterpart that dwelled on the need to boost cooperation in transportation, transit and trade. The urgency of that agenda was underlined by the fact that Berdymukhamedov had spoken by phone the day before with Turkish President Recep Tayyip Erdogan.

Yet more three-way, Iranian-Uzbek-Turkmen talks were held on May 21, this time between the nations’ railway officials, on making cross-border traffic safe from infection. Measures being put into place are intended to ensure “uninterrupted transit traffic of rail.” Negotiations earlier this month had focused on the idea of installing “disinfection tunnels” for cargo crossing the border.

Then again, Turkmenistan is back to its old tricks in refusing to give transit to trucks trying to enter from a northwestern frontier crossing. Kazakh business newspaper Kursiv reported on May 25 that dozens of trucks are still stranded on the Turkmen-Kazakh border, at the Temir-Baba crossing near the Caspian shore.

This situation dates back to COVID-19-related restrictions introduced on March 24, whereby goods brought to crossings on the borders with Kazakhstan and Uzbekistan had to be transported onward only by drivers from inside Turkmenistan. Truckers from Belarus were already complaining the following week about the lack of food and water. One driver reportedly died from unknown causes on March 28. One alternative option for freight drivers is to travel via Azerbaijan and ferries across the Caspian Sea, but there are holdups there too. There is no clear sense of why these delays are still occurring, other than that they are the result of overzealous implementation of anti-coronavirus measures, but the fact they are occurring makes a mockery of the Turkmen government’s claim of wishing to ease the passage of goods.

While those trucks, many of them reportedly carrying food, are stranded, worrying testimonies are emerging about the availability of staple goods. The situation is said to be especially acute in the northern Lebap province, which was ravaged late last month by powerful winds. Correspondents for RFE/RL’s Turkmen service, Radio Azatlyk, say that people in Ashgabat have had to secretly send packages of food and clothing to relatives in that area. Azatlyk doesn’t dwell on the motivations for the hostility of officials to privately organized charity, but it seems that the mobilization is serving to embarrassingly show up the government’s chronic inability to provide for its own people. RFE/RL reported on May 22 how the lack of assistance from the government has driven people to sell cars, livestock and jewelry to raise money to pay for food and medicine, not to speak of repairs to damaged homes.

Berdymukhamedov is evidently vaguely aware, in his own way, that the food production and supply chain in its current form is simply not fit for purpose. On May 21, he sat with Esenmyrad Orazgeldiyev, the deputy prime minister with the portfolio for agriculture, and Shamuhammet Durdylyev, a favored bootlicker, the former Ashgabat mayor and now the deputy prime minister for construction and industry, to talk about their respective departments. This trio came to the important conclusion that it would be good if more fruit and vegetables were produced and that creating favorable conditions for famers might also be helpful.

“Our country should be self-sufficient in agricultural goods, markets should abound with a variety of groceries that will meet the needs of Turkmenistan,” Berdymukhamedov said.

Getting into the details, Berdymukhamedov said that he wanted to see more land set aside to achieve an increase in the production of potatoes, onions, “other vegetables” and melons. He frames this explicitly as an import-substitution measure. This fits with a long-standing model of autarky that most economists consider unhelpful when pursued as inflexibly as Turkmenistan does it.

But in the more immediate term, this renewed urgency for self-reliance stems from recognition that the flow of foreign currency is narrowing drastically.

As we reported earlier this month, Berdymukhamedov ordered that domestic companies now be forced to relinquish the entirety of their foreign currency proceeds to the government, as opposed to 50 percent, as was previously the case. Some more details on this plan emerged in the May 22 Cabinet meeting. A state news agency account of the meeting referred, however, only to state-run export-oriented enterprises being required to pay into the fund before getting their money back in manat. What this regime will imply for private enterprises is still hazy.

Since there is more than a sixfold difference between the official and black market manat-dollar exchange rates, the exchequer stands to benefit at the expense of exporters, who will simply have to find savings wherever they can.