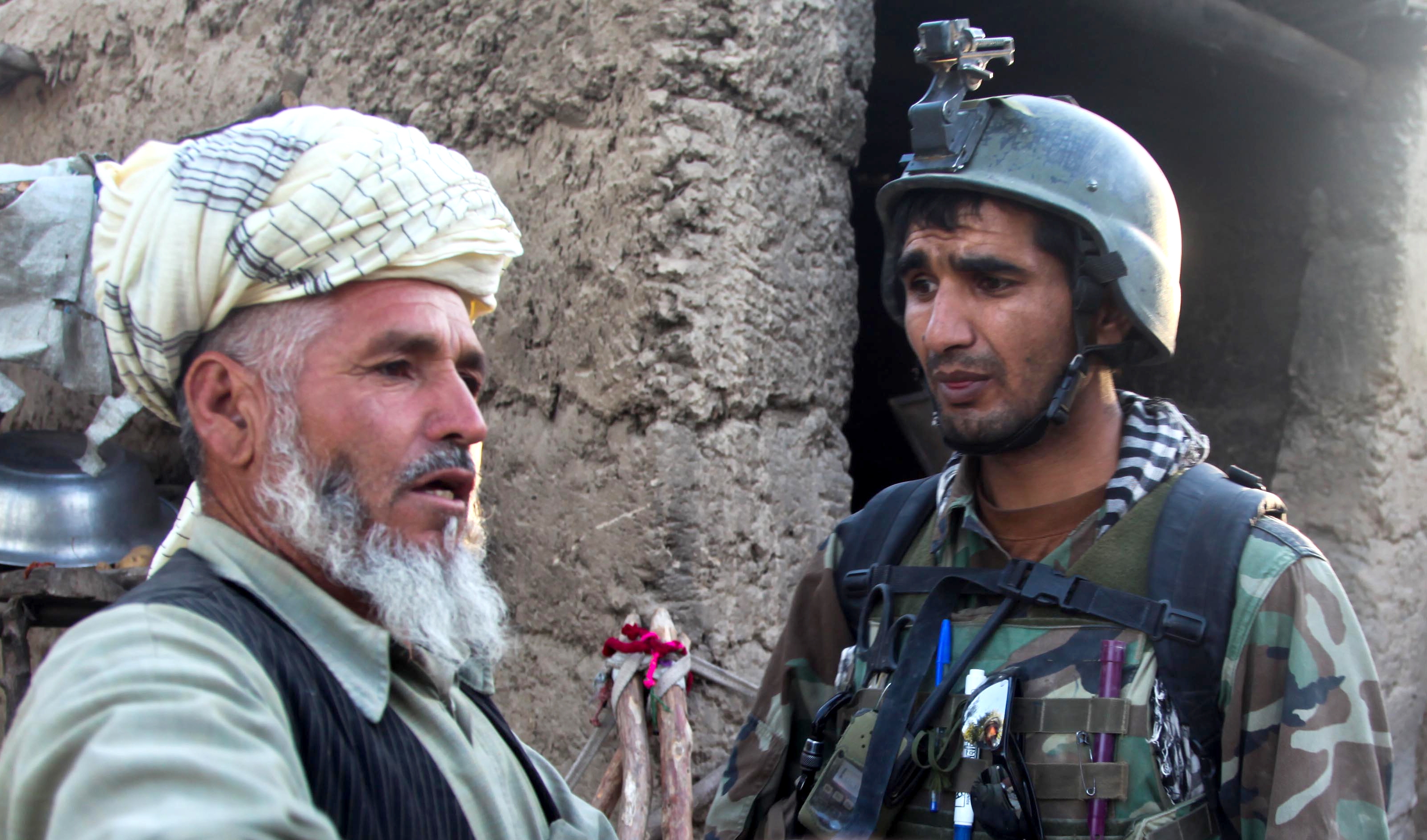 An Afghan National Army soldier meets with a villager in Fayrab province, on the border of Turkmenistan. (photo: U.S. Army Pfc. Devon Popielarczyk)

While the talk around Central Asian security these days usually revolves around the threat of "spillover" of instability from Afghanistan, almost no attention is paid to Turkmenistan. That's despite the fact that Turkmenistan shares a 744-kilometer border with Afghanistan, and there has been a steady increase in fighting over the last few years in the Faryab province of Afghanistan, which borders Turkmenistan.

The lack of attention stems mostly from the fact that no one knows what is going on in Turkmenistan, and the government does not talk at all about external security threats. In a way, that's refreshing, given how so many other parties -- for example the governments of Tajikistan, Uzbekistan, and Russia -- tend to overstate the threat of spillover from Afghanistan into Central Asia, using that threat narrative to their own ends. But is Ashgabat going too far in the other direction? RFE/RL, which has done a series of reports from the Afghanistan-Turkmenistan border, has been making that argument. "In Turkmenistan there does not seem to be the same concern heard in the neighboring Central Asian states. Ashgabat seems content to rely on strategies from the 1990s to avoid future security problems emanating from Afghanistan. But a lot has changed since then and Turkmenistan could now be the most likely Central Asia state to face instability," the site reported in February.

There seems little doubt there has been some conflict on the Afghanistan-Turkmenistan border. In February, three Turkmenistan border guards were killed, and although the Taliban denied responsibility, an ethnic Turkmen tribal leader in Afghanistan told RFE/RL that the killings were retaliation for an episode that had happened a couple of weeks before:

Taliban fighters crossed the Murghab River, further upstream from Marchak, and entered Turkmenistan. Turkmen border guards shot one of them dead, wounded three, and captured two of the militants.

Karim [the tribal leader] said the Taliban gathered fighters together on the Afghan side of the river and threatened to attack. He said the Turkmen border guards then returned the body of slain fighter and surrendered the two captives to the Taliban.

Karim said his village on the border of Turkmenistan, Marchak, was effectively a government outpost surrounded by Taliban on all sides. And the Afghanistan Analysts Network has described Faryab province as "A Taleban Foothold in the North" in 2012 and "a province under constant attack" in 2013.

So is this reason for concern for Turkmenistan? The critical consensus around Central Asia these days seems to be that while the Taliban, even if they came to power after the U.S. and NATO forces pull out, would have little interest in making enemies on their borders and so would not seek to export their revolution to the north. But other radical groups, like the Islamic Movement of Uzbekistan, are more worrisome. One piece on the opposition Chronicles of Turkmenistan last year proposed that the IMU could be recruiting ethnic Turkmens. However, IMU activities on the Turkmenistan border, as everywhere else, are as much the subject of rumor as fact, and there is no evidence that they even have designs on Central Asia at all (their name being a vestige of an earlier period when they were, in fact, focused on Central Asia).

Turkmenistan hasn't entirely been passive in the face of this threat. It has been buying electronic border monitoring equipment from South Africa and Russia, and stepping up its counterintelligence activities.

RFE/RL held a conference call on Thursday with a number of regional experts to discuss this question, and invited The Bug Pit to take part as well. RFE/RL's analyst Bruce Pannier said that the killing of the border guards appears to have spurred the government in Ashgabat into action. He said that Afghan press reported over the weekend that Turkmenistan border guards have been crossing as far as 50 kilometers inside Afghanistan and have been setting up their own checkpoints. And shortly after the border guards were killed, the Turkmenistan armed forces held an exercise on the border with Afghanistan. But at the same time it's been trying to pursue a diplomatic approach to the militant groups, perhaps a vestige of the 1990s when Turkmenistan -- then trying to work out a gas pipeline through Afghanistan with the American company Unocal through Afghanistan -- had a much more conciliatory approach to the Taliban than did other Central Asian states, which actively supported their ethnic comrades in the Northern Alliance. That has led to a "confused" policy, in Pannier's words. "It seems like they're experimenting with a policy and I'm not sure that it's helping them with either side."