A vaunted meeting to discuss shipping Turkmen gas to Turkey and Europe ended without a breakthrough. But Uzbekistan is buying. This and more in our weekly Turkmenistan briefing. 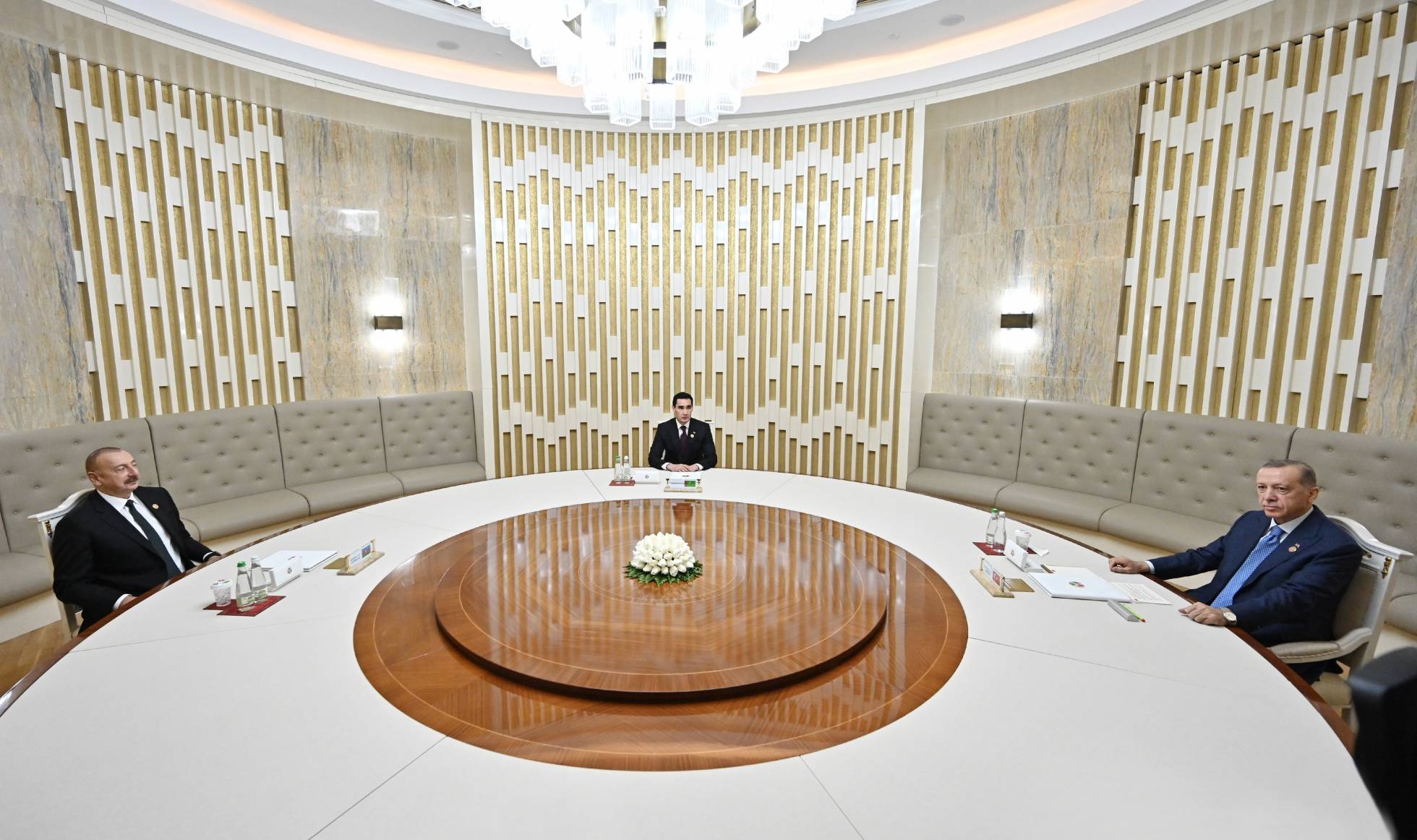 The meeting wasn’t a gas (president.az)

The trilateral Azerbaijan-Turkey-Turkmenistan heads of state summit has come and gone, and the agenda looked much as expected.

The key takeaway from the December 14 talks held in the Caspian resort town of Awaza was that the three countries are looking, to use the phrasing of the Turkmen government website, “to form a coordinated and multi-option system for delivering energy resources to global markets.”

But for all the historicity of the three-way summit, which has been years in the making, nothing was concluded definitively.

On December 17, Turkish President Recep Tayyip Erdogan said, without providing specifics, that the idea of getting Turkmen gas to Turkey was discussed in Awaza, but that the mechanics need to be studied further.

“Our Energy and Natural Resources Ministry will conduct a preliminary study with teams from Azerbaijan and Turkmenistan. After a preliminary study, we will meet again as leaders. I hope we can decide on some kind of roadmap,” he said in remarks made in Turkey’s southeast Mardin province.

It is not yet fully clear what Ankara has in mind. Bloomberg news agency earlier this month quoted Turkish officials as suggesting that Turkmen gas could be carried across the Caspian Sea by ship, which would entail it being compressed into liquid form first. At present, the Turkmenbashi complex of hydrocarbon refineries annually produces more than 300,000 tons of LNG, which is around two-thirds of what the country produces overall. But Ashgabat has said it wants to see that number grow.

Russia would look with unease on any project to build a trans-Caspian pipeline. That point was made afresh by Alexander Bashkin, a senator from Russia’s Astrakhan Region, who wrote in a December 16 column of how Moscow would object to any pipeline project on environmental grounds.

Turkey is positioning itself as a knot-loosening broker on this potentially looming tension. Speaking in Mardin province, Erdogan yet again floated the idea of his country hosting a natural gas hub that would mix Turkmen and Russian fuel. As even sources at Russian gas monopoly Gazprom have admitted to the media, this is pretty much tantamount to a cups and balls magic trick, since it would allow European countries the diplomatic convenience of buying gas from the Turkish hub instead of Russia itself.

Another item on the agenda in Awaza was the shared interest in further developing the Azerbaijan-Turkey-Turkmenistan transport corridor. Turkmenistan is lobbying for the creation of a single logistics center – location to be determined – to optimize the transportation of cargo.

Uzbekistan’s state-owned railway company offered an early glimpse of how this route would benefit Central Asia when it announced on December 18 that it had dispatched a container train bound for the European Union via Turkmenistan, Azerbaijan, and Georgia. The 91 freight carriages loaded with copper concentrate will cover 4,000 kilometers, ending its run in the Bulgarian port town of Burgas.

Framing these kinds of initiatives as being geared toward circumventing or freezing out Russia would be wildly off the mark, though.

Russian Railways said in a statement on December 19 that it has reached an agreement with its peer companies in Iran, Kazakhstan and Turkmenistan on a discounted rate for transporting cargo along the North-South corridor in 2023. Russia has since July been sending cargo by train to India via this route – it expects to dispatch 12 million tons of goods to India in 2023 alone – so the prospect of 20 percent discounts is no small matter.

A Cabinet meeting on December 16 devoted to a summing-up of Turkmenistan’s economic achievements in the first 11 months of the year produced the usual welter of buoyant accounts. Shahym Abdrahmanov, the deputy prime minister with the portfolio for oil and gas, informed his colleagues how the Turkmenbashi refineries had amply overfulfilled production targets for gasoline, fuel, and liquified gas, and how more gas is being extracted and exported.

This was not enough, however, to spare Abdrahmanov and the head of state gas company Turkmengaz, Batyr Amanov, reprimands from President Serdar Berdymukhamedov for “shortcomings.” Abdrahmanov also got one of these dressing-downs in April.

This is all a little odd since, as stated above, official chronicles have the energy sector in rosy health. Amsterdam-based Turkmen.news offers an altogether tawdrier explanation unrelated to performance in the workplace. The outlet reported in November that Berdymukhamedov was compelled to fire a cousin, Akhmet Geldymuradov, from his post as deputy chairman of Turkmengaz after news got out that he had in a drunken rage smashed a bottle over the head of a high-ranking prosecutor. After losing his job, Geldymuradov took off with his family for a break in Dubai before promptly being reappointed to another job in the energy sector. Turkmen.news suggests that Berdymukhamedov’s true motivation for raking Abdrahmanov and Amanov over the coals was that they allowed the whole story to leak out to the public.

This is most unfortunate because there has been some good news on the gas export front.

Media on December 13 cited sources in Uzbekistan’s government as saying it will import 1.5 billion cubic meters of natural gas from Turkmenistan over the winter to meet surging demand. A few days earlier, the Energy Ministry in Tashkent said it has upped its daily imports of electricity from Turkmenistan to 20-21 million kilowatt hours, up from the previously agreed 17-18 million kilowatt hours.

Turkmenistan is this month carrying out its latest population census, for only the third time since independence. The census is running for 10 days through to December 27.

This should in theory finally clear up the matter of how many people actually live in Turkmenistan. Views on this matter vary considerably.

RFE/RL’s Turkmen service, Radio Azatlyk, in 2019 cited a source in the government as saying that almost 1.9 million people had left Turkmenistan over the preceding decade. That report was followed up by Radio Azatlyk in July 2021 with the claim, based on the insights of three insiders, that the population may have shrunk to as little as 2.8 million. Fresh figures from Turkey have confirmed that at least 124,000 Turkmen nationals live full-time in that country – and that does not account for how many reside there without permits.

Even if Turkmen statisticians are inclined to avoid deception when they produce a figure, their data will not be believed. Ashgabat lies so relentlessly through its back teeth – most memorably to claim that it had not recorded a single COVID-19 case – that nothing it says can be taken at face value, so the census may prove a futile exercise.