With boasts of prosperity looking threadbare, more emphasis is being placed on the ineffable and much cheaper consolations of spirituality. 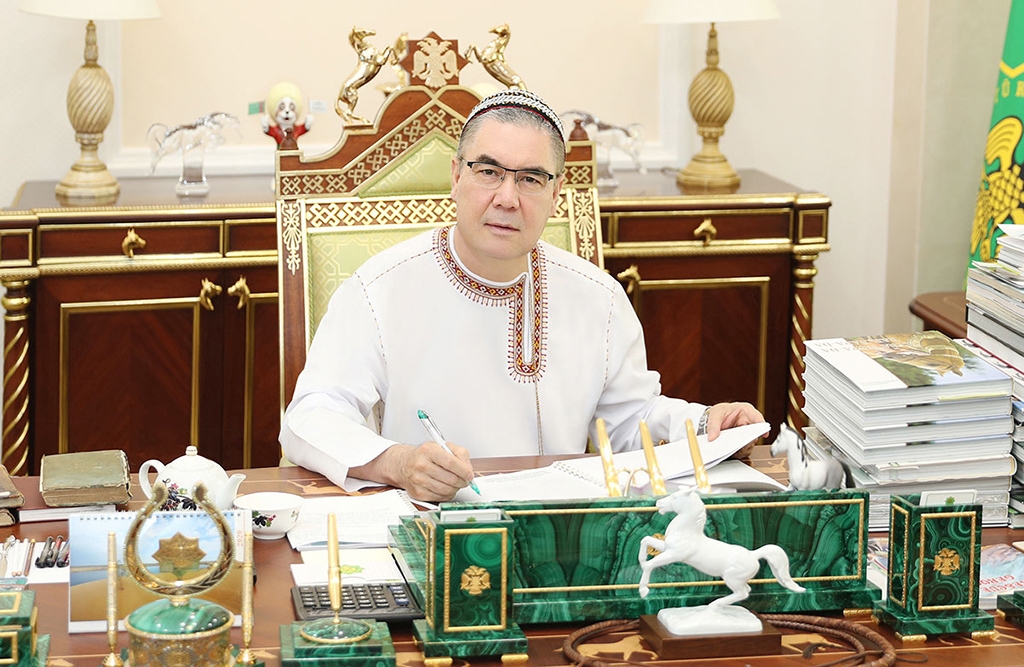 There have long been whispers that Berdymukhamedov would eventually displace his predecessor’s books with his own quasi-religious texts, and that day appears to have come. (photo: state media)

The president returned from his lengthy summer holidays with a spartan new look and brimming with spiritual inspiration.

Gurbanguly Berdymukhamedov appeared on the evening news on August 5 wearing a customary colorful Turkmen skullcap, a traditional embroidered shirt and a steel blue kaftan, sagely looking upon a desk creaking under the many tomes he is purported to have written. The news on this occasion was that he had completed another book.

This is the 53rd and maybe the most consequential – in his own mind, at least – work ever to be put to Berdymukhamedov’s name. The Spiritual World of the Turkmens is a moral-historical treatise on the customs of the Turkmen people through the centuries. The book is divided into 12 chapters devoted variously, as the state news agency explains, to “the beauty of life, prosperity on earth, the eternity of existence, the importance of science and education in the development of society, the principles of a healthy lifestyle, and the significance of industry, hospitality, friendship and kinship, moral foundations and unity.”

With boasts of prosperity looking threadbare in light of the economic stagnation only deepened by the COVID-19 pandemic, more emphasis is being placed on the ineffable and much cheaper consolations of spirituality. Berdymukhamedov cloaked himself in Islamic piety some weeks ago on the occasion of his 63rd birthday – a milestone deemed hallowed because it is the age at which the Prophet Muhammad is believed to have died – but mere Abrahamic tradition has never been regarded with approval by Turkmen state ideologues.

The late President Saparmurat Niyazov instead churned out his own moral-literary lodestars in the shape of the Rukhnama – a three-volume work of gibberish pseudo-history and half-baked spiritual insights. There have long been whispers that Berdymukhamedov would eventually displace those books with his own quasi-religious texts, and that day appears to have come.

There was another slice of messaging in the president’s new look. His aggressively cropped locks may have been a nod to asceticism, but it also acknowledges the customary Turkmen belief in the health-preserving qualities of maintaining a shaven head.

And this is as Turkmenistan persists with its World Health Organization-endorsed quantum theory-style notion that it has no coronavirus cases, whilst also having coronavirus cases. The WHO is evidently so concerned at the situation that its director-general, Tedros Adhanom Ghebreyesu, was even prompted to initiate a video conferencing conversation with Berdymukhamedov on August 7.

State television chose to depict this exchange as a lengthy wise lecture delivered by Berdymukhamedov to Ghebreyesu, who was shown dutifully taking copious notes, the same way that Turkmen ministers do when trying to avoid accidentally locking eyes with their president.

A state news agency readout of the meeting alluded to a slight evolution in the government’s thinking on the health crisis clearly gripping the country, referring at one stage to a “pneumonia of unknown etiology that is rapidly spreading in our region,” before adding that “there are those that believe this disease is due to the novel coronavirus.”

A promising development to have come out of this conversation was that Turkmenistan has finally consented to submit its coronavirus test samples to WHO verification at reference laboratories based outside the country. This should in theory put an end to Ashgabat’s ludicrous claim to being coronavirus-free, although the process of collecting the samples in the first place is so rigidly under state control that it cannot be excluded that the authorities will contrive ways to perpetuate their fiction.

The government keeps, after all, issuing its periodic warnings on “high dust levels,” which is why it is for official purposes issuing increasingly strident calls for the public to adopt safety precautions.

In contrast with earlier policy, whereby people were informally discouraged from wearing masks over concern at an outbreak of mass panic, Turkmens are now being threatened with fines for heading outdoors without the masks. Vienna-based Chronicles of Turkmenistan reported on August 6 that shops, cafes and restaurants were ordered shut for a 10-day period in mid-July for disinfection, but that they still remained closed as of the weekend. The same goes for the capital’s open-air Tolkuchka market, although produce bazaars are operating, albeit between disinfection sessions.

Precautions have extended into the prisons, according to Chronicles. At one women’s prison in the Dashoguz province, movement within the facility is being restricted and prisoners with infectious conditions have been confined to an isolated zone. Workshops have been temporarily closed and family visits limited to just one hour.

The motivation for this caution appears to be that cases of pneumonia are being recorded in prisons. Two prisoners are said to have died at a penitentiary in the Lebap province on July 18. Relatives were unable to retrieve the bodies, which were instead buried by Interior Ministry troops in a cemetery in the village of Seydi.

Another measure billed as an advance in the government’s e-government agenda, but more likely intended to avoid large numbers of people being in close contact, was an announcement by the State Migration Service that applications for new biometric passports can now be processed online.

News bulletins have for weeks featured segments about factories producing medical masks. TDH news agency on August 6 reported how an Ashgabat-based factory is now producing up to 100 disposable masks every minute. Another factory, in the Mary province, is turning out 10,000 masks a day, TDH reported. This work is being carried out in conformity with insights discovered by the Turkmenistan Academy of Sciences, which revealed last month that wearing reusable masks can protect against dust and viruses.

Even at these allegedly Stakhanovite rhythms, local manufacturers may not be keeping up with demand for protective clothing. Chronicles reported on August 4 that 120 health workers in the city of Turkmenabat signed a letter to their regional government asking for better equipment and the provision of temporary accommodation for doctors and nurses dispatched there to cope with the worsening health crisis. All that earned them was a stern rebuke and the threat of prosecution in the event of more complaints.

Elsewhere, the process of economic entropy rumbles on. Chronicles has reported on how management at Ashgabat’s falcon-shaped international airport has sent most of its employees on unpaid leave, likely until the middle of September at the earliest. This is hardly surprising given how few flights the airport is servicing at the moment.

RFE/RL’s Turkmen service, Radio Azatlyk, on August 4 cited a correspondent in the Lebap province as saying that most state employees there – around 80 percent – have been told to take three months leave without pay. This affects all kinds of people, including teachers, local government staff, factory workers and employees of telecommunications services.

Cash shortages may also be getting worse. Amsterdam-based Turkmen.news reported on August 8 that people wishing to withdraw money from certain ATMs must present their passport to bank employees and police officers before being allowed to do so. If the name on the card does not match that on the ID, access is denied. It is often the case that people give their bankcards to friends and relatives to withdraw money on their behalf, since using ATMs involves hours if not days of waiting.

The government’s spin on all this – not that it acknowledges the shortage of paper money – is that it is moving toward the digitization of finance. Banks are accordingly informing their customers that they should avail themselves of the option of using in-store payment terminals and they should report any retailers declining to process such transactions. And Rysgal Bank, Turkmenistan’s only private lender, eagerly boasts of its online payment services any chance it gets.

Even if money is in short supply, the same cannot be said of oil and oil byproducts, which are being exported in growing volumes. News website Business Turkmenistan cited official Russian sources as noting that the amount of Turkmen crude transiting Russia had, in the period from January to July, totaled 1.3 million tons, a 24 percent increase on the year before.

At the same time, deliveries of aviation fuel to Georgia in the first half of 2020 have doubled in volume year-on-year, to 22,900 tons. Nebit-Gaz, a news website run by state gas company Turkmengaz, cited the Georgian Union of Oil Product Importers as saying that Turkmenistan exported 50,000 tons of diesel and petrol to Georgia over that same period – an 8,000 ton increase on 2019. The website attributed this promising surge to an agreement signed in February with the railway companies of Georgia and Azerbaijan to reduce transportation tariffs for Turkmen oil products through November.