Turkmenistan: Son of a gunslinger

While the president was busy playing soldier, all his regional peers, as well heads of state from China, Russia and Iran, were mustering in the capital of Tajikistan. 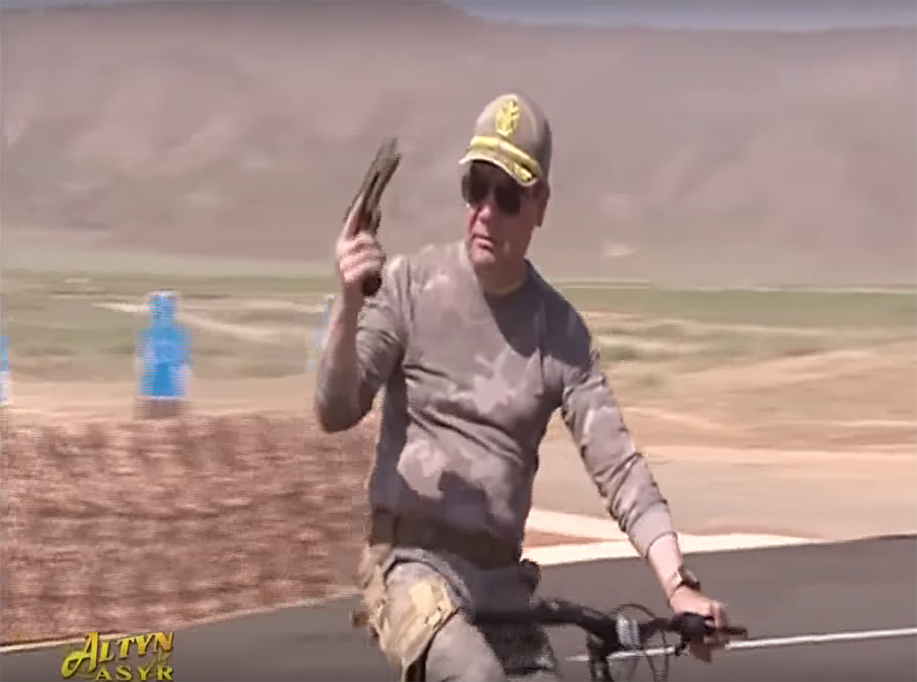 The ascent of Turkmenistan’s dauphin proceeded by a notch this week with his appointment as governor of Ahal province. He was previously deputy governor.

Serdar Berdymukhamedov, the 37-year-old son of the president, is being rotated through important government posts with a likely view to one day putting him in charge of the whole country. Ahal is the province that surrounds the capital, Ashgabat, and is the source of much of the current ruling elite.

The new governor’s foremost priority will be overseeing the construction of a whole new city, whose creation was announced in April.

Prior to entering service in local government, Serdar Berdymukhamedov served as Deputy Foreign Minister, in which capacity he met with foreign heads of state and attended high-profile summits. Since 2016, he has had a seat in parliament.

It is not inconceivable that Turkmenistan could entertain a Kazakhstan-style transition before the death of Berdymukhamedov, who is still a relatively youthful 61 years of age. The president, after all, appears supremely bored with the business of governing and prefers to engage in photo-op capers.

The highlight of this week was a would-be snap inspection of the troops out in the desert. Although the drill was said to have begun unexpectedly at midnight, the preparedness of state television cameras to film the whole thing indicates it was all minutely choreographed.

A June 16 television news bulletin on the drill was intended to impress, but a close study of the footage made for underwhelming viewing. A handful of fighter jets strafed a dusty hillock, special forces stormed a stationary car and crack troops in armored personnel carriers easily raided a pretend militant camp.

As ever, Berdymukhamedov stole the show. He fired at cutout targets from a stationary off-road vehicle and then followed this up by shooting with a pistol at more targets while wobbling on a mountain bike. This latter feat drew the attention of the international press, which tittered with glee at the suspicious editing of state television footage, which made it seem like the “madcap president” was firing his weapon with William Tell levels of accuracy.

While the president was busy playing soldier, all his regional peers, as well heads of state from China, Russia and Iran, were mustering in the capital of Tajikistan for the Conference on Interaction and Confidence-Building Measures in Asia. Turkmenistan sent nobody.

This isolationist stance shifted exiguously in April, when Russia resumed buying Turkmen gas following a 40-month hiatus. Ferghana News, a Moscow-based site focused on Central Asia, has picked up on a curious development, however. Data from Russia’s Central Bank shows that no remittances were sent from Russia to Turkmenistan in the first quarter of 2019. The volumes have historically been small, but for the figure to dwindle to nothing is hard to explain.

There was more worrying news from Russia on June 11, when three people were reportedly killed and two injured after an explosion on a Turkmen oil tanker near the Caspian Sea port of Makhachkala. Orient News, a Turkmen government-allied outlet, had only days earlier been touting the success of a recently created route to export Turkmen oil via Russia. This past February, Ashgabat formed a new state shipping company focused on shipping petroleum.

Ashgabat is pushing ahead with its Turkmenistan-Afghanistan-Pakistani-India, or TAPI, pipeline project. Afghanistan’s TOLO News reported on June 16 that a Turkmen delegation to Herat told Afghanistan’s acting finance minister, Humayun Qayumi, that "practical work" from Turkmenistan into the province would begin this year.

TAPI faces major continued challenges, from a lack of pledged funding to the security situation in Afghanistan. Taliban forces attacked Afghan border guards in a district of Herat abutting Turkmenistan just last week, killing seven and wounding 10. Just to induce more nerves, the New York Times noted in a piece this week about the presence of the Islamic State group in Afghanistan that “Islamic State cells have appeared in … the western province of Herat.”

Qayumi told TOLO that Afghanistan expects to import military uniforms from Ashgabat in a barter trade for marble. Marble is Berdymukhamedov’s favored construction material. And as the president remarked in a June 14 cabinet meeting, "this year an extensive program of construction and commissioning of facilities is planned."

Somebody is making a killing from all this building. As RFE/RL's Turkmen service, Azatlyk has reported, the construction boom is helping drive up prices for cement.

The details are scant so far, but it does seem that the government is going through the motions of freeing up more land for development by private interests. Deputy Prime Minister Charymurad Purchekov this week updated the Cabinet on the allocation of plots for the construction of private farms and residences. Under a presidential order, more than 650 square kilometers of land across the country have been set aside into a “special land fund” for this purpose.

A report from Employment Conditions Abroad, a consultancy, has found that Ashgabat is the most expensive city to live in for expatriates this year, rising a staggering 110 places since the last survey. As ECA Asia director Lee Quane noted: “Those familiar with the economic and currency issues experienced by Turkmenistan over the past few years may have seen this coming.”

“Ever escalating levels of inflation, coupled with a prominent illegal black market for foreign currencies pushing up the cost of imports, mean that at the official exchange rate, costs for visitors to the capital city Ashgabat have increased enormously,” Quane said.

Berdymukhamedov is adopting some token measures to address the chronic paucity of foreign investors, who are kept away by corruption, bewildering visa regulations and just a general air of nebulousness about how the country operates. On June 14, Berdymukhamedov signed a decree to create something called an “interdepartmental commission on foreign investments.” A government statement on this decree does not explain what this body is or how it will achieve its goals.