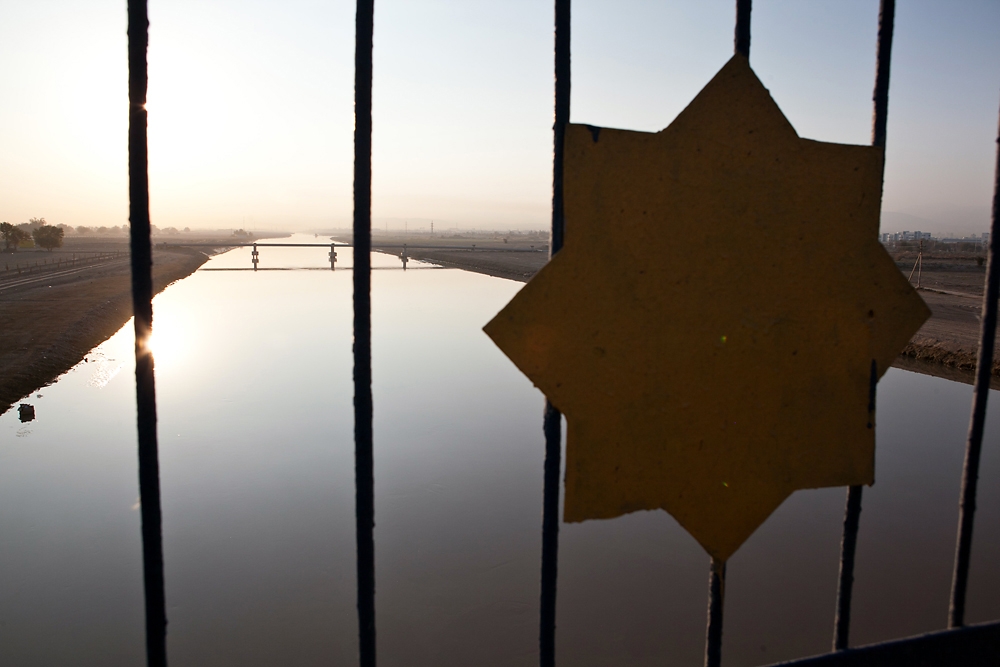 Can the Karakum Canal really feed a 3,500-square-kilometer lake in the middle of a desert? (Photo: EurasiaNet)

Turkmenistan is the Central Asian nation most associated with vast deserts. It’s also a place that is dealing with the consequences of the Aral Sea disaster. But these facts aren’t deterring Turkmen leader Gurbanguly Berdymukhamedov from moving ahead with a scheme to create a giant artificial lake in the middle of nowhere.

The idea for the would-be Altyn Asyr (“Golden Era”) Lake – also known as Lake Turkmen – dates back to 2000, a brainchild of then-president Saparmurat Niyazov. In 2009, Berdymukhamedov inaugurated the first phase of the multi-billion-dollar project, opening a sluice and promising to turn the Karakum Desert into a “blossoming oasis.” Berdymukhamedov again toured the site last month, “assessing Lake Turkmen’s positive impact on the desert” and vowing to complete the project, the state-run TDH news agency reported.

Officials in Ashgabat claim the lake, which will take at least $4.5 billion to complete, will save water that would otherwise be wasted, encourage the development of a fishing industry, and expand agricultural land in a country that is currently roughly 80 percent desert. Officials claim it will also address rising salt levels in the Amu Darya River, which provides about 90 percent of Turkmenistan’s water according to the United Nations. When completed, the lake is projected to cover approximately 3,500 square kilometers and contain 132 billion cubic meters of water; the canals feeding it will stretch for over 2,600 kilometers.

Turkmen scientists argue that agricultural wastewater is increasing salt content in the Amu Darya River, which then pollutes farmland. Part of the lake project envisions diverting water from Lake Sarykamysh on the Turkmenistan-Uzbekistan border to the new body of water, a move that Tashkent is unlikely to stomach quietly.

While reporting on Berdymukhamedov’s August 22 visit to the site, state television suggested the UN had backed the project.

But the project’s many skeptics argue that it is an ecological catastrophe waiting to happen, that too much water will evaporate en route to the lake in the middle of the desert. Experts also doubt the feasibility of maintaining low salt levels in the new lake without feeding it fresh water. Several note the similarity with a notorious, nearby environmental disaster otherwise known as the fast-shrinking Aral Sea. Since the 1960s, when the Soviet Union began siphoning off river water to fuel the growth of the regional cotton industry, reduced water flows have led to the almost complete disappearance of the sea, which lies to Turkmenistan’s north.

“When I first heard about [the creation of] this lake, to tell the truth, it made me laugh because from the very start it was such, to put it mildly, a maniacal project,” Elena Vedeneyeva, a hydrologist at the Tashkent-based Scientific Research Hydrometeorological Institute, told EurasiaNet.org. “They have [no water] to collect and I don’t know what they are counting on.”

Vedeneyeva added that if Turkmenistan were to take water from the Karakum Canal to feed the lake, it would leave Ashgabat without water. “Ashgabat survives thanks to the Karakum Canal. Moreover, there [already] exist very serious disputes between our country [Uzbekistan] and the Turkmens about the withdrawal of water [from the Amu Darya] for the Karakum Canal. They are coordinating this absolutely with no-one,” Vedeneyeva said. “This could lead to a very serious international scandal.”

EurasiaNet.org’s repeated attempts to reach representatives of an intergovernmental, donor-funded agency, known as the International Fund for Saving the Aral Sea, went unanswered. The agency recently relocated from Almaty to Tashkent and is tasked with coordinating water policy among the five countries of Central Asia. One number listed on the Aral Sea fund’s website turned out to belong to a kindergarten.

Russell Zanca, a Central Asia specialist at Northeastern Illinois University who recently completed anthropology fieldwork in Turkmenistan, described the lake project as an example of “gigantism,” which is “a way that a state government shows power.” Berdymukhamedov is under pressure to appear “all-wise, all-knowing” because his predecessor, Niyazov, established a legacy of being an “incredible state builder,” Zanca told EurasiaNet.org.

Berdymukhamedov has indeed continued Niyazov’s policy of erecting giant new government buildings and breaking records. He unveiled the world’s largest enclosed Ferris wheel last year and has spent billions on a little-visited Caspian Sea resort complex. The president, who likes to be called Arkadag (“The Protector”), appears constantly on state television winning sports competitions and cultivating the image of a man of action.

Zanca drew parallels between Berdymukhamedov’s image machine and that of Soviet dictator Joseph Stalin, saying that a system centered on a strong leader still appeals to bureaucrats in isolated Turkmenistan. “It is a kind of model from Stalin in some ways and this is what a lot of those bureaucrats from previous generations were raised to understand. And I think there is a relationship between what the Turkmens are doing now and their Soviet legacy,” he said.