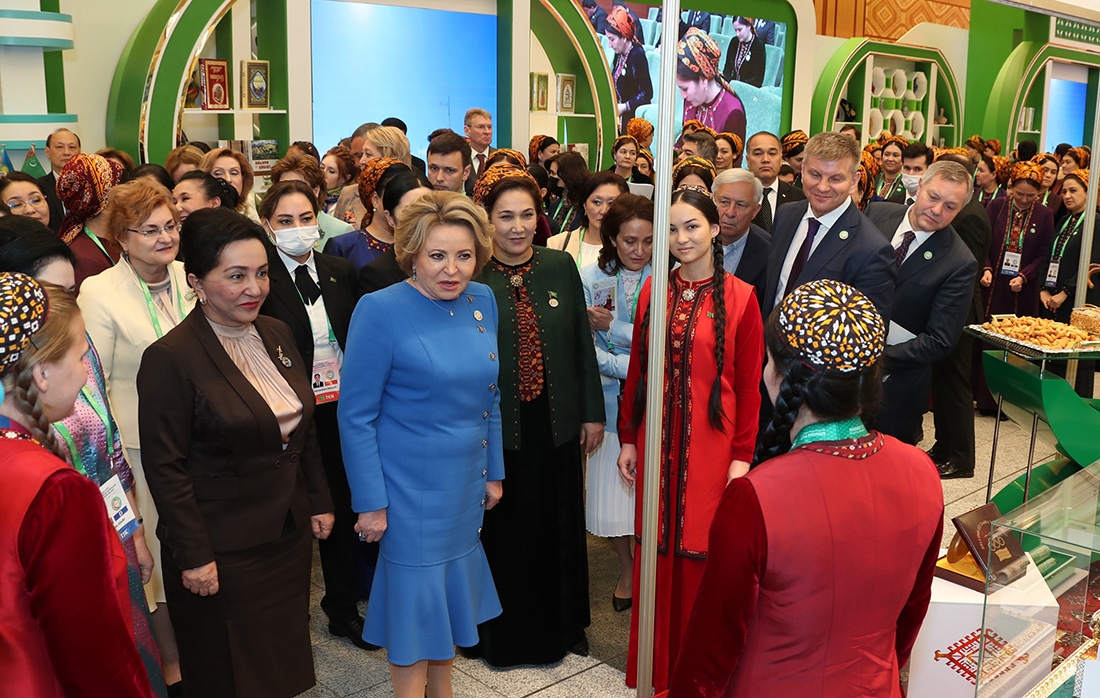 Valentina Matviyenko, the speaker of Russia’s upper house of parliament, visited Ashgabat to do some diplomatic outreach for her deeply isolated government. (Turkmen government handout)

In an acutely ironic bit of timing, Turkmenistan last week hosted a conference on the role of women in public life.

President Serdar Berdymukhamedov declared in inaugural remarks on May 12 that “gender equality is important in ensuring stability and harmony in society.”

“The issue of ensuring equal rights and opportunities for women are a policy priority for all countries of the world, including those of Central Asia and Russia,” he said.

The emptiness of those words was highlighted in a statement issued on the same day by the London-based International Planned Parenthood Federation, which lamented how the freedoms of women in Turkmenistan appear to have declined since Berdymukhamedov took over power from his father in March.

“Since April 2022, the government has taken policing over women’s bodies to a whole new level: imposing a virtual ban on abortion care, enforcing a ban on a range of beauty services, forbidding women from sitting in the front seat of private cars and prohibiting male taxi drivers from offering rides to women,” the IPPF said.

As Open Democracy reported earlier in the month, a 2015 law lowering access to abortion from 12 weeks of pregnancy to five weeks was made public only in April. The implication being that while this rule was previously a dormant formality, Berdymukhamedov’s arrival in office has brought it onto the agenda.

The president may feel like his conservatism is mere compliance with public sentiment. A United Nations-led survey from 2019 found, for example, that 58.4 percent of queried women between the ages of 15 and 49 said they believed husbands were justified in hitting their wives for reasons including refusing sex, burning dinner or going out without telling their husband.

Such surveys need to be handled with caution or skepticism, however. Other findings test the absolute limits of credulity and would in more propitious circumstances warrant follow-up investigation. When queried in the same survey about whether they had access to improved sources of drinking water, 99.9 percent of respondents replied in the affirmative. To answer otherwise would be to question the government’s care for its people.

Which is to say that claims of masses of Turkmen women meekly agreeing to be punished by their spouses for the mere act of “talking back” is almost certainly overstated by social desirability bias. This is a well-documented phenomenon in parts of the developing world, and Turkmenistan is unlikely to be an outlier.

Another dismal reality is that rights are denied to one and all, immaterial of their gender.

Last week, advocacy group Freedom Now relayed the news that the United Nations Working Group on Arbitrary Detention had violated the basic human rights of lawyer Pigambergeldy Allaberdiyev, who was detained in September 2020 in the western town of Balkanabat, ostensibly over his involvement in a scuffle likely instigated by a government-enlisted provocateur, but actually on suspicion of ties to a foreign-based protest movement. Within days, Allaberdiyev was sentenced to six years in prison, following a two-hour trial that was closed to the public. The lawyer has been held incommunicado since that time.

The guest of honor at the women’s conference was Valentina Matviyenko, the speaker of Russia’s upper house of parliament, the Federation Council. In addition to her conference duties, Matviyenko was in Ashgabat to do some diplomatic outreach for her deeply isolated government. At a May 12 meeting with Berdymukhamedov she stated that Russia would welcome the prospect of Turkmenistan joining the Moscow-led Eurasian Economic Union.

“If you considered it possible to adopt observer status, it would be a good opportunity to explore the possibilities of this union […] and to decide on a course of action,” Matviyenko told the president, sounding for all the world like a door-to-door magazine salesperson.

Russia is very much trying to make Turkmenistan feel appreciated. Matviyenko arrived with an invitation from President Vladimir Putin for Berdymukhamedov to pay an official visit to Moscow. This offer has been accepted and the dates are being agreed, she said.

Ashgabat may have more relevant fish to fry at the moment, however.

Berdymukhamedov on May 10 welcomed the visiting Economy Minister of Azerbaijan, Mikayil Jabbarov, who is a particularly important figure in his country’s energy industry. The Turkmen readout of this meeting was typically lacking in detail, although it mentioned that the men agreed to “build on their traditional cooperation” between their respective oil and gas industries. This could mean something or nothing at all, but in light of European eagerness to get their hands on non-Russian natural gas, any such dialogue will be closely watched.

Jabbarov’s visit may also have served as preparation for a long-awaited Azerbaijan-Turkey-Turkmenistan heads of state summit that is expected to take place in Turkmenistan later this year.

There were more signals this week about Turkmenistan’s dreams of exporting its gas eastward. Jamal Nasir Gharwal, who was installed as Afghanistan’s chargé d'affaires in Moscow in April, despite Russia still deeming his bosses in the Taliban regime a terrorist organization, told RIA-Novosti in an interview published on May 13 that the security threats previously hindering progress on the trans-Afghan TAPI gas pipeline are no longer present.

“There are a lot of people who want [this project]. The most important thing is that we are very pleased with the security situation: there are no threats as there were before," he said.

This is bullish talk just as the Taliban regime has had to concede that the Islamic State group is active in border areas and threatening neighboring countries.

One of the countries purportedly being targeted by Islamic State militants operating out of Afghanistan is Tajikistan, so it felt fitting that Tajik and Turkmen security services have pledged to step up efforts to fight against terrorism, extremism and transnational organized crime. It is not clear what such cooperation would entail in practice, but the governments have stated in no uncertain terms that it is Afghanistan that is worrying them.

The holiday season opened officially at the Awaza tourist resort on May 15, but going there is not a simple matter of booking a spot in a hotel. As the Neutral Turkmenistan newspaper reported on May 17, visitors will first need to register with the State Migration Service. People no longer need to “leave the house to fill out all the necessary documents,” the newspaper boasted. To get the required pass, applicants must provide a copy of their passport, a hotel reservation and a certificate attesting to having received three doses of the COVID-19 vaccination.