Turkmenistan Supplying over Half of Chinese Gas Imports 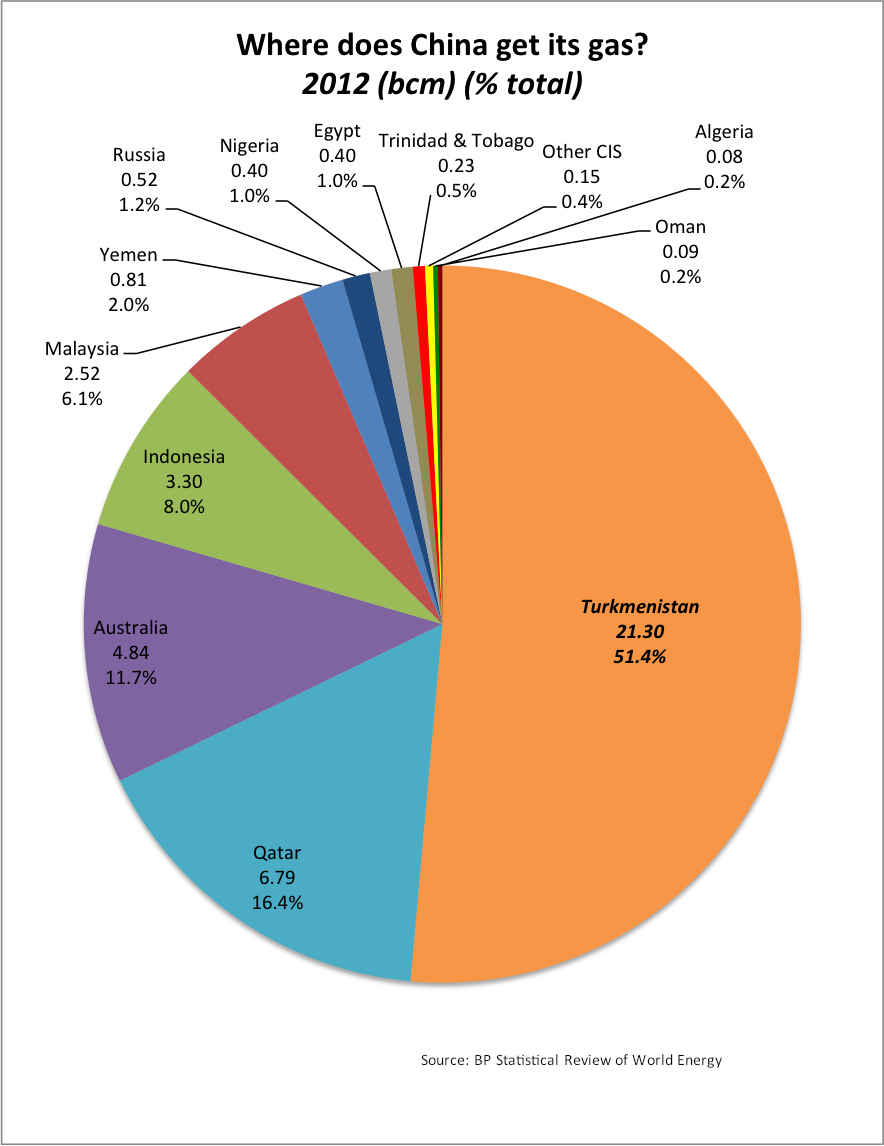 Where does China get its gas?

When China opened a gas pipeline from Turkmenistan in 2009, Ashgabat got what it had long wanted: independence from Russia with an alternative market for its abundant natural gas reserves. What wasn’t obvious was just how hooked energy-hungry China would become on Turkmenistan. Turkmenistan is now, by a great margin, China’s largest foreign supplier of natural gas: over 21.3 billion cubic meters (bcm) in 2012, or 51.4 percent of imports, according to data published by the BP Statistical Review of World Energy. That’s about three times more than Qatar supplies China (see chart). And the number is set to skyrocket with the opening of the giant Galkynysh field this autumn, which will also feed the 1,833-kilometer Turkmenistan-Uzbekistan-Kazakhstan-China pipeline. China still produces the majority of its own gas domestically. Of the 146.6 bcm it consumed last year, it produced 107.2 bcm, up from 80.3 bcm in 2008 (an increase of 33.5 percent), according to the BP Statistical Review. But its imports are growing fast: In 2008, China imported 4.2 bcm; last year, it imported 39.4 bcm (an increase of 838 percent). Uzbekistan and Kazakhstan are eager to start supplying China, too. But though Uzbekistan has regularly made promises, it’s unclear what it is contributing to the pipeline. Despite shortages at home, Uzbekistan was expected to send at least 4 bcm last year and 10 bcm this year through the same China-bound pipeline. The BP Statistical Review didn’t include Uzbekistan’s contributions (though the country might fall into the “other CIS” category, which is negligible). Kazakhstan has yet to link its western fields with the pipeline.China is unlikely to remain so dependent on one source for long. This month China will start receiving gas from Myanmar’s offshore Shwe field along a 12-bcm-per-year pipeline, the Platts oil and gas news agency reported August 5. Myanmar “presents a strategic option that provides diversification from China’s existing sources,” Platts said.