The president’s invisible man routine, which has been going since the start of July, may not be death-related, but it is most definitely not normal. 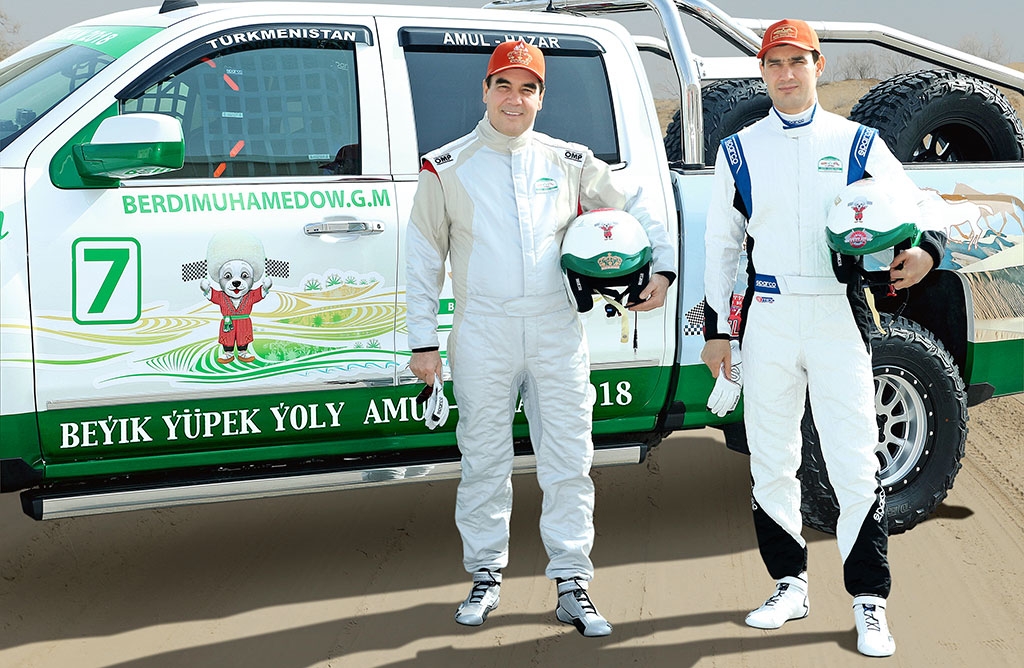 If something adverse were to happen unexpectedly to Turkmenistan’s president, there is every chance that power might pass to his son and heir apparent, Serdar Berdymukhamedov.

That being so, a report published this week by Vienna-based website Chronicles of Turkmenistan made for discomfiting reading. Berdymukhamedov Jr has since taking on the job of governor of the Ahal province in January run his affairs like a despot-in-waiting.

He gets to work in the administrative center, Anau, in a heavily guarded motorcade and makes it a requirement that nobody enters or leaves the building for the duration of his presence there.

“His favorite expression when talking to subordinates is: ‘I will wring your neck,’” one source told Chronicles.

As for meeting with the general public, Berdymukhamedov Jr has shown no interest, leading people to conclude that he will be shuffled off to another senior government position in the next six months or so.

Talk about President Gurbanguly Berdymukhamedov’s extended disappearance and purported death and/or severe ill-health has tailed off considerably since the surge of chatter earlier this month. And yet, the president is still maintaining a remarkably low profile.

State television managed to quash the speculation by airing a news bulletin on July 24 showing a very wooden Berdymukhamedov studying and using a golden-tipped cane to point at some designs for bus stops. Since then, he has disappeared again, although state news agency bulletins have him resurfacing notionally to congratulate British Prime Minister Boris Johnson on his new job and extend his condolences to the leadership of Tunisia over the death of President Beji Caid Essebsi. This invisible man routine, which has been going since the start of July, may not be death-related, but it is most definitely not normal.

Be that as it may, local celebrities have been enlisted to go on the counterattack. A group of pop singers, actors and comedians produced a string of Instagram video messages to condemn disseminators of death rumors, calling them traitors to the motherland.

“How, living in this fairytale land, which is as beautiful as a gupba [an ornamental silver headdress worn by Turkmen women], can these bastards write such vomit-inducing words when the ink flows from their quills?! We have a wise leader – an example to the whole world. The people rallied around him and have become one soul and body, and will for centuries be devoted to their leader,” 31-year-old musician and actor Begmurad Amangulyev was cited as saying by Netherlands-based Turkmen.news.

In case that was not enough, it appears that the security services are busy rounding up anybody suspected of discussing the rumors. Chronicles correspondents claim three people were detained in the Lebap province on suspicion of spreading tittle-tattle that could destabilize the country.

In other business, construction work began on July 26 on a new part of the Afghan segment of a railway line connecting the Turkmen town of Kerki to Andkhoy in Afghanistan. A 10-kilometer stretch of track has been laid already on the Afghan side.

Turkmen state media is eager to point out that Ashgabat is underwriting the cost of the project, which is noteworthy indeed, as Turkmenistan is not usually one for shelling out its own money on infrastructure in another country. This financial commitment is evidence of Turkmenistan’s aspiration to become an important transit nation. The Afghan railroad is intended to be just one part of the Turkmenistan-Afghanistan-Tajikistan, or TAT, route that Ashgabat believes will culminate in the country serving as a bridge between the Asia-Pacific region and Europe. (Although Tajikistan has been dragging its feet over this initiative, the first deputy transportation minister offered some room for encouragement by stating earlier this month that a feasibility study should be completed by year’s end).

Turkmenistan is riding the crest of a wave of goodwill toward Afghanistan right now. State television has been making ample use of footage showing trucks carrying humanitarian supplies to the conflict-riven neighbor. A state news agency report from July 24 noted that the trucks – TV images indicate that there were at least three of them – carried medicinal supplies, clothes for children, school textbooks and candy. State TV showed pictures of officials plopping folded clothes next to barely sensate people in the hospital and heaps of a fizzy green drink and other undefined items piled up in a warehouse.

This positivity is not being reciprocated by other regional partners, however. A source in Pakistan’s government told Karachi-based newspaper The News International that Islamabad has no intention of contributing financially toward security for the Afghan section of the Turkmenistan-to-India TAPI natural gas pipeline. The same piece dwelled on Pakistan’s unhappiness over the price of Turkmen gas.

“We want Turkmenistan to review [the] gas price formula prior to [the] much awaited ground breaking of the portion of [the] TAPI pipeline in the territory of Pakistan,” the newspaper’s source said.

A Pakistani delegation is expected to travel to Turkmenistan in August to thrash out the matter. This is worrying business for the 11th hour given that the start of work on the Pakistan section of TAPI is scheduled for October.

For the coming couple of weeks though, all attention will be focused elsewhere. Namely, the Caspian Economic Forum, which is slated to take place August 12 at Turkmenistan’s Awaza tourist zone. According to the official website created especially for the event, the agenda will cover trade, transportation, energy, the environment and just about anything conceivably relevant to the Caspian. The list of corporate attendees is a familiar roll call of seasoned courters of the Turkmen government. There are energy industry players like CNPC, Tatneft, Dragon Oil, Petronas, Hyundai Engineering and Schlumberger. Construction companies, including Bouygues, France’s ever-dependable deliverer of garish neo-Sultan palaces, Vinci and Turkey’s Ronesans Insaat Taahhut (or Renaissance) will be on hand too.

What exactly is the point though?

The impetus for this forum was the signing – on August 12, 2018 – of the Convention on the Legal Status of the Caspian Sea by the heads of state of the five Caspian littoral nations. Ashgabat has concluded, not unfairly, that this document should be taken as the firing of the starting pistol on a phase of lively transnational economic activity among Caspian states and their neighbors.

But Turkmenistan continues to be its own worst enemy. The impenetrability of the country makes business dealings all but impossible for those without infinite patience or inside connections. The Caspian Economic Forum risks becoming just another one of Ashgabat’s pointless and costly displays of vanity.