In our weekly briefing: The Taliban visit Ashgabat, the dauphin is received by Uzbekistan’s president, and authorities tighten control after unrest in neighboring Kazakhstan. 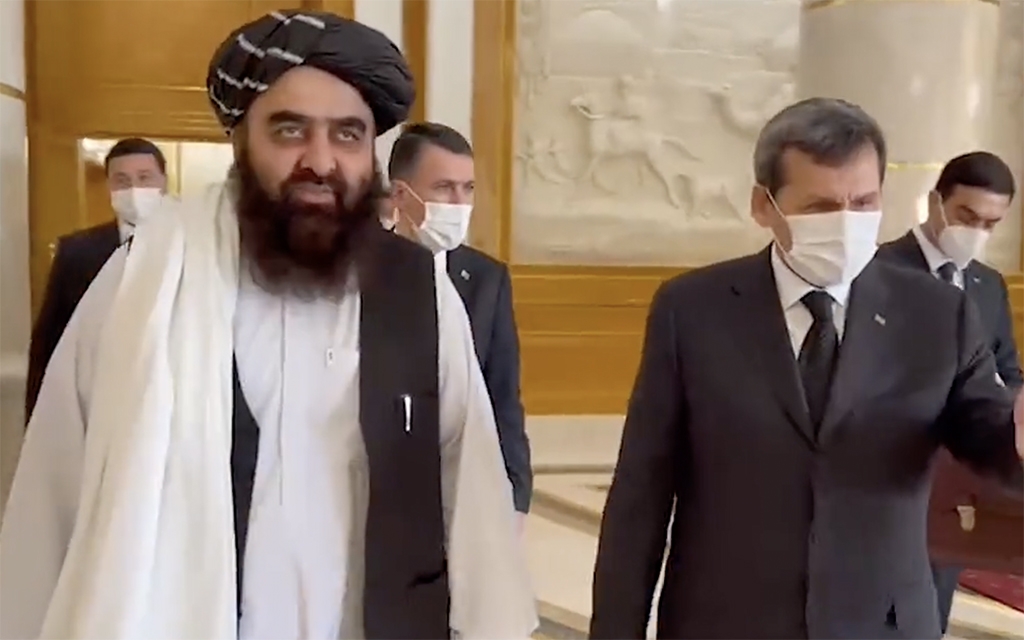 The Taliban arrived in numbers in Turkmenistan late last week.

These initiatives have in some shape or form been discussed for decades now, but there is a decided mood of do-or-die in the air these days. And so, attention is turning to pragmatic considerations like dates and money.

On the former point, the Afghan Foreign Ministry said in a statement that technical specialists from the two countries would meet for consultations on January 22. Work on continuing construction of the pipeline, power and railway projects, meanwhile, will resume in March.

As for funding, Kabul-based TOLO news cited an Afghan Foreign Ministry representative as saying that Turkmenistan would provide the money for Afghanistan’s work on TAPI in the form of a loan.

“We have agreed with Turkmenistan that it will lend to Afghanistan the expenses to pay, and Afghanistan will pay it back from the revenues of this project in the future,” Waliullah Shaheen, the director of strategic studies at the Foreign Ministry, was quoted as saying.

The size of the loan has not been disclosed, and the Afghans have not yet determined their budget for the project.

The daylong talks held on January 15 between Muttaqi and his Turkmen opposite party, Rashid Meredov, could not have avoided touching on the question of security. Official statements from the talks did not dwell on particulars, but the self-styled Islamic Emirate of Afghanistan had earlier pledged it would form an armed division of up to 30,000 fighters to ensure TAPI’s safety.

On January 17, once that Afghanistan business was done, deputy prime minister Serdar Berdymukhamedov, the son of the president, paid a working visit to Uzbekistan, where he met by President Shavkat Mirziyoyev.

That these two neighbors, with their almost 1,800-kilometer-long border, should be fast trading partners has dawned upon everybody involved exceedingly late in the day. Things took a turn after the passing in 2016 of the late and paranoid Uzbek dictator Islam Karimov. If bilateral trade in 2017 amounted to only $177 million, it had soared to $527 million in 2020.

These fleeting mutual trips across the border are intended to ensure that dynamic continues. Turkmen President Gurbanguly Berdymukhamedov laid important groundwork with his visit to Tashkent in October. Serdar Berdymukhamedov also met this time around with Uzbek Investment and Foreign Trade Minister Sardor Umurzakov. The vision is for the creation of a free trade zone on the border to serve as the cornerstone for a new resurgence in commercial exchanges. Business community representatives from both countries met in Tashkent while Berdymukhamedov junior was in town and signed several deals.

In his capacity as president-in-waiting, Serdar Berdymukhamedov is increasingly acting as Turkmenistan’s face to the world. But there has been persistent uncertainty about how long that wait is going to be. The 40-year-old has been cycled through a substantial number of important civilian government posts and there are precious few avenues of career progression, short of the presidency, left for him to explore.

The unrest that unfolded in Kazakhstan this month has made the matter only more confounding. There are two schools of thought on the matter.

When President Berdymukhamedov announced on January 7, just as the violence in Kazakhstan was peaking, that he was convening an extraordinary session of the Khalk Maslahaty (People’s Council), the senatorial upper chamber of the legislature, to be held in early February, it sparked rumors of a possible imminent succession development. The thinking is that since poor transition planning in Kazakhstan was partly the cause of that country’s political turbulence, the Berdymukhamedovs might want to get ahead of things in good time.

Sure enough, as RFE/RL’s Turkmenistan-based correspondents have reported, the authorities did adopt many suffocating measures to tamp down any emulation of the Kazakh events. These included increasing police presence in residential areas, random checks on people’s phones, and a nighttime curfew in the city of Mary.

Furthermore, Berdymukhamedov on January 12 instructed the National Security Ministry, the successor agency to the KGB, to strengthen control over the internet to prevent the spread of “information that harms the constitutional order of our state.”

“It is necessary to control the internet in accordance with requirements,” Berdymukhamedov told National Security Minister Gurbanmyrat Annayev in televised remarks.

Given that Turkmenistan already has some of the slowest internet connections in the world, this move was only guaranteed to make matters worse.

The wave of protests in Kazakhstan was initiated by discontent over rising prices for fuel, while it is the cost of food that has people in Turkmenistan upset. As RFE/RL also reported, police in Ashgabat have been visiting the homes of signatories of a petition against the scrapping of food subsidies in government stores that was doing the rounds last month. Many of the signatories were taken to police stations and threatened with criminal charges, the broadcaster reported.

Vienna-based Chronicles of Turkmenistan, however, has taken an exhaustive look at the dynamic of food price fluctuations and found a much more mixed picture. The website found, by comparing retail prices for many dozens of common items over the span of the past year, that food prices actually dropped by an average of 20 percent in the last quarter of 2021. This was attributed by the website to the recovery of the Turkmen manat against the dollar on the black market and the resumption of pandemic-affected trade with neighboring Iran. What is more, President Berdymukhamedov in December charged his son, Serdar, with ensuring that bazaars were offering reasonable rates ahead of the New Year holidays.

Since the New Year, though, prices have reverted to an upward trend, Chronicles noted.

Something else making a return is COVID-19. The authorities deny falsely that the coronavirus is not present in the country, and Amsterdam-based Turkmen.news has cited Turkmen government sources as saying that even the Omicron variety has been detected. The infected individual is said to be a Philippine national working at a field under development by Dubai-based company Dragon Oil.

RFE/RL’s Turkmen service, Radio Azatlyk, reported on January 17 that sweeping, lockdown-style measures are being reimposed. Markets, restaurants and other public facilities began to be shuttered without any explanation over the weekend. In the city of Mary, people have been banned from holding weddings and other types of large gatherings.

In one heartening development, Turkmenistan is moving ahead with construction of a modest 10-megawatt combined solar-wind power plant in the Balkan province. The plant would provide electricity to rural households near the artificial Altyn Asyr Lake, a water reclamation project. Funds for the project would be provided in the form of a low-interest, long-term $25 million loan from the Abu Dhabi Fund for Development.