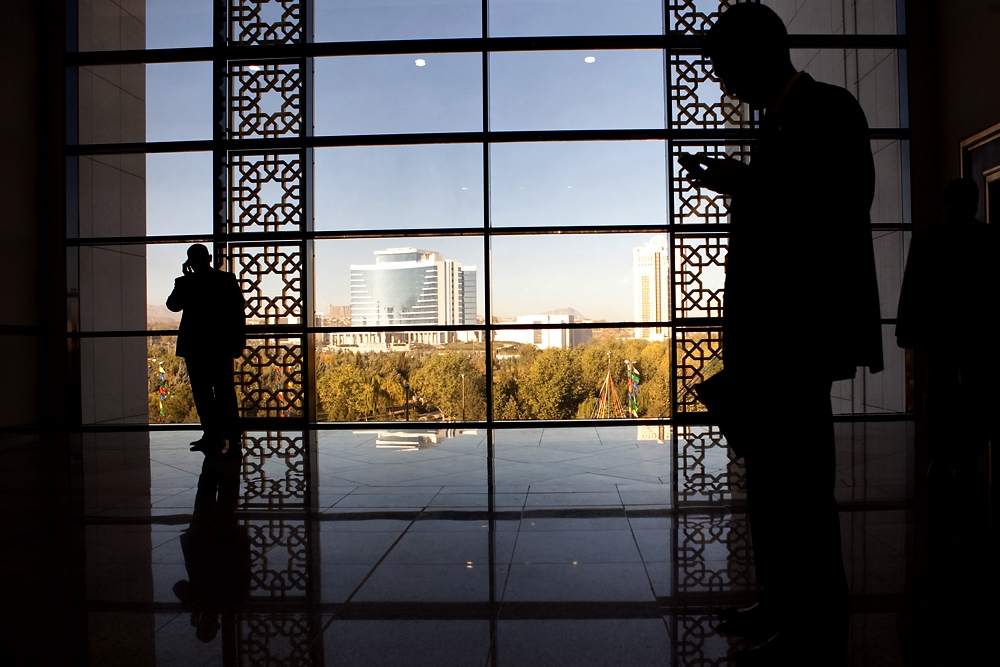 Russian telecom provider MTS, which left Turkmenistan in late 2010 after failing to renew a contract, may soon return to the Central Asian country. (Photo: David Trilling)

Though adept at Internet censorship and all-around snooping into private lives, Gurbanguly Berdymukhamedov’s regime in Turkmenistan seems incapable of thwarting citizens’ desire to communicate. As a result, it appears that popular pressure is prompting Berdymukhamedov to invite the Russian telecom provider MTS back to Turkmenistan.

Turkmen authorities abruptly booted MTS from the Central Asian state in late 2010 by failing to renew an operating agreement with the Russian company’s affiliate, Barash Communications Technologies Inc. (BCTI). At the time, analysts attributed the move to hostility in Ashgabat to Russian influence, as well as a desire by Berdymukhamedov’s regime to keep for itself the profits from the domestic telecom market.

But the Turkmen government’s efforts to act as a telecom provider over the past 18 months have been a dismal failure, according to users inside the country. Such an impression was confirmed in early May, when the Russian business daily Kommersant reported that Berdymukhamedov met with the Vladimir Evtushenkov, the director of AFK System, which owns a majority of stock in MTS, to discuss “the continued possibilities of the return of Russian telecommunications operator MTS.”

Another MTS affiliate, Mobile Telesystems, has received permission to resume service within three-to-four months, according to a report distributed by the Regnum news agency. A spokesman for the firm, Dimitry Solodovnikov, told EurasiaNet that the company had no comment on the possible return of MTS. Turkmen officials also have been silent on the issue. Efforts by a EurasiaNet correspondent to obtain official comment got caught up in an infinite loop of buck passing and unanswered phones.

Several factors may be behind the surprise reversal. For one, MTS, with the backing of the Russian government, is seeking compensation, claiming that Ashgabat’s actions in late 2010 violated international and domestic law. One Russian media report pegged the company’s loss at $855 million. MTS has filed cases at the International Arbitration Court at the International Chamber of Commerce in Geneva, and at an arbitration court in Turkmenistan. No verdicts have as yet been rendered. Thus, the potential return of MTS may be Berdymukhamedov’s way of trying to settle the case.

Probably a more significant influence on Berdymukhamedov’s thinking was the incompetence demonstrated Turkmenistan’s national telecom provider, Altyn Asyr. At the time MTS was forced out of Turkmenistan in 2010, the company had about 2.45 million registered clients, almost half of Turkmenistan’s population of 5.5 million. All those customers were forced to turn to Altyn Asyr for internet and telecom service, but the Turkmen provider hasn’t been able to keep up with demand. Accordingly, statistics show only about 1.5 million Turkmen are currently registered with the state company

Turkmen have long complained on social networking sites about Altyn Asyr’s poor service. The provider’s inadequate infrastructure is the cause of frequent dropped calls and an inaccessible Internet. Customers additionally bemoan high prices and long lines at company offices. One foreigner based in Ashgabat even accused the Altyn Asyr of financial funny business. “Sometimes on my phone, I’ll have 10 manats. And then I will suddenly have 9.50 manats. I think sometimes the clerk remembers your number and will take some money,” the foreigner said.

Poor service, especially Internet inaccessibility, isn’t something that would automatically concern Berdymukhamedov’s government. After all, Turkmenistan has a reputation for being one of the world’s most repressive states. But the level of dissatisfaction with Altyn Asyr must have reached a level that Berdymukhamedov felt he could no longer ignore. In the wake of the Arab Spring of 2011, Central Asian leaders have been more attuned than ever before to public opinion, even if they still maintain tight control over the political process. Berdymukhamedov, in particular, has seemed willing to make cosmetic changes out of an apparent desire to keep Arab Spring-like influences out of Turkmenistan.

“I would say that people were very angry about the services of AA [Altyn Asyr], and the Turkmen government was afraid of angering businessmen, the people with money,” a prominent blogger on Turkmen affairs, Annasoltan, wrote in a Skype interview with EurasiaNet.org.

It should be noted that news of MTS’ pending return to Turkmenistan set off a burst of excitement among Turkmen users. In a typical reaction, Mergen, a 17 year old in Ashgabat commented to Annasoltan’s blog; "Thank God! Soon I will be in touch with my friends.”

Ashley Cleek is a freelance writer who specializes in Central Asia affairs.