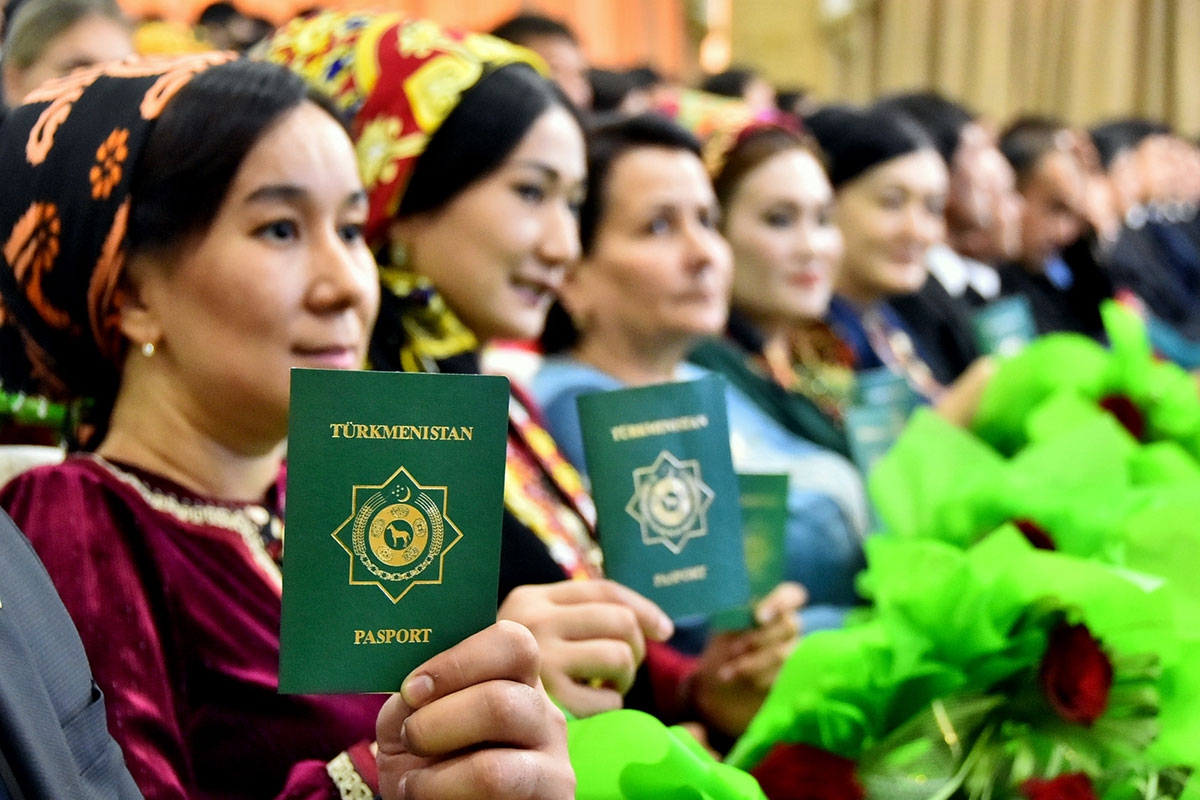 These will soon be even less useful if Ashgabat has its way. (government handout)

Many governments across the world lobby foreign partners to try and ease the ability of their citizens to travel across borders with minimal hassle.

The Foreign Ministry announced on September 3 that it was appealing to Turkey to temporarily reinstate visas for “various categories of Turkmenistan’s citizens.”

No details were provided, but the nightmare scenario is that Turkmen nationals could be deprived of the ability to stay in Turkey for periods of up to 30 days without a visa, as is now the case. That concession is ostensibly intended for tourists, although it is used widely by shuttle traders who depend on ease of travel for their livelihoods.

Ashgabat says the reason for its request is to improve and systematize how its citizens travel to Turkey, although this is an explanation that makes little sense.

Vienna-based Chronicles of Turkmenistan has reported on this long-bruited prospect since last year. Its sources have said that the plan is for visa application packages to be submitted in future to the local migration service before being forwarded to the Turkish consulate. In this optic, the motivation appears far clearer: The authorities are finding more ways to control the movement of their population and, wherever viable, to stop people from leaving the country at all.

Other reporting by Chronicles suggests that Ankara is dead set against the restoration of a visa regime. It is not hard to see why. The presence of a large and economically vibrant Turkmen diaspora on its soil lends Turkey a certain soft-power leverage and the end to the flow of people to-and-fro might put that at risk.

Something that the Turkmen government would happily like to see flowing westward toward Turkey is its natural gas. The main impediment there is the absence of a direct pipeline joining Turkmenistan to Azerbaijan, which are separated by the waters of the Caspian Sea. There was seemingly important symbolic movement on this front last week when Azerbaijan’s President Ilham Aliyev told Italian business news daily Il Sole 24 Ore that his government would support Turkmenistan if it decided to proceed with construction of the Trans-Caspian Pipeline, a putative project typically known by the acronym TCP.

This promising position is larded with caveats, however.

“The Trans-Caspian Pipeline has been spoken about for a long time,” Aliyev said. “This pipeline is a Turkmen project. It is the party that owns the [gas] reserves that needs to take this up. Transit countries can facilitate operations. If the Turkmens decide to go through with this project, we will support it.”

Russian news outlets lengthened and strengthened this quote by adding the line “but we will not be initiators here,” although going by the hard copy version of the interview, Aliyev did not utter those words.

Either way, Aliyev’s point is clear. Turkmenistan needs to do most of the running, and judging by public pronouncements and other indicators, TCP still feels like a secondary priority.

The far more complicated prospect of the TAPI trans-Afghan pipeline is more routinely discussed. In a gesture of humanitarian goodwill, Turkmenistan extended a hand of support to Pakistan, which would lie along the third notch of that pipeline, as it struggles to cope with apocalyptic floods.

An Ilyushin-76 cargo plane carrying an unspecified amount of medical supplies, food and other items flew into Karachi on September 5, much to the “sincere gratitude,” as the Turkmen Foreign Ministry had it, of Pakistani officials.

Generosity swings in many directions. Pakistan got humanitarian aid. And Russia is giving Turkmenistan a free park renovation.

State daily Neutral Turkmenistan reported on September 3 that St. Petersburg-based infrastructure giant Vozrozhdenie will use its own funds to modernize an Ashgabat park devoted to the 18-19th century poet and philosopher Magtymguly Pyragy. Work on the park will start this month and be completed in time for the presumed date of the poet’s 300th birthday in May 2024.

This sort of largesse is a good visiting card for Vozrozhdenie, which has won its fair share of juicy construction contracts in Turkmenistan over the years. And it fits neatly into Moscow’s broader charm offensive toward Ashgabat. Top Russian officials and business community representatives routinely come visiting in what looks like a concerted effort to keep Turkmenistan friendly in an increasingly Moscow-unfriendly world.

There may be a less benevolent accounting for this gift from Vozrozhdenie, though. In May, the head of the company, Igor Bukato, met with President Serdar Berdymukhamedov to show him the blueprint for a highway from the city of Garabogaz along the shores of the Caspian Sea to the border of Kazakhstan. The way these things are supposed to work, Vozrozhdenie should then have been declared the recipient of a contract to do that job. In mid-June, however, Berdymukhamedov signed a decree bestowing the contract on Altcom, a Ukrainian company. Perhaps the free work on the Magtymguly park might prevent such unwelcome surprises from occurring in future.

Neutral Turkmenistan reported on September 5 that the government plans to increase electricity production by 22.5 percent, to 37.5 billion kilowatt hours, between this year and 2028. This is the headline figure of Ashgabat’s plans to boost power infrastructure. Almost 3,300 kilometers of power lines will be installed across the country as government engineers work to compete a single unified energy grid by 2023. Part of the long-term intent is to boost exports. Buyers of Turkmen electricity currently comprise Afghanistan, Iran, Kyrgyzstan and

Turkmenistan, the Turkmen-language sister paper to Neutral Turkmenistan, on September 2 published a newly adopted law that will authorize school-leavers to go straight to university without first having to do their military service. This provision fixes a possibly unintended consequence of reforms to the education system implemented by the previous president in 2013. The switch from a mandatory 10-year basic education system to one which required young people to stay in school for 12 years meant that boys were typically finishing their studies no earlier than the age of 18. That is the age at which they are legally required to perform two years of military service. Anyone who can overcome the hurdle of university or vocational school entrance exams can now avoid that outcome.