Travel bans, dams and Russian fans. This and more in our weekly Turkmenistan briefing. 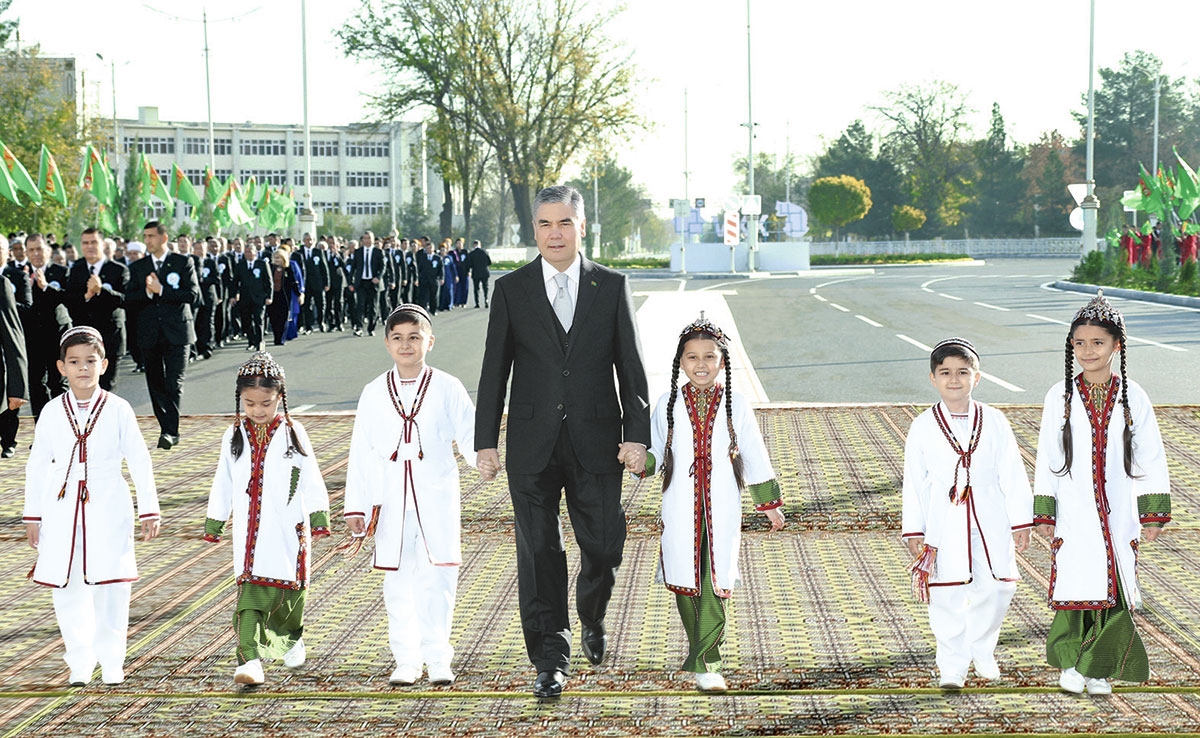 No crowds, except when he comes out. (state media)

The coronavirus fiction is slipping just a little bit more.

Authorities in Turkmenistan on November 23 imposed a ban on anybody aged over 50 traveling between regions and cities in order to prevent the spread of “acute infectious diseases.”

No mention is made of what specific disease this measure is meant to stem, but this is only because it is president-sanctioned policy to deny that any COVID-19 cases have been detected in the country.

In another clear anti-coronavirus move, a decision has been adopted to limit the number of people attending festivities this month and next to mark the 25th anniversary of Turkmenistan’s declaration of neutrality status. So, for example, the final of the youth singing contest Shining Star of the Year and other New Year’s celebrations will be broadcast on television, but no audience will be present.

There is an upside to this from the government’s perspective. As the Turkmen Initiative for Human Rights noted in its most recent digest, the authorities are making dexterous use of the pandemic to further clamp down any kind of independent social activity. If anybody were disposed to form a crowd for any reason, the police now have a ready pretext for dispersing them.

If President Gurbanguly Berdymukhamedov is the star of an event, however, such as the one on November 10, when he unveiled a dog statue and several new apartment blocks, large assemblies suddenly become acceptable.

Or there’s always bribery. Vienna-based Chronicles of Turkmenistan reported from the city of Turkmenabat on November 21 that although there is a prohibition on holding parties for weddings, birthdays and circumcisions, payment of a 5,000 manat bribe (around $200 at black market rates) to an Interior Ministry official is enough to get officials to look the other way.

In a bit of possibly unrelated health news, one of Berdymukhamedov’s most trusted deputy prime ministers, Shamukhammet Durdylyev, 57, has been hospitalized suffering from an unspecified heart condition. As RFE/RL’s Turkmen service, Radio Azatlyk, has noted, what is particularly unusual about this development is that it was state media that relayed the fact. Durdylyev served as mayor of Ashgabat until the start of this year, before being promoted.

Breaking the typical code of secrecy is likely more indicative of Durdylyev’s standing than any change in media policy. That said, the government is making microscopic steps toward overhauling its stiff, high Soviet-style propaganda machine. Part of that agenda has seen it reaching out to outside partners.

In 2019, the state news agency signed a memorandum of understanding on information-sharing – it was never explained quite what that meant – with the Russian state-owned broadcaster Russia Today, now known under the brand RT.

On November 23, Mir, another Moscow-based broadcaster that carries politically sanitized news from across the Commonwealth of Independent States, signed a cooperation agreement with Turkmenistan. The upshot of this is likely to be more reporting out of Turkmenistan, albeit on “harmless” topics, as Mir’s own report on the agreement indicated.

“In Turkmenistan, there is much to see and to tell Mir’s audience about,” a reporter for the broadcaster states in a TV segment, before carrying on to note how many marble-clad buildings Ashgabat has and how Turkmenistan has produced a one-ton carpet.

The semi-official news outlet Orient alluded to these kinds of tie-ups explicitly in a highly disingenuous and confused commentary about the dangerous proliferation of “fake news” about the coronavirus pandemic. The piece talks up the virtues of fact-checking as a way of countering false information – a characterization that one is presumably intended to apply to news from independent outlets reporting on the obvious fact that Turkmenistan is experiencing its own coronavirus outbreak.

Cooperation with partner countries, such as Russia, is intended to contain such problems, the article appears to suggest. But given the ways in which Russia has increasingly criminalized free expression and stamped out independent media, this suggestion is clearly nonsensical. The desire, it follows, is for Turkmenistan to become more creative in its weaving of fantasies.

Turkmenistan often casts itself as an important player in the future development of Afghanistan and it has signaled that again by attending this week’s Afghanistan Conference, co-hosted by Finland and the United Nations. The ministerial-level event is intended as a forum for discussing international commitments toward advancing development and stability in Afghanistan over the next four years. Ashgabat’s contribution was to announce that a 500 person-capacity mosque whose construction it is funding in the Afghan border town of Aqina is set to open soon.

On the eve of that conference, Turkmenistan and Afghanistan pledged to strengthen cooperation on the use of transboundary rivers – namely the Amu Darya, Murghab and Hari. Former Soviet republics have ostensibly been in some kind of dialogue on water issues for decades, if not always on peaceable terms, but engagement with Afghanistan is rarer.

As something of a hydro-hegemon in the region, Afghanistan is eager to develop its hydropower potential, but that has obvious implications for downstream nations like Turkmenistan. One case in point is the Afghanistan-India Friendship Dam commissioned in 2016. The associated hydropower plant provides power to thousands of Afghan households and provides irrigation across 750 square kilometers, but by stemming the Hari River, it reduces how much access Turkmenistan and Iran get to the water.

Establishing solid lines of communication and eventually, maybe, a formal set of agreements on use of water resources is considered crucial to fostering amicable regional integration. Discussions between Ashgabat and Kabul on rivers need to be considered in that perspective.

This is certainly the kind of thing that the U.S. State Department is envisioning as it cycles through the Central Asian states and eggs them into direct engagement with Afghanistan in addition to operating through cumbersome multilateral formats. Top foreign ministry representatives from the United States, Turkmenistan and Afghanistan held an inaugural trilateral meeting in October to get that ball rolling.

How U.S. President Donald Trump’s decision to hastily draw down troops in Afghanistan will affect all this painstaking bridge-building, however, will only become clear with time.

The national currency, the manat, is showing fresh signs of weakness. Radio Azatlyk reported on November 23 that the black market rate in the Lebap province slipped from 23 to the dollar to 25.60 over the past week. Prices for food and other staples have in the meantime spiked, by about 10-15 percent, the broadcaster’s reporters have said. In the Mary province, there are reports of people having to sell off their belongings to pay for food, Radio Azatlyk claimed.

This level of indigence has not gone unnoticed even in friendly Russia. An analyst for a Moscow-based outfit called Alpari may have been ventriloquizing for Moscow when he talked in an interview for commentary website PolitExpert about how a turn to Russia would be in Turkmenistan’s interests.

"Russia has a very large market. For that market to absorb the exports of such a small country as Turkmenistan is very easy,” Alexander Razuvayev told PolitExpert.