Digital import substitution, currency restrictions, and a cemetery looted for scrap: This and more in our weekly Turkmenistan briefing. 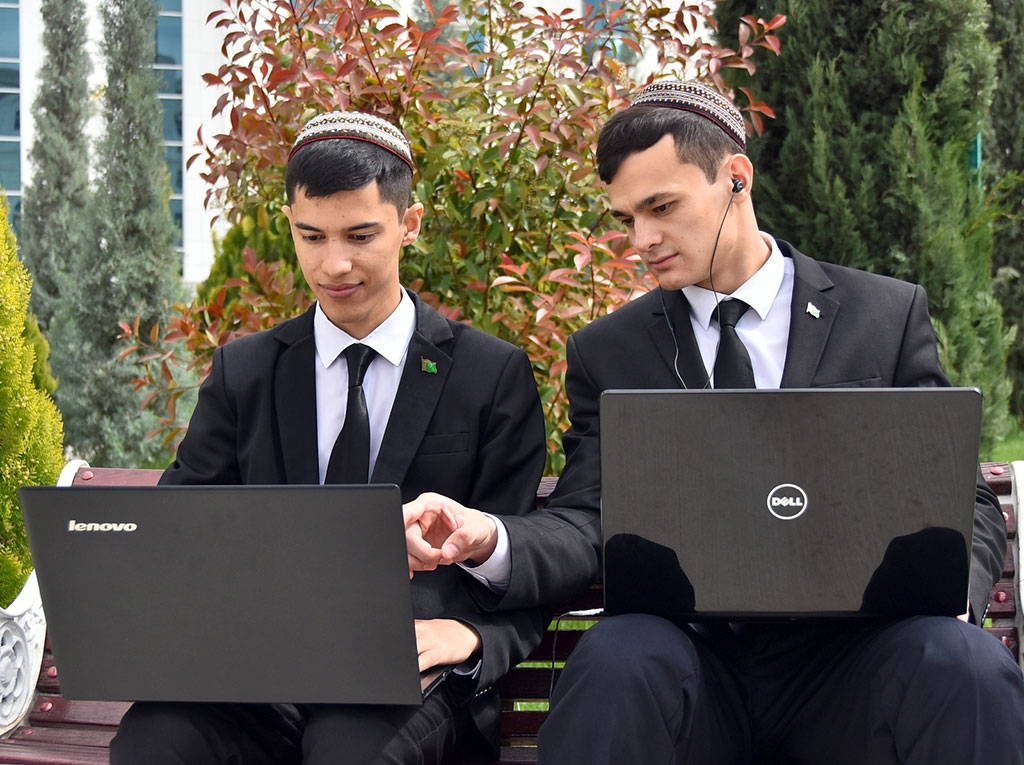 Internet users are accustomed to having someone look over their shoulder. (state media)

Turkmenistan and the internet are not friends.

Censorship is ubiquitous. Access to social media websites is particularly closely monitored, when and if it is allowed.

As RFE/RL’s Bruce Pannier wrote earlier this year, the war against unwanted information has latterly taken a new turn, with the authorities trying to clamp down on VPNs – the pieces of software that enable users to circumvent blockages.

In addition to falling back on censorship, the Turkmen regime also tries at times to remedy its conundrum at the supply end. This week saw the presentation of a new, domestically developed messaging app and email services.

Tmchat is intended as an analogue to WhatsApp and is available for download from international platforms like Play Store and Apple’s App Store. Sanly.tm, meanwhile, is an email service offering up to 1 gigabyte of storage space.

Will anybody take the bait? Almost certainly not.

As Vienna-based Chronicles of Turkmenistan has suggested, products like Tmchat are likely designed to try to displace IMO, the only vaguely mainstream messaging app that is not banned. But Tmchat’s designers have already set themselves up for failure. Only subscribers of local mobile operator Altyn Asyr can register for an account, meaning that the network is quite cut off from the rest of the world.

In any case, since it is 100 percent guaranteed that any communications exchanged on either Tmchat or Sanly.tm will be open to scrutiny from government agents, their appeal is necessarily minimal.

The experience of another hapless attempt at digital import substitution offers some clues about this oddly constrictive choice. In late 2018, a local software company launched a copy of Facebook called Bizbarde. Chronicles quickly set up a page on the site, only to be blocked within one day. As even the regime-friendly news website Turkmenportal was compelled to point out at the time, this was not a one-off. Three previous attempts to create a similar site – Arzuw, Yashlyk and Iminami – quickly withered on the vine. And Bizbarde too has ended up joining that ignominious company.

And it is difficult to be too upbeat about the prospects of Belet, a paid Turkmen-developed mobile app that is touted as an alternative to YouTube.

This fervor for IT flows to a considerable extent out of President Gurbanguly Berdymukhamedov’s ceaseless and two-faced exhortations to embrace digital technology. Addressing the remote attendees of a recent telecoms trade show in Ashgabat, the president revisited his recurrent mantras about how local enterprises must master “innovative technologies” and how big data and the transition to 5G are the way of the future.

In this spirit, children are encouraged to familiarize themselves with computers from a young age. Turkmenportal accordingly reported on December 5 that first-graders are being given free laptops as a New Year’s gift. The website claims, citing the Neutral Turkmenistan newspaper, that the computers “meet world standards,” although if experience is any guide, it is very possible the laptops are little more than souped-up toys.

Berdymukhamedov is even eager to have betting on horses go online. No more informal, man-to-man bets inside the hippodrome, which has traditionally been the norm, but digital tote betting. As the president told a December 7 government meeting on agricultural policy, digitizing gambling on horses could even generate an interest in Akhal-Teke horses and Turkmen equestrian sports overseas.

But the fate of people like Rozgeldy Choliyev, a 26-year-old Turkmen student living in Russia, are more useful illustrations of how the government views the internet. A full account is provided by Amsterdam-based Turkmen.news. When Choliyev ran into significant bureaucratic trouble trying to receive money from his parents in Turkmenistan to help him through a moment of financial hardship, Choliyev did what a lot of peers around the world do in such times: He took to the internet – YouTube, to be exact – to complain. That sparked months of terror and harassment for Choliyev.

The Turkmen consulate contacted the Russian security services, who harassed Choliyev on Ashgabat’s behalf. Then the man’s parents were summoned for intimidating questioning by the National Security Ministry, the latter-day KGB, in Ashgabat. His brother, a policeman, was demoted and threatened with dismissal.

The kinds of currency transfer limitations that Choliyev was griping about have only got worse. Turkmen.news reported on December 3 that the amount that can be sent abroad through Western Union, for example, has been halved to $108, which means recipients, typically students abroad, only get around $100 once commissions are factored in. As of October, the website reported, people in Turkmenistan were also able to make bank transfers worth up to $300 monthly.

Currency restrictions are probably linked to the turbulence recorded on the unofficial exchange market. Although the official rate is firmly stuck at 3.5 manat to the dollar, the black market is more reflective of reality. Chronicles says that while from mid-November to the start of December, the manat slid from 25 to 27 against the dollar, the rate has at some points dropped as low as 30. The figure tends to fluctuate throughout the day, the website noted.

In one of those grim reminders of how economic decay demoralizes and demeans people, Turkmen.news has reported that National Security Ministry agents are having to guard the Russian cemetery in the city of Mary because unemployed people are stealing the metal fences from around graves to sell for scrap.

The crime that Berdymukhamedov made a show of trying to combat this week was drug-smuggling. In another of his choreographed-for-TV performances, he drove out into the desert, 100 kilometers from Ashgabat, to visit a newly built facility for the disposal of illegal narcotics – a giant furnace, in other words. Why it had to be located quite so remotely is anybody’s guess. Security officials watched as their leader took the lead in destroying confiscated drugs.

“The head of state, Gurbanguly Berdymukhamedov, delivered several packages of smuggled goods into the red-hot mouth of the oven,” state media explained. “The assembled followed the example of the leader of the nation and also took part in incinerating the drugs and psychotropic substances.”

These kinds of pointless antics are what Berdymukhamedov lives for, but the website of the United Nations office in Ashgabat featured a piece on more useful work being done by Turkmen citizens. Under a UN-led program, a group of 45 specialists has been recruited to provide what is described as “inclusive, quality and community-based social services.”

The UN is far too diplomatic to spell it out, but the testimony of one team member suggests that this novel approach is intended as a better-curated process that is more contingent on patient dialogue with social support recipients than the traditional one-size-fits-all approach.

“I thought I was tolerant, but … training increased my potential of acquiring informed tolerance, that is understanding issues of vulnerable people and improving my professional competency of working with them,” one budding social worker, Mahri Rejepova, is quoted as saying.

It is a novelty in Turkmenistan for the state to be listening instead of just eavesdropping.