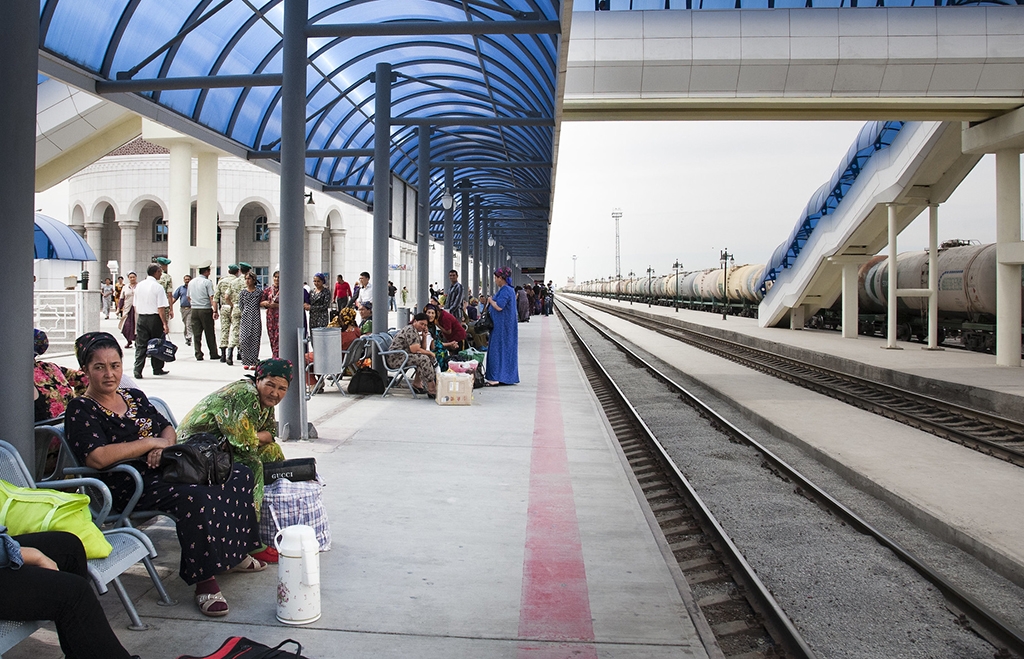 It is a matter of great frustration to Turkmenistan’s government that it cannot easily persecute foreign-based critics.

Not that it stops them from trying. And often succeeding.

On February 18, Myalikberdy Allamuradov, a young Turkmen man studying at the Kalmyk State University in the southern Russian city of Elista went onto a main square to hold a one-person picket. As a fellow student filmed, he held up a sign reading “The Turkmen dictator has robbed us of our money!” Police detained him, fined him, and handed his case to prosecutors.

Allamuradov’s solitary demonstration was in response to the difficulties Turkmen students abroad have faced in receiving money from their relatives back home as a result of onerous restrictions imposed on cash transfers.

University administrators reached out to the Turkmen consulate in Astrakhan to let them talk to Allamuradov directly, but the conversation was abruptly interrupted when the student was caught trying to make a recording of the exchange.

Amsterdam-based outlet Turkmen.news says a court hearing is expected on March 11. So long as Allamuradov is in Russia, he is relatively safe, but a conviction could lead to his expulsion and forcible return to Turkmenistan.

The story of Omriuzak Omarkuliyev illustrates what is at stake. In 2018, Omarkuliyev, who had engaged in some largely apolitical activism while studying in Turkey, was lured back to Turkmenistan and then jailed on spurious grounds. It was later reported he had been sentenced to 20 years in prison. After the case drew some international attention, however, authorities let slip that Omarkuliyev had supposedly been enlisted to do a two-year stint of military service. His current whereabouts are unknown.

Memorial, a venerable Moscow-based rights group, reported on March 1 that Turkmen law enforcement authorities are on the hunt for a former Ashgabat resident who acted as a source for their recent and detailed look at the state of prisons in Turkmenistan. It appears that police were able to identify the woman from the details of her account. Since she is abroad, however, they had to settle with intimidating relatives still inside Turkmenistan.

“If she once more utters the names of Interior Ministry personnel, she will rot in prison,” one officer is said to have told one of the relatives, who include her husband.

Later, Russian police and the Federal Security Service began questioning the source’s acquaintances in Moscow to try and work out her whereabouts, Memorial reported.

Memorial’s first two articles in a planned three-part series detailing the horrors of Turkmen jails are available here and here (in Russian).

Turkey is also not safe. Last month, a group of activists based there planned to hold a rally on Istanbul’s Taksim Square to mark their anguish over the passing of a 14-year-old boy who died in Turkmenistan as a result of what appears to have been a savage beating. According to one account, the boy, Suleiman Tursunbayev, had refused to throw a judo match and was punished for his insolence.

But as Memorial reported, prior to the planned February 19 picket in Istanbul Turkmen nationals who had planned to get involved began to receive intimidating calls from Turkish police. The rally was called off as a result.

Cooperation between Turkmenistan and Turkey is deepening on all fronts. On February 23, Foreign Minister Rashid Meredov embarked on an official trip to Ankara during which he met with Turkish President Recep Tayyip Erdogan. Later in the same visit, a trilateral meeting was held between Meredov, his Turkish counterpart Mevlut Cavusoglu and the foreign minister of Azerbaijan, Jeyhun Bayramov.

A Turkmen Foreign Ministry readout of this exchange was not especially informative, but it did note that Bayramov remarked upon the “importance and timeliness” of a January memorandum of understanding signed by Azerbaijan and Turkmenistan on the joint development of a long-disputed Caspian gas field, known variously as Dostluk or Dostlug.

The agreement “opens wide horizons in the light of increasing mutual understanding and regional cooperation on energy,” Bayramov is quoted as having said.

The outbreak of bonhomie between Ashgabat and Baku has put the Trans-Caspian Pipeline firmly back onto the agenda, and enthusiasm from Ankara could in turn spell positive things for Turkmen gas eventually reaching buyers in Europe.

Moving around is getting slightly easier for people too.

The state-run Turkmenavtoulaglary coach company has announced that it is reviving its Ashgabat-Dashoguz route on a test basis after a one-year pause brought on by the COVID-19 pandemic. Turkmen authorities claim mendaciously that the country has recorded no COVID-19 cases. All other routes are still suspended, however, until April 1 at the earliest.

There is light relief for train users as well. The national railways company said it has resumed its Ashgabat-Turkmenabat service, although trains will run only once a week. As with the long-haul buses, all other routes are still suspended.

Turkmenistan Airlines, though, says it is rolling over its cancellation of international flights to March 31 at the earliest.

On February 28, air carrier S7 performed its seventh repatriation of Russian nationals since flights were suspended in March 2020. Arzuw News reports that 173 passengers were on the plane.

Two days before that, a train carried 161 people trapped in Turkmenistan by COVID-19 across the border into Kazakhstan. It appears most were Kazakh nationals, but there were some Turkmen migrants too. Turkmen.news noted, citing unnamed sources, that Turkmen authorities are not expending much energy trying to organize a reverse flow of their co-nationals trapped in Kazakhstan.

United Nations employees will have an easier time of it as of March 2. Under a freshly approved presidential decree, foreigners with UN passports will be permitted to enter Turkmenistan visa-free for up to 30 days.

Still, let it not be said that President Gurbanguly Berdymukhamedov does nothing for his own people. TDH state news agency has reported that 60 manat will be given to working women on the occasion of the March 8 holiday of International Women's Day. As Chronicles points out, this is worth a princely $2 at the black-market exchange rate.