Turkmenistan: The weight of this sad time we must obey 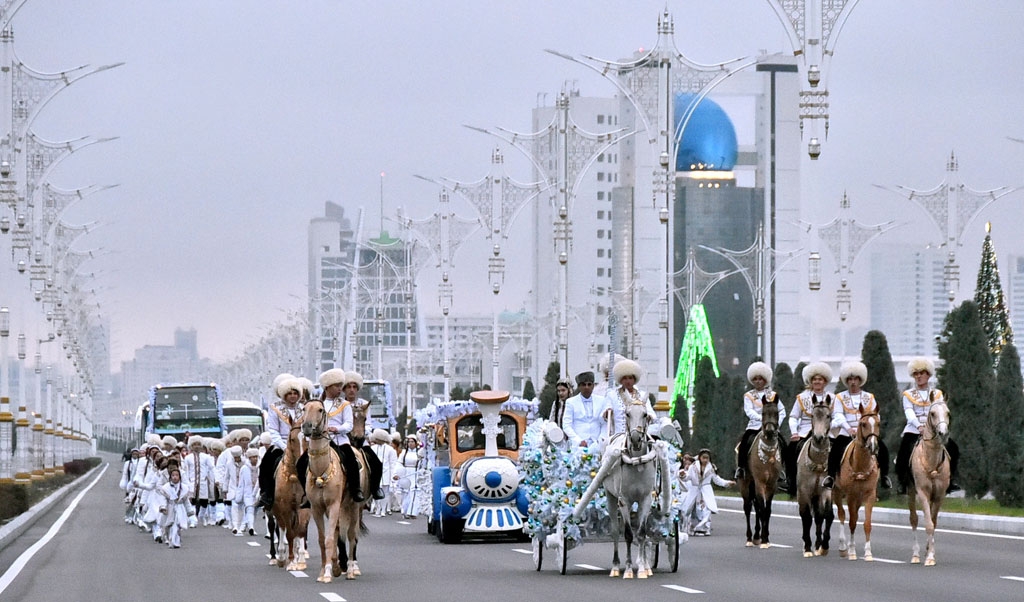 Turkmenistan’s official government website this week featured an article about a deluded leader whose demise is brought about by a sequence of capricious and arbitrary decisions.

The piece describes this ruler as “drunk with illusions of omnipotence” and “expectant of submission and flattery.”

It was, of course, a review of a local staging of King Lear. But it does often feel like President Gurbanguly Berdymukhamedov must draw on that tragic Shakespearean figure’s personnel management techniques in running the country.

This was a week marked by big firings and dressing-downs. On December 14, state media announced that Deputy Prime Minister Kerim Durdymyradov, who oversaw the industry portfolio, was dismissed. He had received his final warning only 10 days earlier. Industry Minister Khoshgeldy Mergenov also got his marching orders.

At a Cabinet meeting, Berdymukhamedov declared that Nepes Gailyev's removal as minister for textiles on December 11 was motivated by acts of bribe-taking. Gailyev’s direct superior, Durdymyradov, looks prone to being caught up in this mess.

Two other deputy prime ministers – Esenmyrad Orazgeldiyev, who oversees agriculture, and Myratgeldi Meredov, who is in charge of fuel and energy matters – received formal rebukes.

This is no time to be fiddling with personnel charged with running the energy industry. Foreign Minister Rashid Meredov said at the December 14 Cabinet meeting that a maiden Caspian Economic Forum will be held in Turkmenistan next August 12. The date is significant because it will mark the first anniversary of the signing of the Convention on the Legal Status of the Caspian Sea, which suggests that Turkmenistan may wish to use the event to advance its agenda on the construction of a trans-Caspian pipeline.

Sure enough, investors are sniffing around for potentially related work. A Saudi state media outlet reported that Bader bin Bahishan al-Busais is exploring opportunities in Turkmenistan. Al-Busais is the managing partner of Global Projects Development Holding Company and visited Turkmenistan previously, in September. His company specializes in advising on the development of energy and water infrastructure projects. The promise of Saudi interest is not all pie in the sky. Last month, Turkmenistan received $40 million worth of pipes courtesy of the Saudi Fund for Development.

At the same time, Turkmenistan is seeking more trade with Saudi’s bête-noire, Iran. Iranian State media on December 11 reported that Ashgabat has agreed to talks on allowing Iranian rail wagons onto its tracks.

In 2014, the leaders of Turkmenistan, Kazakhstan and Iran attended an inauguration ceremony for a new railway route linking all three nations. The plan was for annual cargo capacity on the line to rise from an initial 5 million tons to 20 million tons in 2020. And yet, Iranian state media reported that the volume of commodities exchanged between Iran and Turkmenistan through the railway crossing in the most recent Iranian calendar year had reached just 1.97 million tons. This is highly partial information, but the suggestion is that the promise of 2014 has not come to fruition.

There was some good news about the China-Central Asia gas pipeline. Kazakhstan’s Deputy Energy Minister, Magzum Mirzagaliyev, announced on December 11 that the route’s annual capacity had increased by 5 billion cubic meters to 55 billion cubic meters following the construction of two new compressor stations. Regrettably for Turkmenistan, it appears most of this new capacity will be reserved for Kazakh exports.

A delegation led by U.S. Special Representative for Afghanistan Zalmay Khalilzad was greeted this week by Meredov, the foreign minister. State media cited Khalilzad as praising Turkmenistan's infrastructure projects in Afghanistan. It made no mention of U.S. Secretary of State Mike Pompeo's announcement the same day about Turkmenistan being designated a "country of particular concern" under the Frank R. Wolf International Religious Freedom Act.

This act lays out a series of potential White House responses to the designation to be issued within 90 days. It also sets an annual mandate that the U.S. president review the measures. Whether or not Turkmenistan sees any fallout should be known by late February.

There are more signs the budget is creaking. Things have got so bad that provincial governors have reportedly been ordered to fill their own coffers, instead of expecting allocations from the central government. RFE/RL's Turkmen service, Radio Azatlyk, reported that local authorities responded by extorting citizens and issuing spurious fines.

The Vienna-based Chronicles of Turkmenistan reported that residents of Mary province are now limited to withdrawing 200 manat at a go from local ATMs. That is about $57 at the official exchange rate, but closer to $10 at the black-market rate. It is possible this is a nationwide policy. Azatlyk noted it was also apparently the case in Lebap province.

In an interview to The Diplomat, Chronicles of Turkmenistan editor Farid Tukhbatullin estimated unemployment at around 60 percent and that as many as 500,000 citizens are now living abroad. That is roughly one-tenth of the population. Much of this is conjecture and guesswork. The state provides no credible data on employment or, for that matter, up-to-date information about the size of the population.

Some citizens were afforded a dose of mercy. Berdymukhamedov engaged in his periodical exercise of clemency by authorizing the release of 796 people from prison under an amnesty announced on the eve of Neutrality Day, which is celebrated on December 12.

Turkmenistan's holiday season is well under way. On December 15, a New Year Tree was lit up amid great fanfare. A man in a pig costume made onto a public stage in images shown by state media, despite reports in the last couple of weeks that porcine displays were to be banned. (It will be the year of the pig, according to the Chinese calendar, from February 5).

Speaking of farm animals, the government has declared another import-substitution triumph. Turkmenistan has launched two cattle-breeding complexes to raise Holstein, Angus and Simmental cattle brought over from Europe. How these poor native German, Scottish and Swiss strains will adapt to the scorching conditions of Turkmenistan will be seen.

Government-aligned news outlet Orient announced that Turkmenistan’s first-ever record label, Music Planet, which was founded last month, will host a New Year’s concert in Ashgabat on December 23. No word yet on whether Berdymukhamedov will take part. But given his penchant for breaking out the turntables around New Year – even teaching his grandson to DJ in 2016 – hopes are high.