Turkmenistan: They call me Mr. Boombastic

For all the bombastic propaganda, there is no papering over the fact that Turkmenistan is still clearly struggling with a COVID-19 problem. 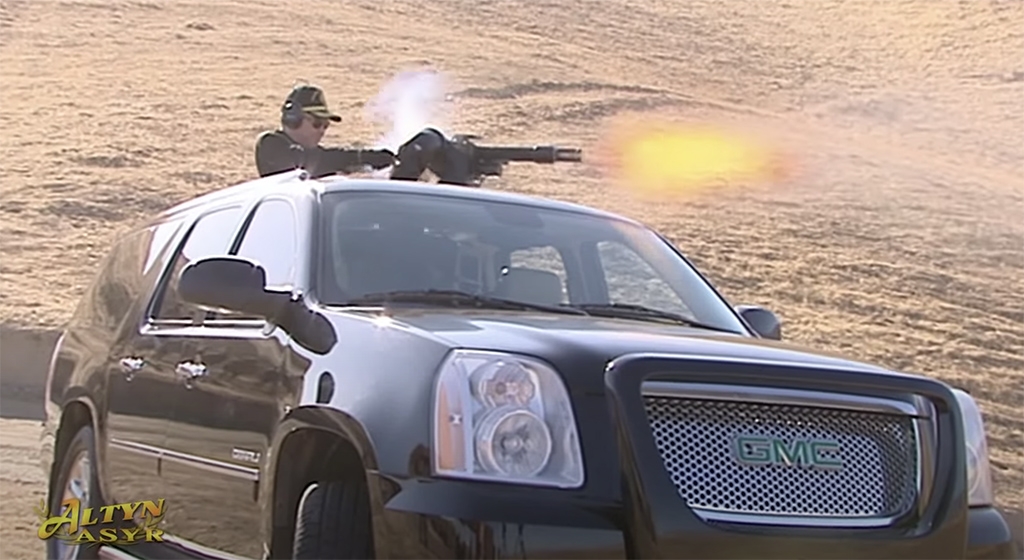 The reliable flow of news about the leader of Turkmenistan’s zany antics often blinds distracted observers to the arbitrary severity of the repression over which he presides.

Consider the ways that the government is enforcing its coronavirus prevention measures.

RFE/RL’s Turkmen service, Radio Azatlyk, reported on September 1 that people in the Mary province unable to pay 60 manat ($17) fines for failing to wear masks are being sent by police to pick cotton. Each violator is required to gather 20 kilograms of cotton daily.

Amendments have been made to the criminal code envisioning prison terms of between two and five years for people deemed to be evading treatment for “dangerous infectious diseases.” The changes came into effect upon publication in state media on September 7.

Strict rules have been drafted worldwide to stem the spread of the coronavirus, but there is an important distinction to be considered in Turkmenistan. And that is that conditions at quarantine and treatment facilities for coronavirus – whose presence in the country the authorities still do not acknowledge – are known to be abysmal.

In a September 7 account on life in a quarantine center in the Lebap province, Amsterdam-based Turkmen.news described how people confined to shared tents are not provided with soap, toilet paper or even water with which to wash themselves. The food provided by the camp is inedible, so internees have to rely on relatives to deliver relief parcels. Phones are not allowed, lest anybody think to document the conditions. It is hardly surprising that many would want to flee such places, not least since they are more likely to spread disease than contain it. Doing so, however, will now potentially trigger those aforementioned punishments.

While dissidence inside the country is not tolerated in any shape or form, the past few months have seen the emergence of a lively community of anti-government activism outside the country. This has mainly manifested in pickets outside Turkmen embassies in places like the United States, Turkey and Cyprus – all home to sizeable diasporas.

Representatives from a group calling itself the Democratic Choice of Turkmenistan assembled at the Turkmen Embassy in Washington on September 1 to hold a protest against proposed changes to the Constitution. Vienna-based Chronicles of Turkmenistan reported that the ambassador, Meret Orazov, did not come out to meet the protesters, preferring instead to summon the police and report the picketers for incitement to terrorist activities.

Filing a false police report – a misdemeanor, incidentally – is all Turkmenistan’s man in Washington can do. State thugs back home can resort to far more forceful measures.

Moscow-based rights group Memorial issued a statement on how 48-year-old lawyer Pigambergeldy Allaberdiyev was detained on September 5 in the western town of Balkanabat on suspicion of ties to activists in the foreign-based protest movement. As is customary, the interrogation of Allaberdiyev by officers with the National Security Ministry, which is the renamed KGB, took place without a legal representative present. Attempts by relatives to deliver food and drink were rebuffed, Memorial said. Allaberdiyev is now facing terrorism charges.

Religious dissidence is treated no less harshly. The Jehovah’s Witnesses this week said that they had received confirmation that an 18-year follower of their faith, Myrat Orazgeldiyev, was sentenced to a term in prison on September 3 for declining to pursue military service duties. A spokesman for the community said that there are currently 11 Jehovah’s Witnesses in prison in Turkmenistan for conscientious objection. “Young Christians like Myrat would be happy to perform alternative service. Instead, they are thrown into prison, where they are stripped of the opportunity to support the families and community they love,” Jarrod Lopes, spokesman for Jehovah’s Witnesses, said in a statement.

Disdaining military service should, in any case, be a matter of basic common sense as much as principle. Turkmen.news has reported that at least 14 conscripts died as a result of a September 3 accident near the town of Serhetabat. A truck overloaded with around 40 men was traveling on an uneven road back from a pistachio field, where the conscripts had been used as free harvesting labor, when it flipped over.

Life in the army is not seen in this light in the nether dreamworld inhabited by President Gurbanguly Berdymukhamedov. The evening news on September 2 used the excuse of a military preparedness drill to trot out another segment on the president’s martial fantasies, which this time included him firing with unerring precision at target practice cutouts. The nadir of the day’s larks was Berdymukhamedov blasting a pile of oil barrels with a machine gun mounted on a GMC Yukon Denali.

The editing and arrangement of these reports are so absurd as to raise the improbable suspicion that the halls of Turkmen state broadcasters are in fact teeming with subversives. If anything, though, Berdymukhamedov seems to think they don’t go far enough. At a Cabinet meeting on September 4, he instructed the deputy prime minister with the portfolio for culture and media, Myahrijemal Mammedova, who started her job in July, to ensure that state broadcasters use more “powerful material,” whatever that means.

In another piece of personnel management at the Cabinet meeting, Deputy Education Minister Merdan Govshudov, who had been given a reprimand on August, was fired for failing to properly acquit his duties. There are evident signs of tumult in the educational sector. Turkmen.news reported on September 5 that the principals of two elite schools in Ashgabat have been detained, likely on corruption charges as admission is often secured by means of bribes. Last month, there were reports that parents at another school had mounted a spontaneous protest after learning that the Russian-language department was to be closed. Schools providing instruction in Russian are deemed particularly desirable and are, therefore, more prone to extortionist practices.

For all the bombastic propaganda, there is no papering over the fact that Turkmenistan is still clearly struggling with a COVID-19 problem. The latest is that the closure of mosques is being extended to October 1, as is access to the Awaza tourism zone. Restrictions on activities such as swimming in the Caspian have been in place since mid-May.

Police are now enforcing a ban on setting up tents to celebrate events like weddings, birthdays or charity dinners, apparently to prevent the assembly of large groups, Chronicles has reported. What is unclear, though, is whether this is a COVID-19 measure or one of the many reported heightened security precautions being adopted ahead of a convening of the Khalk Maslahaty, or People's Council, on September 25 to change the constitution.

Another ostensibly important win was claimed last week for the vision of turning the Turkmenistan-Afghanistan-Pakistan-India, or TAPI, gas pipeline from distant fantasy to hard reality. The memorandum of understanding signed on August 31 by Turkmen and Afghan officials envisions the acquisition of the necessary land in Afghanistan. The Afghan Mines and Petroleum Minister Mohammad Haroon Chakhansuri is projecting work to start in Afghanistan by early 2021, once the land acquisition process is completed.

Turkmen Foreign Minister Rashid Meredov on September 2 discussed progress on the project with the chairman of the Afghan Central Bank, Ajmal Ahmadi, but a Foreign Ministry readout of that exchange provided few useful details. Seeing as Ahmadi has been a reliable presence at TAPI fund-raising excursions to places like the United Arab Emirates, however, it is probably safe to assume money was high on the agenda.