Turkmen elites and Berdymukhamedov’s friends prosper despite floods and shortages. 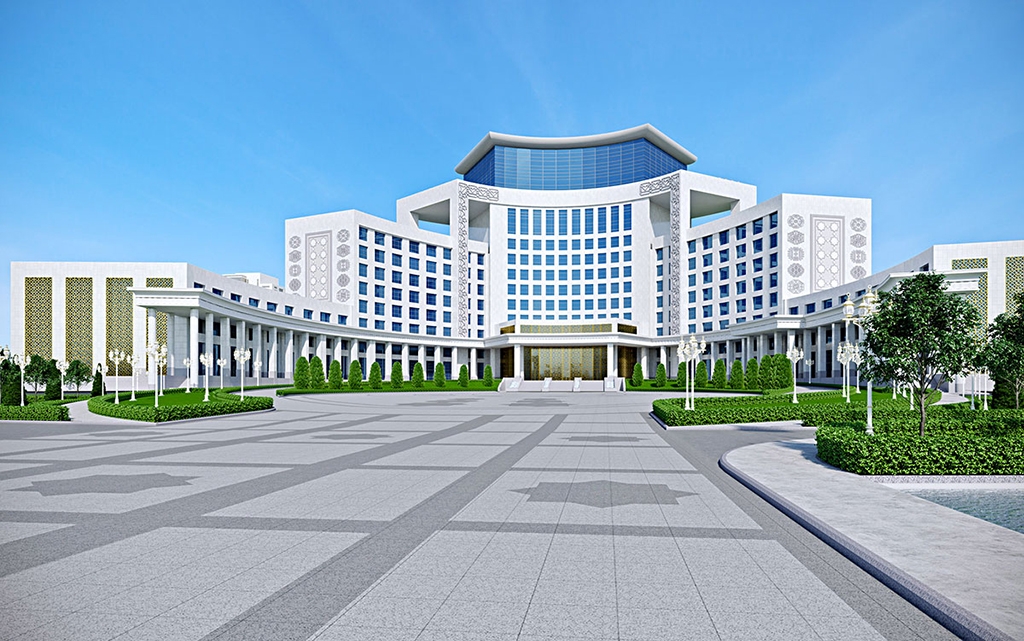 Turkmenistan has trouble making money and yet is adept at wasting it. For example, here's a rendering of a luxury hotel the French industrial group Bouygues is building in Ashgabat. (turkmenistan.gov.tm)

For the third time in the space of six months, Miller on March 27 visited Turkmenistan’s capital in what looks like yet another attempt to revive the supplies of Turkmen gas to Russia. It had been hoped the deliveries might start up again in January, but that came to naught.

Miller gave away little in his interview to Turkmen state media other than that Gazprom is eager and willing. The received wisdom is that the sticking points are price and the duration of the delivery contract — Turkmenistan likely wants something lasting decades, while Russia is thinking about the short-term.

Another well-known Russia business leader, Turkmen-born Igor Makarov, also came calling. Makarov had previously sought to develop a Caspian Sea oil concession known as Block 21 through his company ITERA, which was sold to Russia's state-owned Rosneft. He is now taking a second bite at the cherry. Makarov’s new venture ARETI (ITERA written backward) and state oil company Turkmennebit signed a memorandum of understanding about cooperation on a new field, Uzynada. Turkmennebbit did exploration work on the field last year.

In his capacity as a member of the management committee of the cycling ruling body Union Cycliste Internationale, or UCI, Makarov had a ready bauble to dangle before President Gurbanguly Berdymukhamedov. The Russian talked up his host’s professed devotion to cycling, perhaps subtly implying that the UCI might at some stage see its way to hosting events in Turkmenistan.

Turkmenistan splurged with an estimated $5.5 billion on creating required infrastructure for the 2017 Asian Indoor and Martial Arts Games. And yet, all those facilities have been to little competitive use since that time.

So it will have come as happy relief when the head of the International Sambo Federation announced on March 29 that Ashgabat had been chosen as the site of the sport’s 2020 World Championship.

Finally on the front of energy business and foreign courtiers, Italy’s Undersecretary for Foreign Affairs Manlio Di Stefano swept through Ashgabat with a retinue of businesspeople involved in oil and gas, defense, telecommunications and finance, among other sectors. While Di Stefano was upbeat about opportunities, he was also indelicate in some of his language in a Facebook post about his visit.

“[Turkmenistan] is certainly not easy, but it has great potential when you think about how it is the fourth most important country in the world by gas reserves and a huge importer of industrial machinery,” he wrote.

Turkmenistan has trouble making money and yet is adept at wasting it, so it is no surprise it has gained such a foul reputation as a delinquent debtor.

RFE/RL's Turkmen service, Azatlyk, reported that the delivery of packages from Russia to Turkmenistan has been suspended since March 27 due to accumulated debts owed to the Russian postal service by its Turkmen counterpart.

On March 29, the Vienna-based Chronicles of Turkmenistan reported that around 20 Turkish nationals owed unpaid salaries by Turkmen companies held a demonstration the week before outside the country's embassy in Ankara. The workers are threatening further protests if the issue remains unresolved.

Inside Turkmenistan, many are running short not just of money but also the things people would want to buy with it — namely, food. In February, a woman died in the town of Dashoguz in a crush at an ATM outside a local bank in yet another reminder of the chronic cash shortage gripping the country. Last year, breadlines even reached the capital, Ashgabat.

In the most recent such grim account, the Chronicles of Turkmenistan reported that an elderly man died on March 27 in the city of Bayramaly in a crush outside a store as dozens lined up to buy bread.

These kinds of daily tragedies do not get coverage in officially sanctioned media. But Ashgabat does acknowledge fatalities in neighboring countries, like Iran, to which it extended sentiments of condolence in the wake of devastating rains and resultant deadly floods in that country’s northern regions.

No such messages were sent by the government to its own citizens affected by similar deluges right across the border. A video uploaded by the Chronicles of Turkmenistan on April 1 shows the city of Bereket completely underwater. Azatlyk also revealed that more than a dozen houses in Mary province's Tagtabazar district were destroyed by floods on March 28, and rainwaters likewise blighted Ahal province's Etrek district the following day.

Netherlands-based outlet Turkmen.news last week ran a deep-dive about the many riches accumulated over the years by the Turkmen ambassador to the United States, Meret Orazov.

Orazov, the second-longest serving ambassador in Washington, has proven a survivor. He remained in his post even after the death of Turkmenistan's first president, Saparmurat Niyazov, under whom he had previously served as foreign economic affairs minister. Though he would not be appointed ambassador until 2002, Turkmen.news alleges his initial investments into the United States, made through the Oronco Investment & Development Corporation, began in 1994. This entity was involved in allegedly fraudulent sales and repurchases of a house on Washington’s Westover Place NW as recently as 2010.

That is only the beginning of Orazov’s real estate investments in the United States, which are concentrated in the D.C. metro area.

The official Orazov family residence is in Washington’s Spring Valley neighborhood and was purchased in April 2005 for $1.8 million. Orazov’s wife, Irina, owns an apartment in nearby Chevy Chase, Maryland. A second home on Westover Place was purchased by Orazov's daughter in 2007, although it was apparently subsequently leased to other Turkmen officials. In 2013, she purchased an apartment in McLean, Virginia.

The family owns assets further west, too, including a home in Orem, Utah, which it acquired in 2007. Finally, the Orezovs have been buying up property on Anderson Island in Washington State's scenic Puget Sound since 1996.

Turkmen.News estimated the value of the properties at more than $6 million.