A cratering economy, the world’s slowest internet, and the army takes charge of food production. This and more in our weekly Turkmenistan briefing. 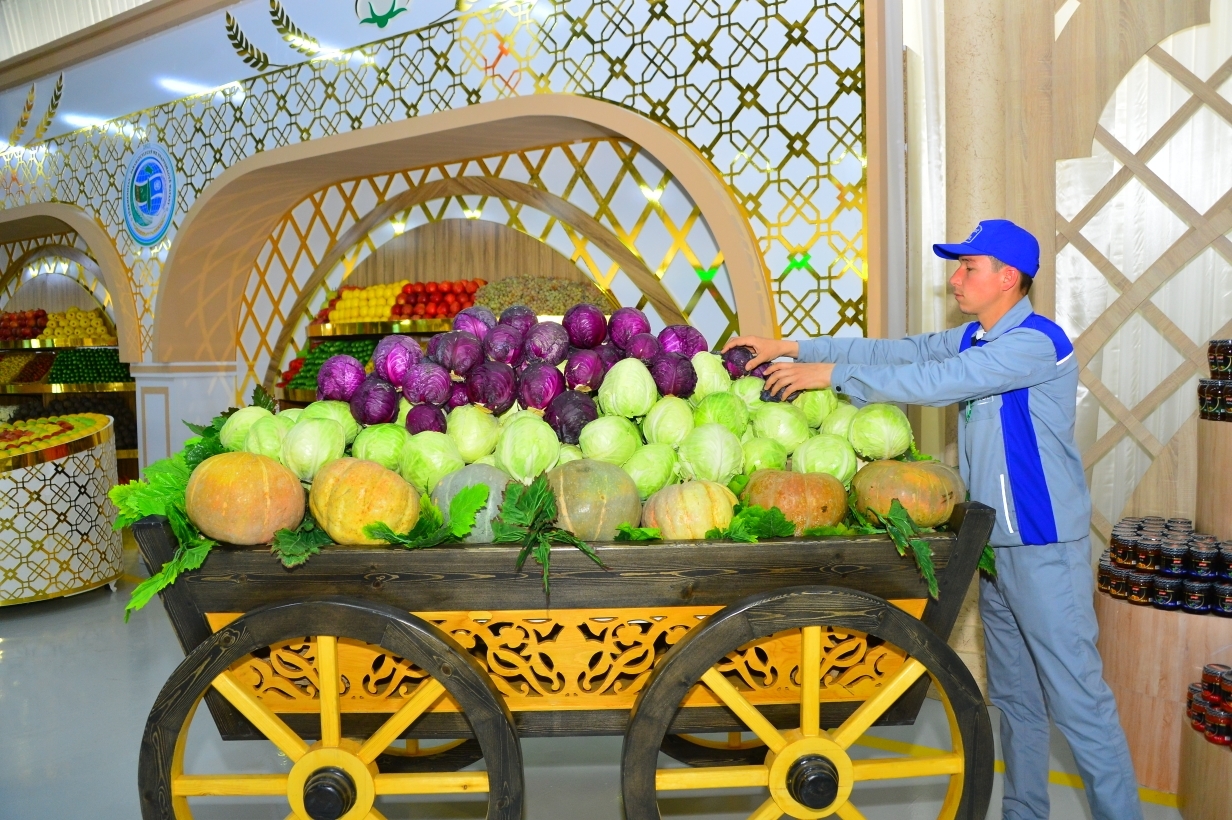 The government is working hard to create the impression of food abundance. (state media)

Turkmenistan’s government is very much the This is Fine meme brought to life.

One needs only replace the insouciant cartoon dog surrounded by rising flames with President Gurbanguly Berdymukhamedov and the country’s economy.

There was something of a mild reckoning with reality at a Cabinet meeting on December 3, however, when Berdymukhamedov approved an anti-crisis program. Not that this means that Ashgabat acknowledges that there is a crisis. The Cabinet meeting heard the familiar refrains about how the “dynamic pace of gross domestic product growth has been ensured” – a claim supported with the customary flurry of unverifiable production, trade and retail figures.

The anti-crisis program is, in the description of state media, merely designed to prevent Turkmenistan being adversely affected by “complications in the global economy.” This will be achieved through support for small and medium businesses, the drumming up of fresh foreign investment, and the preservation of living standards, TDH news agency stated. No costed roadmap for this plan has been made public.

The picture of living standards drawn by RFE/RL’s Turkmen service, Radio Azatlyk, is a grim one indeed. Attempts by the government to create the impression of food abundance are illusory, Azatlyk insists.

The broadcaster’s correspondents talk of dwindling volumes of affordable and desirable foodstuffs. State-owned stores receive stocks of locally produced poultry, but shopkeepers put at least half of it aside for sale at twice the price on the private market, according to one correspondent in Ashgabat. Subsidized beef, meanwhile, is said to be often of highly dubious quality. And though the value of the Turkmen manat has made some gains against the dollar on the black market in recent months, prices for potatoes, vegetables and bread are inching upward.

The value of remittance payments from Turkey, where large numbers of Turkmen nationals have settled and found work, has in the meantime been sliding as that country’s currency, the lira, plunges to historic lows. Azatlyk cites the Turkish migration service as saying that around 118,000 Turkmen nationals have received residence permits since the start of 2021. The figure for last year was around 87,000.

State media made a point of noting that the anti-crisis plan, which has been drawn up by Berdymukhamedov’s son and presumed heir, Serdar, was dispatched into the ether via the government’s much-vaunted digital system, whatever that means. Digitalization has been embraced by Berdymukhamedov as the cure-all solution for guaranteeing healthy agricultural output and cutting back on bureaucratic inefficiency. The annual gifting of laptops to small schoolchildren by the state is meant to underscore how the entire population is to be engaged in this technological leap forward.

All of which makes it embarrassing that, as RFE/RL reported this week, Turkmenistan has been found to have the world’s slowest internet. The broadcaster cited the website Cable.co.uk as noting in a report that internet speeds in Turkmenistan are so slow that it would take almost an entire day to download a 5-gigabyte movie file.

Almost as if responding to that report, the government website published an article on December 2 reminding readers that the Turkmen telecommunications agency is still in the process of implementing projects funded by a $273 million loan from the Jeddah-based Islamic Development Bank to carpet Turkmenistan with high-quality mobile connections. The loan was, as Vienna-based Chronicles of Turkmenistan has pointed out, issued in 2018, which suggests that there has been a lot of foot-dragging going on. The national telecommunications provider, Altyn Asyr, says it is committed to further lowering internet tariffs and extending the fiber-optic cable network. Until that happens, Turkmenistan will languish among the ranks of the region’s internet losers – Tajikistan and, to a much lesser extent, Uzbekistan – while Kyrgyzstan and Kazakhstan race ahead.

There is also the state’s incurable paranoia to be considered. Even as Berdymukhamedov chunters on about digitalization, the security apparatus is working hard to keep Turkmens safe from the perils of free-flowing information. Until censors feel like the country’s internet firewall is sufficiently solid, there are few grounds for expecting connections to improve.

While the general public doesn’t often get breaks, the bureaucratic machine does. Neutral Turkmenistan daily newspaper on December 4 reported that Berdymukhamedov has signed a decree granting government bodies at all levels a one-year grace period to pay back loans issued to them by domestic banks. Credit and interest owed by January 1, 2022, will accordingly not be due for payment until January 1, 2023. That these loans exist at all is part of a grand efficiency plan that envisions state bodies increasingly paying their own way. How local governments are supposed to raise money to pay back interest-accruing loans is a puzzle.

In another cryptic episode of securitized bureaucratic tinkering, Berdymukhamedov has approved the creation of an economic oversight department operating under the auspices of the State Border Service. The work of this body was described in the December 3 edition of Neutral Turkmenistan as pursuing the aim of improving agricultural productivity, livestock- and poultry-rearing, and fish-farming. Nothing quite screams “this is fine” like putting the job of hitting food production quotas in the hands of the armed forces.

Turkmenistan is sticking, even in the face of grim news on the spread of a new variant of COVID-19, to the line that it has not registered a single case of the novel coronavirus. Authorities are nevertheless reintroducing restrictions on people’s movements and implementing contagion-busting measures of dubious utility, Azatlyk reported on December 7. Recently reopened bazaars and shops in the Lebap province have been shuttered. Plans to reopen mosques have been scrapped. In at least one district, municipal workers are once more spraying the streets with chlorinated water.

Not that any of this will dampen the government’s desire to party as the year winds down. Berdymukhamedov has said that he wants Cabinet officials and regional government heads to ensure that celebrations for Neutrality Day and the New Year proceed with the required degree of pomp.

A curious historical tidbit was thrown up this week courtesy of the screening of an Oliver Stone-fronted series of interviews with Kazakhstan’s former President Nursultan Nazarbayev. The former Kazakh leader claimed to Stone that as the Soviet Union was rapidly careering toward dissolution, the late Turkmen leader Saparmurat Niyazov suggested to his Central Asian colleagues that the soon-to-be-independent southern republics form a Republic of Turkestan.

Nazarbayev, who casts himself in the role of wise whitebeard amid a group of panicking peers, says he dismissed the idea out of hand.