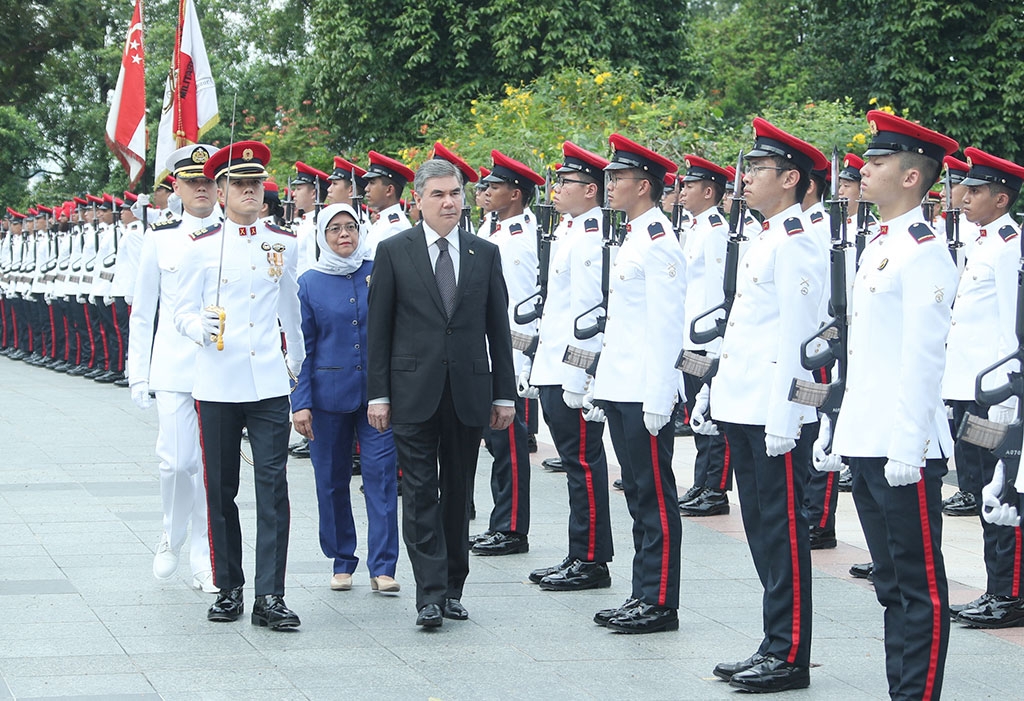 The practice of requiring parents enrolling first-graders and aspiring college students to provide a detailed tabulation of family members going back three generations dates to the days of Turkmenistan’s late president Saparmurat Niyazov.

As the Chronicles of Turkmenistan has reported this week, ever more people are being made to provide this potted familial history.

The Vienna-based website claimed that senior leadership in the security bloc – meaning the military, security services, police – have since March had to provide the names, details and addresses of its relatives every two or three months. Police precinct commanders have reportedly also been ordered to gather the same information from all citizens under their purview.

The exact purpose of the üç arka maglumat, as this document is known, is uncertain. But a good operating theory is that it constitutes another means of applying moral pressure on a demoralized population.

Even the things that should be plentiful are running short.

RFE/RL’s Turkmen service, Radio Azatlyk, reported on August 20 that motorists in the Mary and Lebap provinces have been experiencing shortages of higher-quality A-95 gasoline. Instead, drivers are forced to fall back on A-80 gas, which is bad for cars and pollutes more. This is ironic since President Gurbanguly Berdymukhamedov is all about ecology these days – vide his record-setting 35-minute lecture on the topic earlier this month. There is a money-making angle here though. As Azatlyk reported, police are stopping motorists for spot emission checks and fining them if their vehicles chug filthy smoke, which they invariably do since they can only buy cheap gas.

Cash machines in the regions are still short of liquid funds (Turkmen manat, not dollars), so the sight of giant early-morning lines is still commonplace. This situation even moved Berdymukhamedov on August 19 to deliver a dressing-down to Central Bank chairman Merdan Annadurdyev, who was ordered to fix the problem immediately. The solution adopted in the Lebap province, according to Azatlyk, has been for police to detain and interrogate hopeful bank customers and warn them to stop hanging around ATMs. It is mainly state employees that have salaries paid directly onto their cards.

Currency controls are evidently the response to a strengthening dollar, which has been causing headaches across the region. Chronicles reported on August 25 that the dollar is trading at 17.9 manat (for purchase) and 18.2 manat (for sale) on the black market, up from around 17.7 manat a week earlier. (The official rate of 3.5 manat to the dollar is an artificial abstraction that has nothing to do with reality).

Chronicles also reported, on August 26, that private businessmen working with foreign partners have for the past two months been unable to secure dollars. It was always difficult to get foreign cash – the lifeblood of any enterprise. State banks previously agreed to convert no more than 2 percent of a business’s balance. But with that now whittled down to zero, defaults, failed deliveries and broken deals seem inevitable.

Not everybody is unhappy about the poor performance of the manat though. Even people who used to be able to afford a summer holiday at a cheap Turkish seaside resort, now find that this relatively economic option is no longer within their reach. Compounding the problem are the intense airport checks and the rising cost of airline tickets. This has compelled many to fall back on Awaza, the white elephant Caspian resort willed into existence by Berdymukhamedov in 2007. Such is the demand that it is becoming hard to find vacancies, according to Chronicles.

Just up the road, meanwhile, in the port town of Turkmenbashi, many households have even complained of chronic, days-long tap water shortages. This unexplained shortfall precipitated a rush to buy bottled drinking water, which in turn led to a near doubling of prices.

In official accounts, the theme of the week has been Singapore. Berdymukhamedov flew to the economic powerhouse – one of the Asian Tigers of lore – on August 26 for a two-day visit that should, in the telling of state media, augur a new era of prosperous commercial exchanges. Bilateral trade turnover in 2018 reached a relatively modest $43.4 million, but Singaporean business representatives were diplomatic enough to note this was a fivefold increase over 2016.

This is Berdymukhamedov’s first foreign visit since the death rumors. He stayed in Singapore at the Shangri-La Hotel, which is the same hotel patronized by U.S. President Donald Trump last June at the time of his historic informal summit with North Korean dictator Kim Jong Un. Staying at the St. Regis Singapore, a hotel just a few hundred meters down the road that was the choice of Kim’s retinue, might have invited some unfortunate parallels.

When they drift off to sleep, Central Asian leaders love to think fondly of the Singaporean model – which is understood to mean vibrant and rigorously managed economic development with limited political freedom. Berdymukhamedov is no exception and alluded to this very thing in an address to the local business community on August 27. Speaking of his nation’s supposed economic reforms, its “open door” policy and favorable geographic location, the president appeared to fondly imagine himself as Lee Kuan Yew of the Karakum.

But in terms of brass tacks, the first day of Berdymukhamedov’s stay produced little of note.

The inaugural Singapore-Turkmenistan Business Forum generated nine agreements, seven of which were the ubiquitous and often damp squib-producing memoranda of understanding, or MOU. Some of the more potentially consequent MOUs involved Turkmenistan’s chemical and fertilizer sectors. Talk of cooperation in education could presage another slim option for profoundly underserved, aspiring Turkmen college students.

In a show of optimism, the Turkmens organized a fair of manufactured goods, such as toiletries, detergents, shoes that they presumably hope Singaporeans will wish to import or re-export. The prospect of the Turkmens selling such goods (the packaging of which is often brazenly copied from well-known Western brands) on the southeast Asian market feels remote, to say the least.

On the energy front, before Berdymukhamedov’s visit had concluded, one item of business had been done. Turkmen state media reported that Ashgabat had reached a deal with Singapore-based GP Global to build a natural gas compressor station at refining facility in the central Karakum desert. The compressor will be able to pump 2 billion cubic meters of gas annually and should be in operation by February 2022.