Ashgabat has pursued a notably distinct line in its engagements with the Taliban. Our weekly Turkmenistan briefing. 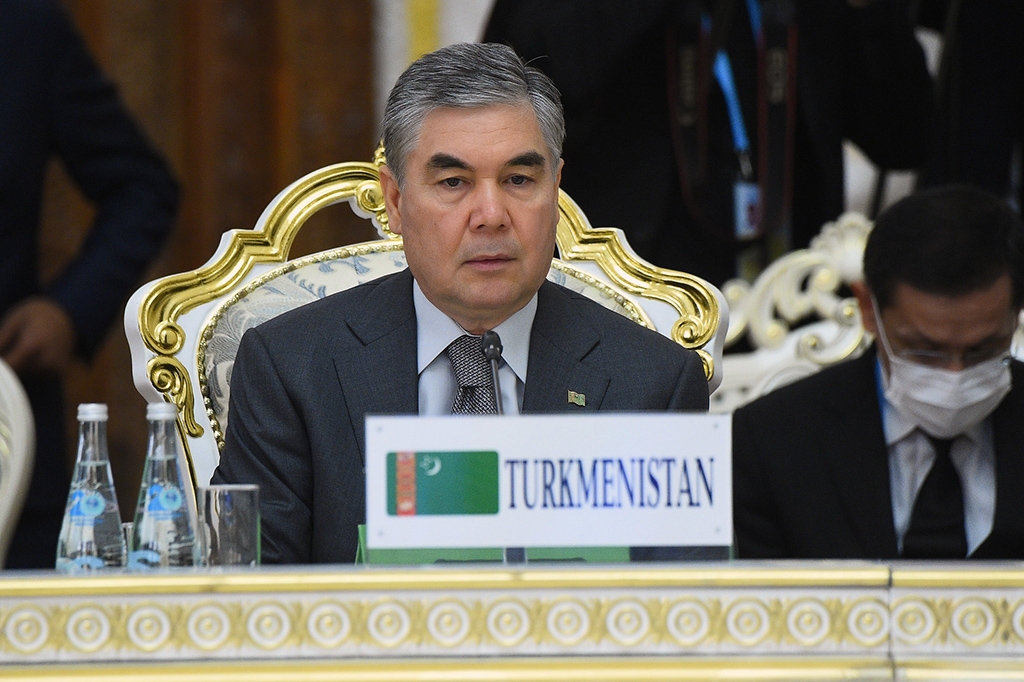 Afghanistan is on his mind, but not his lips. (Tajik presidential administration)

State television reported before his departure to Dushanbe that he would be holding “an array of bilateral talks” on the sidelines of the September 17 summit. In the event, however, the state news agency reported on only two meetings – one with Iranian President Ebrahim Raisi, and another with his host, the Tajik leader Emomali Rahmon.

Unlike many other attendees at the summit, Berdymukhamedov did not namecheck Afghanistan directly in his platitudinous and detail-free plenary session speech. The reason for this is that Ashgabat has pursued a notably distinct line in its engagements with the Taliban regime. While it has yet to formally recognize the new government in Kabul, Turkmenistan never entirely ceased cross-border trading; it has engaged in high-level interactions with the Taliban from the very moment they marched into Kabul.

All the same, Berdymukhamedov talked about Turkmenistan’s preparedness to interact with the SCO on terrorism and drug-trafficking.

That Afghanistan is on Berdymukhamedov’s mind – his insouciance notwithstanding – was revealed by a Tajikistan presidential office statement about talks between the leaders.

“The two heads of states asserted that they both support a timely settlement of the conflict in this nation engulfed by the flames of war,” Rahmon’s office said, using the kind of language that Ashgabat avoids like the plague.

In other business, Rahmon petitioned Berdymukhamedov for Tajik freight companies to be granted greater access to Turkmenistan’s high-tech Caspian seaport.

The tête-à-tête with Raisi was more strictly business-related. Turkmennebit, the state-run oil company, reported on its website that Ashgabat and Tehran have finally agreed to resolve the issues that brought a halt to the supply of Turkmen natural gas to Iran in 2017.

The most recent major development in this spat arrived in June 2020, when an International Chamber of Commerce panel ruled that Iran was at fault for failing to pay in full for gas bought between 2007 to 2013. Iran was accordingly liable to pay Turkmenistan around $2 billion to settle the debt.

If the presidents are talking about a breakthrough, it might signal a resumption of those supplies in the near future.

Turkmenistan is at the moment almost entirely reliant on China to buy its gas, but news from there has been encouraging at least. According to freshly released Chinese trade data from July, as extrapolated by Moscow-based business news website Finmarket.ru, Turkmenistan was during that month earning $238 for every 1,000 cubic meters of gas sold to Beijing. This compares favorably with the tariff paid to Kazakhstan and Uzbekistan, which earned $195 and $193 per 1,000 cubic meters of gas, respectively, not to speak of the $171 rate charged by Russia.

As Finmarket explained, Russia’s arrangement with China locks prices in on a quarterly basis, meaning that the $171 rate, which is an increase on what was paid in previous quarters, will be in place until the end of September. The arrangement with Turkmenistan is, however, shrouded in mystery, so the extent of Ashgabat’s relative gains is unclear. But we do know that Turkmenistan delivered 2.77 billion cubic meters of gas to China in July, implying one-month gross revenues of $642 million.

This is all welcome background noise for the revelry being planned for festivities on September 27 to mark the 30th anniversary of independence.

A grand observation rostrum has even been built for Berdymukhamedov to watch the military parades. This new bit of infrastructure has generated so much excitement that the Neutral Turkmenistan state newspaper devoted an entire front page to a report on its unveiling on September 16.

Where the old rostrum was in central Ashgabat in front of the presidential palace, this much larger one has been moved to a still-lightly developed area in the south of the city.

“It spans across an area of 20,450 square meters. It is lined with granite and snow-white marble, and the complex incorporates a two-story building topped with a dome,” the newspaper notes effusively. “The seating area can accommodate 2,000 guests.”

The crowning glory is a 120-meter LED screen, which Neutral Turkmenistan says is the largest of its kind anywhere in Central Asia.

The old rostrum, meanwhile, is to be turned into a business center, presumably in keeping with Berdymukhamedov’s agenda of transforming Turkmenistan into a full-fledged market economy.

No such facility exists for members of the public wishing to register their unhappiness. When a group of around 30 women mustered outside a government building in Ashgabat on September 13, they were immediately approached by security and ordered to disperse, according to Vienna-based news website Chronicles of Turkmenistan. Complaints apparently touched upon the problems of unemployment, the unaffordability of food, and cutbacks in the amount of food being made available to the public at subsidized prices. The women had clearly not been apprised of the exciting possibilities of living by the rules of the free market.

This could soon become somebody else’s problem.

As RFE/RL’s Bruce Pannier has noted in a fascinating piece of Turkmen Kremlinology, another possibly consequential event being held around the Independence Day season is a session of the recently created Senate, which goes by the name Khalk Maslahaty, or People’s Council – a name formerly reserved for a different consultative body.

Pannier points out the neat symmetry of Berdymukhamedov’s son and presumed successor, Serdar, turning 40 on September 22. That is the age at which Turkmen citizens are eligible to serve as president. Could it mean that the long-anticipated handover of power might be in the offing?

It’s a bold prediction, although there is no reason to believe transition of leadership will translate into a commensurate change in the way the country is led. Any switch will be purely cosmetic.