The newly formed Senate will be able to bestow titles upon the president. 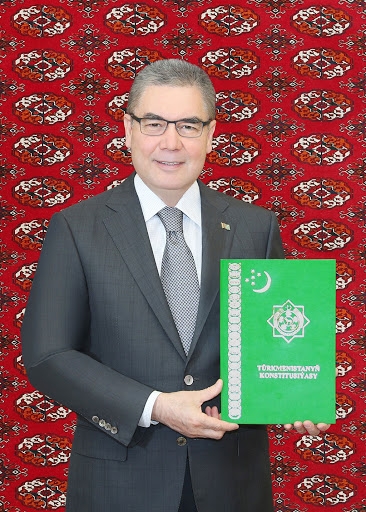 Turkmenistan has adopted changes to the constitution that will see the creation of an upper house of parliament and the scrapping of a consultative body called the Khalk Maslahaty, or People's Council.

The amendments were approved with dizzying rapidity on September 25 – first by the Khalk Maslahaty itself, then by parliament, and then by President Gurbanguly Berdymukhamedov. The Khalk Maslahaty will cease to exist in its current format, wherein around 2,500 people, including community elders and top officials, convened occasionally to promulgate policies of ostensible national importance.

TDH state news agency cited Berdymukhamedov as saying that approval of the amendments on the eve of celebrations for the 29th anniversary of independence, was a “magnificent historical event that will be inscribed in golden letters in the chronicles of our people.”

The new chamber will comprise 56 deputies with eight members apiece coming from the country’s five provinces and the capital, Ashgabat, and another eight being appointed directly by the president. The regional appointees will be elected in votes by members of their respective local representative bodies.

The responsibilities of the Senate, which is also to be known as the Khalk Maslahaty, will extend to invoking national referendums and considering candidates to head the Supreme Court, the office of the Prosecutor General, the Interior Ministry and the Justice Ministry.

Although tinkering with the constitution is being sold by state propaganda as an embrace of greater popular representation, the expanded legislature is unlikely to usher in any more democracy.

This appears, rather, to be a stage in a transition strategy. Berdymukhamedov, 63, has given no indication whatsoever that he intends to step aside any time soon, but he has seemingly been cultivating his son, Serdar, for high office at some future date. State media curiously chose to underline the president’s elder status in June by dwelling on the fact that he was celebrating reaching the age at which the Prophet Muhammad is believed to have died.

Tellingly, one of the Khalk Maslahaty’s competencies will include bestowing awards and military or other state titles upon the president. This raises the prospect of Turkmenistan following in the steps of Kazakhstan and Tajikistan in creating a bespoke, supra-presidential, lifetime office for Berdymukhamedov. In Kazakhstan, the Leader of the Nation role affords former President Nursultan Nazarbayev important sway over matters of national security. In 2015, lawmakers in Tajikistan voted to also designate President Emomali Rahmon with the title of “Founder of Peace and National Unity, Leader of the Nation,” thereby giving him lifetime privileges to decide major state policy, immaterial of whether or not he remains head of state. Berdymukhamedov is already known as Arkadag, or patron, but this title does not as yet carry specific institutional weight.

Attention will turn, when the new-look Khalk Maslahaty comes into being next year, to who is appointed as its speaker, as it will be this person that is constitutionally charged with taking over the country in the event of the president being unable to acquit his duties. That role is currently occupied by the speaker of the Mejlis, as the existing chamber of parliament is known.

The junior Berdymukhamedov is currently serving as Industry Minister. He took up that role in February, after leaving a previous post as governor of the Ahal province, which surrounds but does not include the city of Ashgabat. He was previously cycled through a number of other government posts. For most of 2018, he served as deputy Foreign Minister and represented Turkmenistan on multiple foreign trips in that capacity. Before that, he worked for some years as deputy head of the State Hydrocarbon Resources Management Agency. He has been a member of the Mejlis with the ruling Democratic Party since 2016.

The notion that Serdar is being primed for important office is also attested to by the efforts of state media to cast him in the guise of city-builder and champion of industry.

In his capacity as Ahal provincial governor, he oversaw the start to construction of a new provincial capital on the edge of Ashgabat that will span 950 hectares and house 70,000 people. Construction began in August 2019 and is slated for completion by next September – that latter date having been chosen, presumably, to coincide with the 30th anniversary of independence. More recently, he has been charged with diversifying the country’s economy away from reliance on energy exports.

While in the realm of speculation, there is also the future of Berdymukhamedov’s favorite grandchild to consider. Serdar occasionally appears alongside his father for state television stunts, but nowhere nearly as often as Kerimguly, who is Serdar’s son. The lumbering teen has regularly appeared in lengthy TV reports showing him composing and then performing songs with his grandfather. Other times, he has been seen joining Berdymukhamedov senior on long bike rides around the city.

Kerimguly is still far too young to occupy any top government jobs, but if his grandfather decides to stick around for another decade or so, it is a given that the option will be open to him.