Turkmenistan: Together in Electric Dreams

Instead of being transparent about the economic crisis, the president is, in the manner of an unaccountable manager incapable of long-term planning, trying to do the same with less. 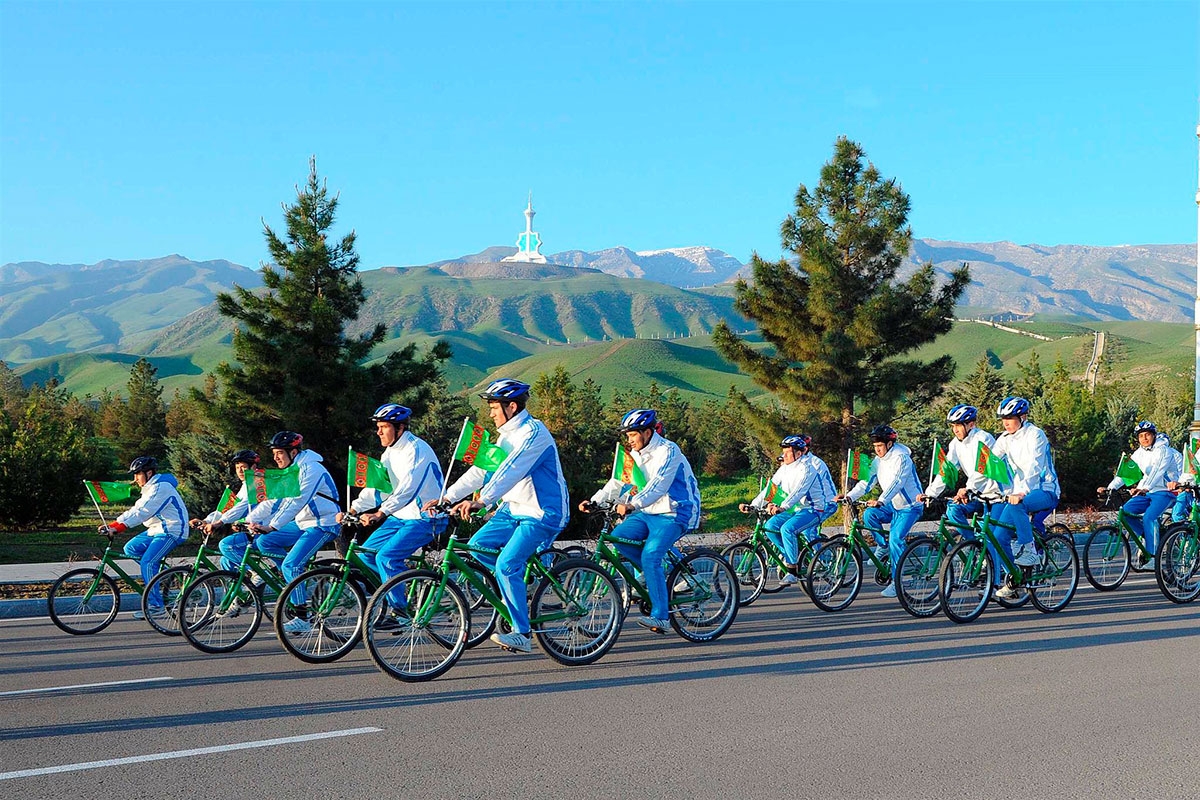 Desperate soccer fans around the world have in their hunger for the game turned to watching matches broadcast over the internet from Tajikistan, which insists it has not been visited by the coronavirus pandemic.

More succor is on the way. Turkmenistan will be resuming its own higher league tournament on April 19 following a brief hiatus.

This is all part of the business-as-usual coronavirus strategy being adopted by the government. Some of this is contingent on continuing to stem information about what is happening in the outside world. According to RFE/RL’s Turkmen service, Radio Azatlyk, the list of banned websites has grown to include those of the U.S. Centers for Disease Control and Prevention and the U.S. State Department.

Many news websites and social media platforms have long been inaccessible, although internet users equipped with censorship-circumventing VPNs can often outfox the authorities. Amsterdam-based news website Turkmen.news illustrated this fact by spotting that a state TV news report about an international scholarly conference being conducted over Zoom inadvertently revealed that Turkmen attendees from the Oguz Khan University of Engineering Technologies were only able to participate by using VPNs.

Azatlyk notes that the victims of the latest cycle of censorship all use the Amazon Web Services cloud platform, which means that the list of targets may not have been especially fine-tuned. But there is strong reason to suspect that Ashgabat is in a sulk with the United States.

USAID announced on April 6 that it was giving Turkmenistan more than $920,000 to help improve its healthcare system’s ability to detect and then handle any coronavirus outbreaks. It added by way of background that the United States has provided around $21 million worth of healthcare support to Turkmenistan over the past two decades.

Nothing too provocative there, one might have imagined, except that Turkmenistan bristles at the notion that it is in any need of charity. In a tart press release on April 7, the Foreign Ministry declared USAID’s claims to be untrue and said that cooperation between the two countries is “implemented on the basis of mutual benefit and equal partnership.”

Still, the government has moderated its stance slightly from its erstwhile blanket denialism. President Gurbanguly Berdymukhamedov has now made repeated allusions to the coronavirus. In a three-way, in-person meeting with Deputy Prime Minister Purli Agamyradov and Education Minister Mammetmyrat Geldiniyazov on April 8, he made the case that the coronavirus would be kept at bay – because there are purportedly no confirmed cases in Turkmenistan – by imparting the values of healthy living to young people. This could be done, he argued, by urging youth to do more sports.

This doctrine is seen in play during most evening news bulletins, which tend to conclude, even in these times, with a few minutes of footage of sportsmen wrestling or boxing, playing volleyball or football, or just going for a jog.

Nothing is further from the mind of Berdymukhamedov than the notion of cancelling mass events of the type that global health authorities have advised against until the coronavirus pandemic is brought under control. At a video conference with local officials on April 13, he heard assurances that preparations are still in place for festivities to celebrate “the occasion of the glorious 25th anniversary of the country's declaration of neutrality.” That event, at least, is slated for the end of the year, although the mass rehearsals will begin many months earlier. Turkmen Horse Day, meanwhile, is to be observed on April 26.

Last week’s bulletin concluded with the apparent news that a mass bicycle ride on April 7 had been cancelled in a seeming acknowledgement that some small gesture was needed to prevent the possible outbreak of a health emergency. It transpired later in the day, however, that the event had simply been reorganized because of bad weather. Berdymukhamedov, though, did not join the unwashed rabble outside and did his riding in the safe confines of an enclosed velodrome.

If anything, it looks like Berdymukhamedov is performing a reverse ferret and growing even more brazen and indifferent to the looming catastrophe. In an April 3 Cabinet meeting, he looked resigned to the need for belt-tightening and ordered a cut to the funding of construction projects, allowing an exemption only for “necessary social facilities.” But this week, he returned to talk of the need to modernize Ashgabat through the “construction of new facilities.” He likewise urged the creation of more public parks and insisted that particular attention be paid to their aesthetic and ecological characteristics. On April 9, Berdymukhamedov took a spin around Ashgabat to inspect ongoing works, which include new premises for the rubber-stamp parliament, a congress hall and a “fashionable hotel.”

Efficiencies are being found elsewhere. Vienna-based Chronicles of Turkmenistan reported on April 13 that employees of Ashgabat’s central heating system utility company, Ashgabatteplo, have been informed that their salaries are to be reduced by 30 percent. Instead of acknowledging the crisis or being transparent about it, Berdymukhamedov is, in the manner of any unaccountable manager incapable of proper long-term planning, trying to do the same with less.

Another cost-cutting wheeze is to increasingly switch state media from paper to electronic formats, something that is also sold by the state as a modernization effort. But Berdymukhamedov has another line of argument in support of his digitization drive. Namely, as he said last month, in a direct reference to the unfolding COVID-19 pandemic, the fact that “viruses can be transmitted through paper media,” which is why it is “important to switch to remote electronic communications and services as soon as possible.”

The urge toward digitization is also affecting the use of cash, supposedly. Berdymukhamedov noted with satisfaction at the April 10 Cabinet meeting that there is less hard cash in circulation, a fact that he attributed the increased introduction of non-cash payment systems.

Bank customers have seen this first-hand as ATMs routinely run out of cash or cease working altogether. Chronicles reported that on April 11, in what appears like an immediate outcome of the Cabinet meeting, that customers at state-run Turkmenistanbank were unable to withdraw more than 200 manat ($57 at the official rate, but closer to $10 on the black market) from ATMs, down from 800 manat previously. That had dropped to 100 manat one day later. This withdrawal has reportedly been imposed across other banks too.

Bank cards are all very well, but as Azatlyk reported earlier this month, some state retailers and bazaars have refused to accept payment with cards issued by the State Bank for Foreign Economic Affairs, better known as Turkmenvnesheconombank.

The dynamics behind all this have little to do with digitization though. In reflection of a probable contraction of foreign currency reserves, the Central Bank at the start of the month reportedly ordered banks to stop paying recipients of dollar salaries, usually employees at foreign companies, in U.S. currency. After this, the black-market rate for the manat surged from 20 against the dollar to 22. But since Turkmens cannot leave the country anyway, on account of coronavirus-related travel restrictions, demand for the dollar is depressed – a fact that has now pushed the manat back closer to 20.5-21 against the greenback.