Turkmenistan sees Japan as an important source of technical know-how and investment, and the enthusiasm is mutual. Our weekly briefing. 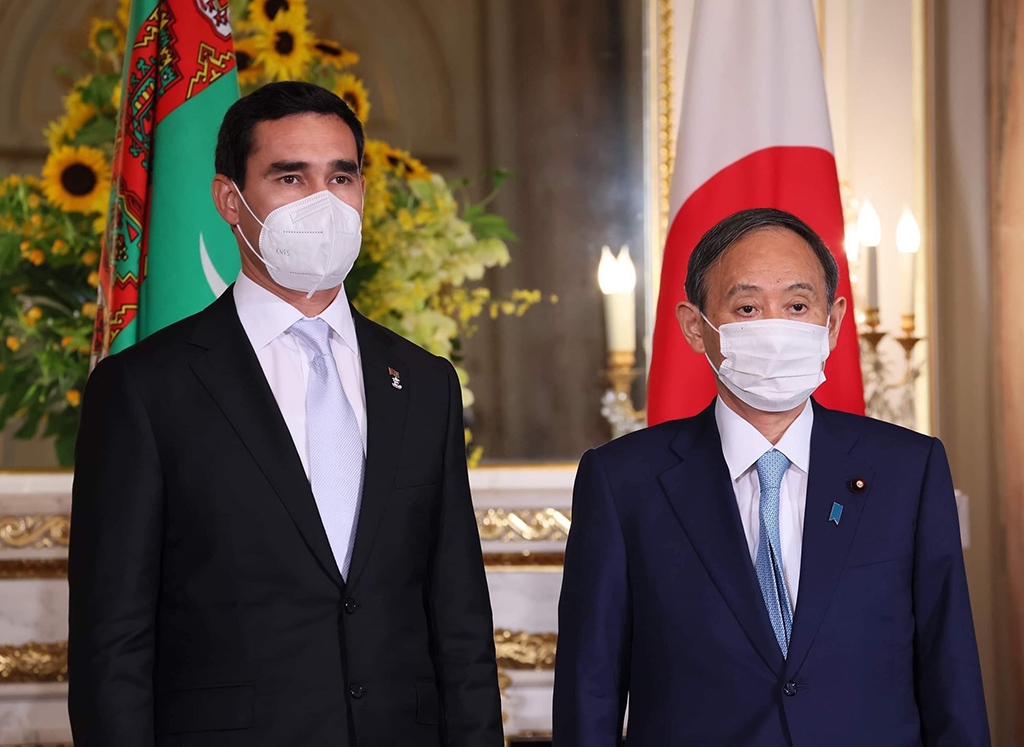 Turkmenistan’s Olympic squad has been led to the Games in Tokyo by the president’s son, Deputy Prime Minister Serdar Berdymukhamedov.

There is nothing about the presumed heir’s job profile that makes him a natural candidate for the task, other than that he is increasingly representing Ashgabat on foreign shores.

Sure enough, Berdymukhamedov junior even managed to secure one-on-ones with Emperor Naruhito on July 23 and Japanese Prime Minister Yoshihide Suga on July 24. Judging by the Turkmen Foreign Ministry readout, the exchanges were perfunctory in the extreme, confined to boilerplate language about cooperation in trade, investment and culture.

This is not all about getting photo-ops for Serdar, though. Turkmenistan sees Japan as an important source of technical know-how and investment, and the enthusiasm is legitimately mutual.

Ashgabat cites several projects as indicators of the kind of thing it believes is possible in future.

There is the ammonia and urea fertilizer plant built in Mary on a turnkey basis by the Sojitz Corporation and Kawasaki Heavy Industries in 2014.

A $3.4 billion plant producing polyethylene and polypropylene, materials used to make plastic and packaging, opened in the village of Kiyanly in 2018 after the completion of building work by Japan’s TOYO Engineering Corporation, along with Korea’s LG International Corp and, nominally, the Turkmen state chemicals company. This facility is particularly important in that it is designed to absorb 5 billion cubic meters of Turkmenistan’s natural gas and turn out 4.5 billion cubic meters of “marketable gas,” in addition to all the supplementary products.

That same year saw the inauguration of the Garabogaz plant, in western Turkmenistan, for the conversion of natural gas into urea fertilizers. The work was done by Mitsubishi Corporation and Turkey’s Gap Inşaat, and was funded with almost $700 million worth of credit from the Japan Bank for International Cooperation.

And finally, there is the $1.7 billion natural gas-to-gasoline complex near Ashgabat that was put into operation in June 2019. That was jointly built by Kawasaki Heavy Industries and Turkey’s Renaissance Construction.

Turkmenistan’s fantasy is that these kinds of technologically advanced plants should be completed one day, for the keys to be handed over the following day, and that they begin raking in profits soon after. Experience has shown this to be a delusion, however, and that is partly why continued dialogue with Japan remains important beyond the expectation that it might generate an investment windfall.

In January 2020, state-owned gas monopoly Turkmengaz got approval to conclude a consultancy deal with Kawasaki Heavy Industries to help run the freshly minted natural gas-to-gasoline complex after what appears to have been a very slow start to operations. In another recent development that all is not well at these Japanese-built projects, management of that facility and the Kiyanly polyethylene and polypropylene plant were earlier this month transferred out of the hands of Turkmengaz into those of state chemicals company Turkmenkhimiya.

President Gurbanguly Berdymukhamedov attributed this decision to a desire to see “stable operations at these plants” and to relieve Turkmengaz from having to “solve problems not in its remit.” Turkmengaz was probably not unhappy about having the projects under its wing when it looked like they might generate profit, but it will now be relieved to cut loose what are almost certainly loss-making affairs.

This is no trifling matter for the ruling elite, going by a searing report published earlier this year by Amsterdam-based Turkmen.news, which memorably described Turkmenistan’s oil and gas sector as “the president’s cash cow.”

“Turkmengaz, [oil company] Turkmennebit and especially the Turkmenbashi oil refinery complex are the most profitable Turkmenistan state enterprises at present. One order from the president and they are obliged to pay for his every whim out of their own funds,” one insider source told the website.

Serdar Berdymukhamedov has already returned home from Japan alas, thereby missing out on the historic achievement recorded by a member of his country’s Olympic team: winning a medal. Turkmenistan had until now been the only remaining former Soviet republic to fail to ever win any kind of medal in either the Summer or Winter Games. That changed on July 27, when Ashgabat-born Polina Guryeva secured silver in the women’s 59-kilogram weightlifting category. This breakthrough is going to spark jubilation back home.

Turkmenistan may usually be a failure in the sports arena, but it will always be at or near the top of global rankings of repressive governments.

It has consolidated its claim to that reputation with another ugly incident in mid-July, when police arrested a doctor who had had the temerity to speak out against her unjust dismissal. As Human Rights Watch reported on July 20, Khursanai Ismatullaeva has for years been seeking redress for being fired from her job at a neonatal clinic in Ashgabat in 2017.

But why would Turkmen police choose this moment to arrest Ismatullaeva? Because, it seems, she spoke about her story at an event organized by members of the European Parliament on July 15, thereby bringing shame upon her nation. The reprisal was swift, as a group of MEPs explained in a letter describing their alarm at the situation.

“The next day, 16 July, Dr. Ismatullaeva was arrested by several men in police uniform and several in plainclothes, who took her in unknown direction. Her electronic devices were also seized. Family of Dr. Ismatullaeva has no information about her whereabouts and is not sure what charge, if any, could be laid against her,” the letter stated.

Another person facing an uncertain stretch of time in prison is civic activist Murat Dushemov, who had been due for release at the start of July after serving a 15-day jail term after a run-in with law enforcement authorities denying him the right to leave Ashgabat. Dushemov is still behind bars, however, raising fears among his colleagues that the authorities may pursue a tougher sentence following a scuffle they say was instigated in the activist’s cell by suspected government plants.