That Central Asia's presidents seemed to enjoy themselves together was itself a breakthrough. This and more in our weekly Turkmenistan briefing. 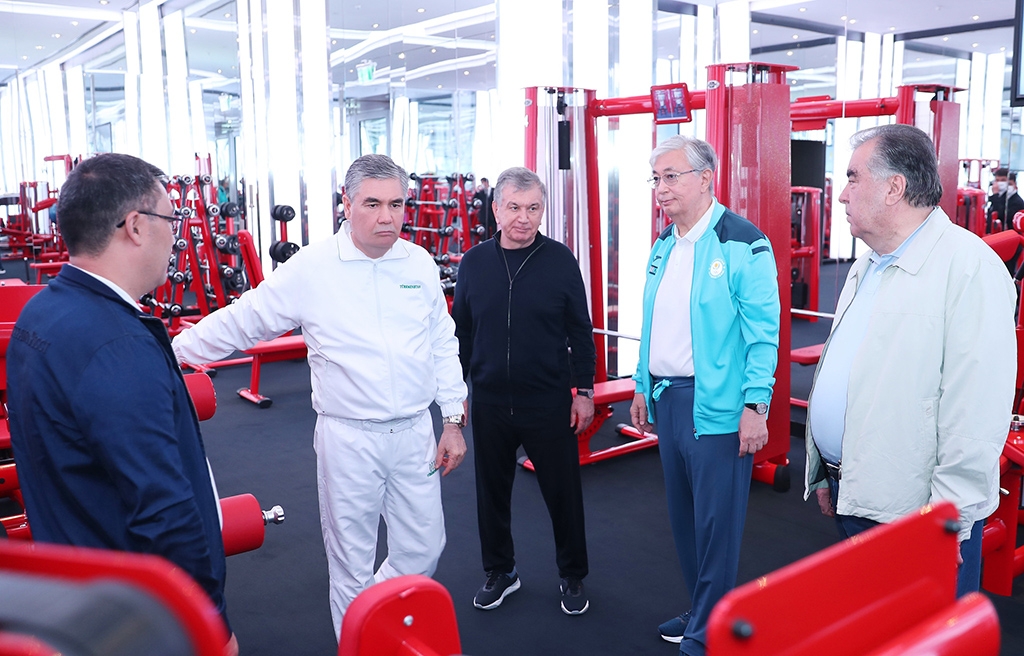 If nothing else, the Central Asian leaders’ summit in the Caspian seaside resort town of Awaza generated many amusing moments of presidents awkwardly posing together for photos.

There is a wealth of images to pick from since each leader had their own photographer on-hand to capture the magic. The visit to the gym. The somber looking at bread. Kyrgyzstan’s president appearing locked out of the fun (these were captured by the Tajik delegation – a possibly telling detail given the sour state of Kyrgyz-Tajik ties).

The consultative meeting that wrapped up on August 6 may not have produced concrete outcomes, but it was never meant to. In this instance, the bromides about historical bonds, mutual respect, and cultural and civilizational proximity were the entire point. For decades, Central Asian presidents did not tend to convene unless it was under the auspices of a broader regional gathering – usually one steered by Russia. The event in Awaza was the third of its type to take place since 2018. And notwithstanding the snark about photos above, some of the presidents legitimately gave the impression of enjoying one another’s company – most of the time. 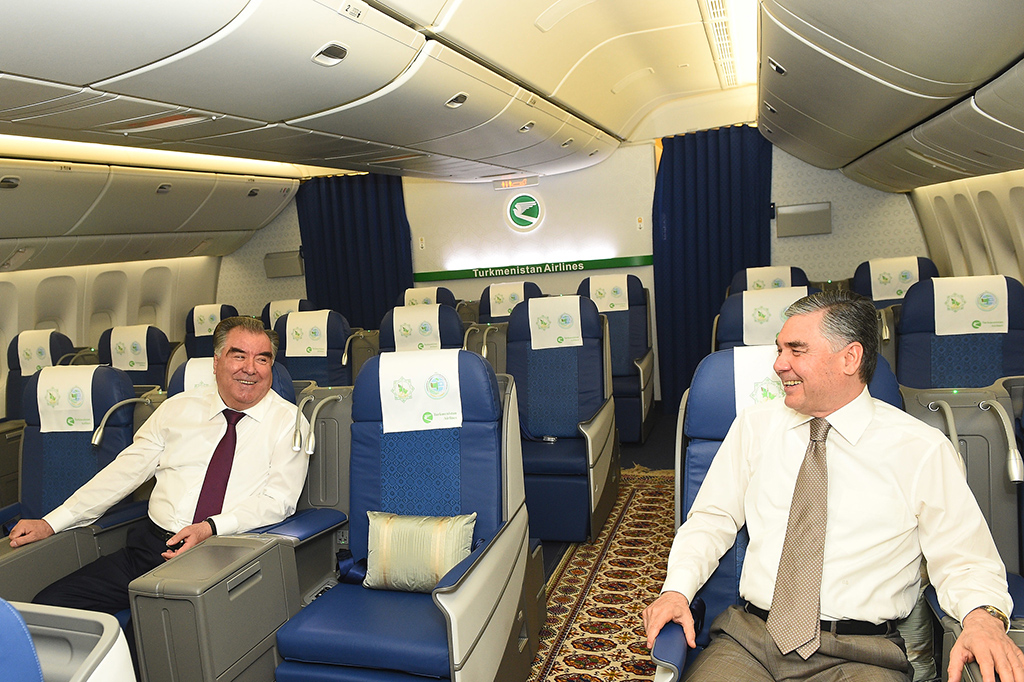 As RFE/RL’s Bruce Pannier noted in his write-up of the meeting, however, the specter of Afghanistan and COVID-19 hung heavily in the background.

Even the host president, Gurbanguly Berdymukhamedov was unable to avoid the ominous signals coming from his nation’s neighbor to the southeast.

“The period that has elapsed since we held the last five-way summit has been trying for regional stability. […] There are conflict situations in a number of regions located not far from the borders of Central Asian countries,” he told his colleagues. “In these circumstances, it is incumbent on us to display responsibility and thoughtfulness. As fraternal states and peoples, we must through all means strengthen peace, good-neighborliness and mutual understanding so that our common home – Central Asia – may remain strong and stable.”

On a more positive note, considerable energy was devoted to thinking about increasing trade flows. Kyrgyz President Sadyr Japarov proposed creating a five-nation intergovernmental commission, to be composed of deputy heads of government, to pursue that end.

In his briefing to journalists, Turkmen Foreign Minister Rashid Meredov singled out dialogue on transport as a particularly consequential area: “A proposal was made for a five-sided working group […] to study options for creating new transport and communication routes along the following lines: Central Asia-Caspian and Black Sea region, with access to southern Europe, as well as Central Asia-Middle East.”

The section of the joint declaration that touches on transportation links goes as far as hypothesizing the creation of “regional value chains and joint industrial clusters,” which implies remarkably ambitious visions of teamwork.

Turkmenistan has signaled in firm terms how it sees itself getting that ball rolling. As Meredov told reporters, Ashgabat stands poised to “significantly increase” the amount of natural gas and electricity it sends to the region. The seeds of this concept were sown in June, when Japarov came away from a visit to Ashgabat with a deal for Turkmenistan to supply Kyrgyzstan with an unspecified amount of natural gas and electricity in the fall and winter.

Tajik leader Emomali Rahmon will have gratified his host no end by raising the subject of the Turkmenbashi seaport on the Caspian. The $1.5 billion port opened in May 2018 to much fanfare, but little certainty about who would use it. Turkmenistan is a hard country for cargo companies to deal with and the coronavirus pandemic has only complicated matters. Rahmon said, though, that he believed that Turkmenbashi could serve as a node for getting Tajik goods into foreign markets.

The Awaza confab was supposed to be quickly followed by another three-way summit on the Caspian between the leaders of Azerbaijan, Turkey and Turkmenistan. Alas, this planned encounter was scrapped at the last minute at the request of Ankara, which explained that Turkish President Recep Tayyip Erdogan will be otherwise engaged tackling the forest fires emergency ravaging his country.

Before the Awaza event, there was some unpleasantness back at home. At a meeting with security officials on August 3, Berdymukhamedov was compelled to issue a severe reprimand and final warning to deputy Defense Minister Shirmat Babanazarov. The official bulletin was typically ungenerous with details, attributing this dressing-down merely to the president’s dissatisfaction with the standard of the official’s work.

This may or may not have been precipitated by the vehicle accident in July that led to the death of at least 18 servicemen. Amsterdam-based Turkmen.news has reported that the personnel carrier involved overturned on a road outside the capital, Ashgabat, while the troops were being transported to a rehearsal parade in preparation for celebrations to mark the country’s 30th anniversary of independence. Turkmen.news also noted with some disapproval, meanwhile, that Defense Minister Begench Gundogdyev appears to have ducked all responsibility for this tragedy.

Germany will have generated some irritation in Turkmenistan this week by classifying the country as high-risk for COVID-19. Ashgabat continues to pretend that it has not detected a single case of the coronavirus, but health officials in Berlin beg to differ. “It can be assumed that the number of unreported cases is high,” Germany’s Foreign Ministry concluded. “The health system is overloaded.” The warning is doubtless well-founded although largely useless, since barely anybody can get into Turkmenistan anyway.

In any case, Berdymukhamedov eschews transparency and solid public information as methods for keeping the population healthy. Instead, he prefers to personally display the benefits of keep-fit exercises.

State television on August 7, on the eve of the closing ceremony of the Tokyo Olympics, led its bulletin with a report on Berdymukhamedov and his son and presumed heir, Serdar, visiting the gym. First the pair did some light weightlifting. A positively murderous-looking Serdar performed one set on a gym contraption as his father stood over him and offered almost certainly unsolicited tips. Later, father and son wound down on the basketball court and the bowling alley. State television footage implied that the men are highly competent practitioners of both sports.

The purpose of all this was to remind the public again about the virtues of sport, a point also underlined in the Neutral Turkmenistan daily’s report on this outing: “Everyday practice shows how physical exercise and sport inspire and improve the quality of a person's life and bolster their health.”

And yet, neither the newspaper nor state TV found time to remind the public of the inspirational achievements of Ashgabat-born Polina Guryeva, who made history on July 27 by winning silver in the women’s 59-kilogram weightlifting category, thereby becoming the first Turkmen national to get onto an Olympics medal table. Neutral Turkmenistan engaged in a brief burst of euphoria at the time, but Guryeva has sunk back into total obscurity as far as state media is concerned. And as of August 10, Berdymukhamedov had yet to acknowledge the feat at all.

There is only room for one champion in Turkmenistan.