Amid a food crisis, the president says food imports should be stopped. This and more in our weekly Turkmenistan briefing. 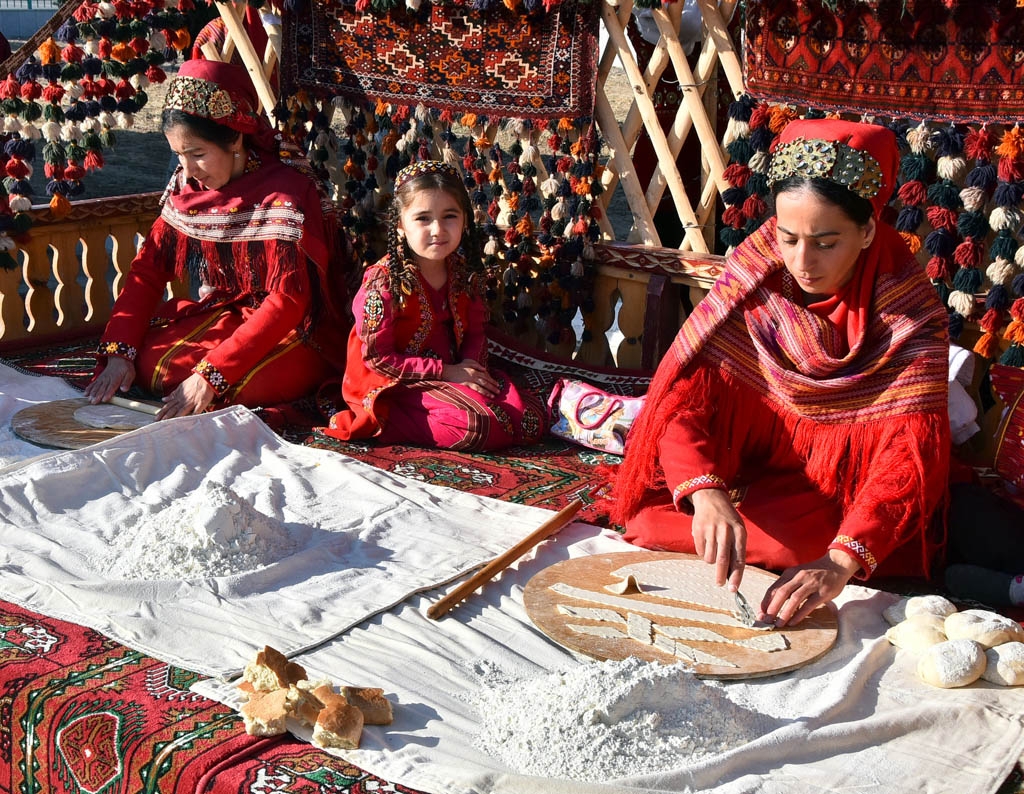 Turkmenistan’s new president has launched a fresh war on women and how they look. (government handout)

In the least surprising news to come out of Turkmenistan in years, it looks likely that a city is to be named after former President Gurbanguly Berdymukhamedov.

The city in question, according to the sources of RFE/RL’s Turkmen service, Radio Azatlyk, is the one that is being built from scratch to become the capital of Berdymukhamedov’s native Ahal province.

That this might come to pass was semaphored in late April, when Berdymukhamedov’s son, the current president, Serdar, announced at a government meeting that the naming of the future city would be put up for “nationwide discussion.” Under the Berdymukhamedov regime, allusions to popular mandates are always a feeble attempt to give decisions the hollow imprimatur of democratic legitimacy. The city will as a result inevitably be named Arkadag, the patron protector, the personality cult honorific bestowed on the former leader.

Berdymukhamedov the elder may have ceased to be the president in March, after he which he took a holiday granted to him by his son, but now he has returned to do some back-seat driving.

On May 5, ostensibly in his capacity of speaker of the Senate, he traveled to the vanity tourist resort town of Awaza to inspect preparations for summer. He then went a little further up the Caspian coast to the city of Turkmenbashi, named in honor of the country’s first megalomaniacal dictator, to check on a hospital opened only weeks ago by his son. The optics of this inspection look unfortunate for Serdar Berdymukhamedov, since it feels like he will always have his father looking over his shoulder.

Then again, Berdymukhamedov the elder may have other preoccupations. He performed his hospital visit in his guise as founder of the Gurbanguly Berdymukhamedov Charitable Foundation for Needy Children. The precedent of Kazakhstan neatly demonstrates how such charities, removed as they are from any kind of scrutiny (not that there is any of that in Turkmenistan anyway), are ideal places to camouflage ill-gotten gains. The ex-president will be so busy with his charitable activities, in fact, that he has left the job of attending Cabinet meetings to his deputy, Kasymguly Babayev.

While at least one notable is being left alone to purloin in peace, the authorities are going hard after other allegedly corrupt officials. On May 6, Prosecutor General Batyr Atdayev reported that a group of officials in the Trade and Foreign Economic Relations Ministry were caught making money off state food subsidization programs. The perpetrators appropriated flour, vegetable oil and poultry meat that was supposed to be sold at affordable prices to the public and made large profits, Atdayev said. Bazaar directors, warehouse managers, freight forwarders and regular laborers were also involved in this conspiracy, he said. At least 13 purported offenders were named.

“Nobody has the right to steal the property of the people, the state, and to earn money through dishonest labor,” President Serdar Berdymukhamedov fumed in response to this report.

There could naturally be no thought of an open and public trial. The offenders have already been sentenced to prison terms of between eight and 20 years, state media reported.

Heaping the blame for the lack of affordable groceries on a group of a shifty government operators suits the government, of course, since they can now ascribe chronic shortages not to their own ineptitude but the greed of a limited circle of officials and managers. Which is not to say the problem didn’t exist. Vienna-based Chronicles of Turkmenistan provided a useful list of previously reported cases of basic staples being sold under the table to private retailers and subsidized food mysteriously disappearing from warehouses.

Berdymukhamedov is fighting the food question on two fronts. On May 6, he also delivered a stern reprimand and “last warning” to Chary Gylydzhov, the deputy prime minister with the portfolio for the retail sector, for failing to reduce the volume of imported food items like potatoes, onions, garlic, fruit, flour and oil.

“Work should be stepped up to increase the production of Turkmen consumer goods and reduce the volume of imported groceries," the president said, adding ominously that it was down to Gylydzhov that the illegal re-sale of food, vegetable oil in particular, was not being adequately tackled.

Gylydzhov has long been an eye-catching character for his particularly eager brown-nosing for Berdymukhamedov the elder, but will he survive the regime of the son?

The president was handing out reprimands with abandon this past week. At a government video conference meeting on May 3, he chided the governors of the Ahal, Dashoguz and Mary provinces, all for shortcomings in failing to somehow properly implement the state’s agricultural agenda. Dashoguz governor Nazarmyrat Nazarmyradov was singled out for shortcomings in the rice cultivation program, which sounds ominous given that Berdymukhamedov doesn’t want to hear about food imports.

While like his father in so many ways, it appears that Berdymukhamedov the younger is exploring novel ways to make his subjects’ lives even more miserable and austere. Growing international attention is being paid to the government’s perplexing fresh war on women. RFE/RL reported again at length this week on how women are being prevented from wearing clothes deemed to be tight-fitting or using accessories such as false nails or eyelashes.

“Still further bans have been made on women having cosmetic surgery, such as breast enhancement, lip fillers, or even eyebrow microblading, which is popular with many young women in Turkmenistan,” RFE/RL’s Farangis Najibullah reported in a piece published on May 4.

Berdymukhamedov is demonstrating his performative turn to chastity and religiousness in other ways too. At the May 3 government meeting he instructed the governors of all five of the country’s provinces to build one new mosque apiece. This, he said, was being done in response to widespread public calls to do so.

As Amsterdam-based Turkmen.news argued in a commentary on May 4, though, this should not be read as indicative of genuine, heartful piety. It is instead all about control. In a persuasive argument of the regime’s actual contempt for the canons of Islam, Turkmen.news noted how clerics were required to mark the closing of the holy month of Ramadan by reading extracts in the mosque from the latest written work of Berdymukhamedov the elder. The book, pompously titled “The Meaning of Life,” is a cod-moralistic primer in the vein of the Rukhnama, written by the late President Saparmurat Niyazov.

“According to [Islamic] canons, [clerics] should have read from the Koran. It should be assumed that in truth neither the author of the book nor his son-president can in any way be considered religious people,” the author of the Turkmen.news article wrote. “Otherwise, they would be afraid of God's punishment for such a brazen equivalence between their own creation and that of a sacred text.”

On May 4, Berdymukhamedov received a visit from the European Union’s special representative for Central Asia, Terhi Hakala, to talk about, well, it isn’t exactly clear what. Hakala tweeted on May 9, a full five days after the visit occurred, that she had had “discussions with the top leadership, government members, civil society actors, media and other partners.” Because the EU can vie with the Turkmen government on opacity any day of the week, no information is provided as to what those discussions entailed or who those various interlocutors might have been. A Turkmen Foreign Ministry statement noted only that Ashgabat and Brussels are ready to “search for effective forms and new areas of partnership,” and intensify cooperation in the “political, economic, humanitarian and environmental spheres.”

If anything of any practical use regarding, say, the export of Turkmen gas to Europe came up in conversation, it is not for the public to know.