The presidential election on March 12 will see the current leader's son ushered into office. 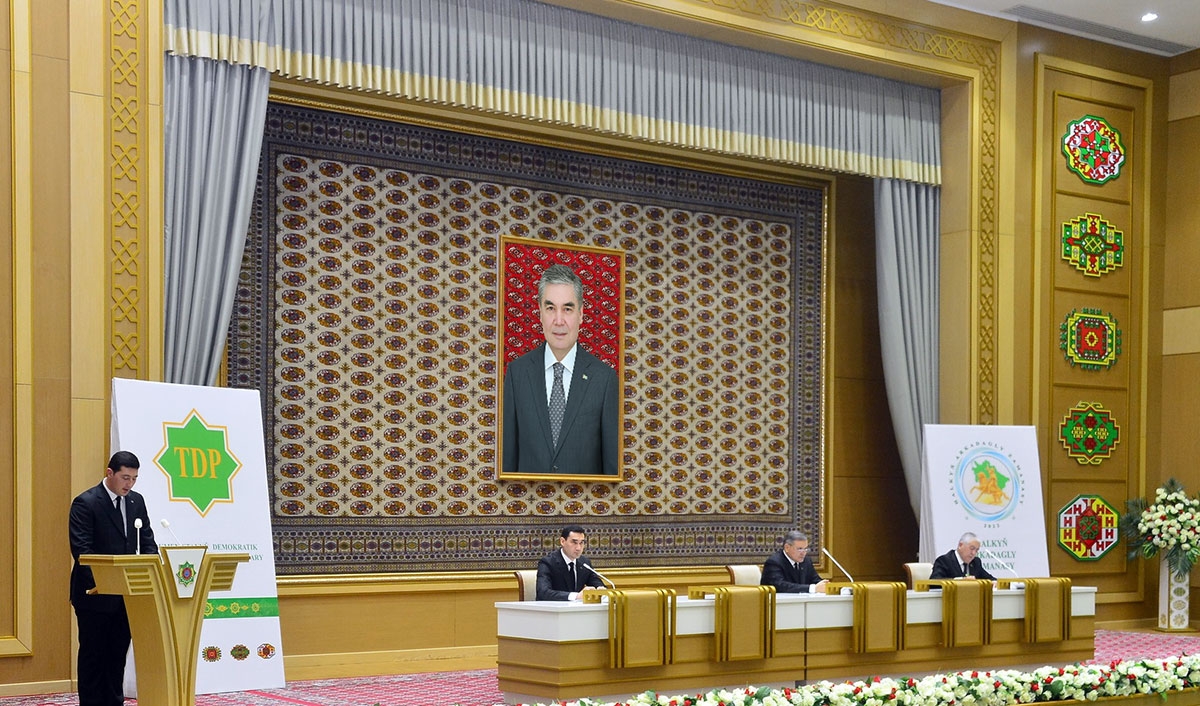 Turkmenistan will have a new president next month. But he will still be a Berdymukhamedov.

The trigger was finally pulled on the transition mechanism at an extraordinary session of the Khalk Maslahaty (People’s Council) on February 11, when President Gurbanguly Berdymukhamedov, 64, announced in typically self-aggrandizing and circumlocutory manner that he was stepping down.

“As you know, two years ago I reached the age of the Prophet Muhammad,” he said. “Today, I want to talk to you about the difficult decision that I have made. I support the idea of young leaders who have been brought up in a spiritual environment and in accordance with the demanding needs of our time being given an opportunity to lead the country.”

This should have set the stage for a two-year wait. Berdymukhamedov was reelected to a seven-year term in 2017. At his urging, however, parliament decreed that a snap election should take place on March 12.

With that business done, only one task remained. On February 14, the date marking the official start to the election campaign, a gathering of members of the Democratic Party – nominally the ruling party, although this distinction means nothing in Turkmenistan – voted unanimously to nominate Serdar Berdymukhamedov, the president’s 40-year-old son, as their candidate. The business of green-lighting the nomination, which was performed in a markedly lugubrious mood, was given second-billing in the evening news.

In real democracies, a jubilant nomination recipient and certain election winner would expect to have some of their acceptance speech to the celebrating party congress broadcast on television. But here, a resolutely stone-faced Serdar Berdymukhamedov delivered his remarks to an audience with its eyes cast down to their notebooks. His voice was not heard once in the television report. The state broadcaster opted instead to have an announcer relay the entire substance of the congress.

For anybody seeking guidance on what is to come, Berdymukhamedov junior signaled that continuity will be the byword. As president, he will stick to “the spiritual principles and heritage of his ancestors,” he said, although he did forecast that 2022 would go down as “a year of rapid socio-economic development.”

“I have a firm belief that our people, with their superior and unshakable spirit, will come together and work to further transform our motherland and strengthen their faith in the President-Arkadag for a bright and happy future,” Serdar Berdymukhamedov said, utilizing the honorific title coined for his father.

Vienna-based outlet Chronicles of Turkmenistan offered some insight into what those imminent socio-economic developments might constitute. Correspondents for the website reported on February 10 on how prices for subsidized food items at state-owned stores are steadily creeping upward. Loaves of the cheapest type of bread sell at 0.70 manat ($0.20 at the official rate and $0.03 at the black market rate), but quickly run out. Supplies of the less affordable 2.5 manat bread are more reliable, however. RFE/RL’s Turkmen service reported on February 9 that bread shortages at one Ashgabat bazaar sparked voluble anger and led to somebody smashing a store window.

As Chronicles has reported previously, prices for other subsidized staple goods saw a rise in the last quarter of 2021. Sugar went up from 10 manat per kilogram to 18 manat, and cooking oil went from 18 manat per liter to 35 manat.

No other candidates for the presidential election have yet been nominated, but state media was reassuring on this front. “The names of other contenders for this high state position will soon become known, which is clear evidence of the available choice at the upcoming presidential elections,” the state news agency noted in a report.

What, then, is Berdymukhamedov senior now expected to do? He is set to retain an important formal role in his capacity as a speaker of the Senate, which looks like an insurance policy of sorts. The Senate leader is the second-ranking figure in the hierarchy and assumes the presidency in the event of the incumbent being unable to execute the services of his office for any reason. The outgoing president is also chair of the State Security Council and the supreme commander-in-chief of the armed forces. How those responsibilities will be doled out in practice once Serdar is president is yet to be fully clarified. In neighboring Kazakhstan, former president Nursultan Nazarbayev retained a strong degree of formal control over the security bloc even after his resignation in 2019 – a similar formula may be adopted in Turkmenistan.

There was also a sense that the Khalk Maslahaty was intended as an approval session for a script from which Serdar will be expected to faithfully recite his lines. In addition to dealing with the succession business, the council adopted a so-called “National Program for the Socio-Economic Development of Turkmenistan in 2022-2052.”

The underlying principles of this document are, given the long timeframe, predictably vague. The basic thrust is more of the same agenda that President Berdymukhamedov has been talking about, although only spottily implementing, over the last few years: the economy must be diversified, processing industries will be provided state assistance, thereby boosting Turkmenistan’s export potential, tax and budgetary policies will be rationalized, and so on and so forth.

Berdymukhamedov is leaving office with the nominal bequeath of a large capital investment program. At the February 11 government meeting, Berdymukhamedov approved the spending of 40 billion manat ($11.4 billion at the official exchange rate; $2 billion at the black market rate) on the construction and refurbishment of industrial plants and factories, hospitals, homes, schools, cultural centers, and government buildings in 2022.

As is now customary, Berdymukhamedov said that “all sources of financing” will be used to underwrite that investment agenda. This means that rather than the money coming exclusively out of state coffers, as was historically the case, an unspecified amount will be doled out through directed lending, a practice discouraged by the International Monetary Fund.

The IMF is too coy to spell it out, but one reason it is so squeamish about cheap credit is that the money invariably ends up on the accounts of ruling family members and cronies. One project Berdymukhamedov highlighted last week was the Turkmenabat-Ashgabat-Turkmenbashi highway currently under construction. A leading contractor on that project is the president’s brother-in-law.