Flights to Europe set to resume as Ashgabat flirts with its neighbors, but the economic masochism continues.

Akhal-Teke: A Turkmenistan Bulletin May 7, 2019 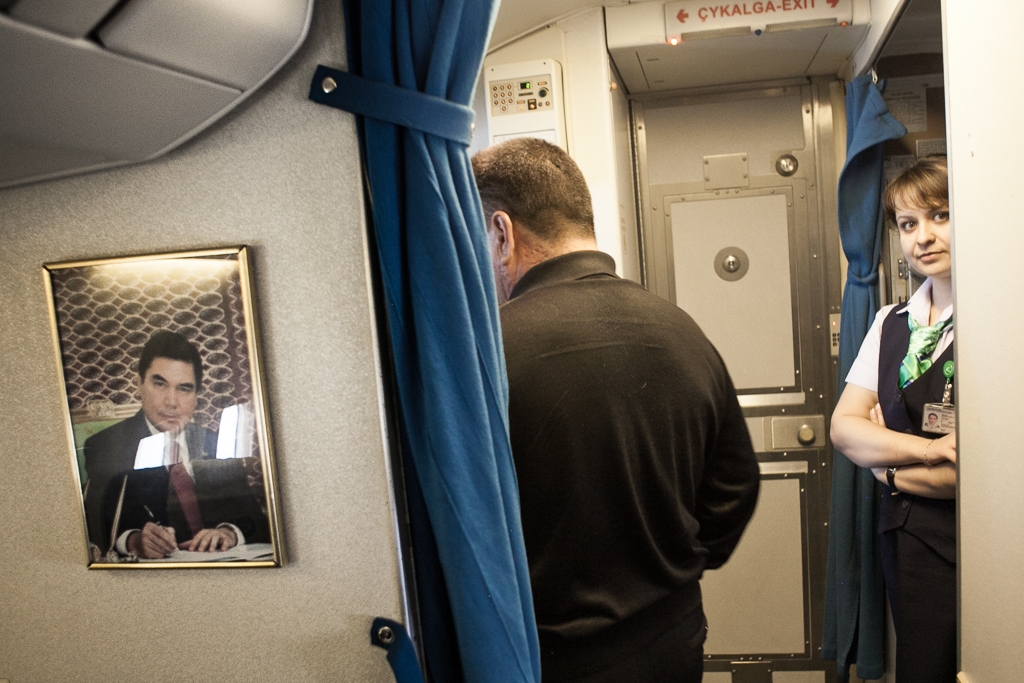 “The Protector” returns to Europe. (Eurasianet)

On May 1 Turkmenistan Airlines, whose cabins are festooned with the president’s picture, published a new timetable including flights to Birmingham, Frankfurt, and London from the beginning of June.

The airline had been barred since February from European airspace over safety concerns. Turkmenistan is known to have hired consultants from Lufthansa to bring the airliner back into compliance. Turkmen media also revealed this week that 25 of the airline’s employees had undergone additional training in Moscow, though officials have been mum on the whole affair.

The airliner is not past its troubles: the Ashgabat-Paris route cancelled last December allegedly over unpaid debts to Charles de Gaulle Airport has not been reinstated. And now passengers can be expected to shell out twice as much for an international ticket, reports the exiled Chronicles of Turkmenistan.

Turkmens concerned with transportation options closer to home are experiencing a shortage of Chinese-made motorcycles and spare parts. This impacts another economic mainstay: Prices for donkeys, an established conveyance on Turkmen farms, have increased three times, the Chronicles reported on May 6.

Of course, nothing is more critical to the Turkmen economy than gas. And this week saw yet more talk on that front.

The head of the European Union Delegation to Azerbaijan, Kestutis Jankauskas, floated the idea of Turkmen gas being sent to Europe through the Southern Gas Corridor, which presently supplies gas from Azerbaijan to the EU via Georgia and Turkey, in an interview with Azerbaijan’s Trend news agency. Ashgabat quickly trumpeted the comments. But EU official regularly hint at such a possibility, which would require a pipeline across the Caspian Sea – and their previous declarations have come to naught.

Still, the talk, and the efforts to get Turkmenistan Airlines back into Europe, appears part of a growing trend, where Ashgabat is mending relations with its neighbors and regional powers.

Perhaps most significant in that department is the resumption of gas sales to Russia last month.

New data from KazTransGas, Kazakhstan's national pipeline operator, reveals that Turkmenistan is sending Russia about 15 million cubic meters of gas per day. Turkmenistan has no other route to Russia, so this data appears to be all-inclusive. These deliveries amount to only a fraction of what Moscow has bought in the past. In the halcyon days of 2008, by comparison, Russia was importing 90 billion cubic meters (bcm) from Turkmenistan per year; the new figure is closer to 5.5 bcm.

While the value of this trade is unknown, one report put the price at $110 per 1,000 cubic meters. That would make the current deliveries worth just $1,650,000 per day at present. Nevertheless, the two sides have agreed to talk more. On May 2, Berdymukhamedov approved a new Russian-Turkmen intergovernmental commission on economic cooperation. In related trade news, which may help ease hunger pains as flour quotas continue to tighten, the Agriculture Ministry in Russia’s Stavropol region announced that it is expecting to sign a contract with Turkmenistan in May for the delivery of 10,000 tons of winter wheat seeds.

A delegation from the U.S. State Department visited Ashgabat on May 2 to review the results of last year’s annual bilateral consultations. While few details were forthcoming, the U.S. Embassy did announce that Afghanistan was discussed. Washington is keen for peace talks to end decades of war across the border, but clashes between American-backed Afghan forces and the Taliban continued in Badghis province, which abuts Turkmenistan, last week.

The relations along the Uzbek border – never warm – is far better, and apparently improving. A Turkmen delegation traveled to Urgench to work with its Uzbek counterparts on May 6 on demarcating the frontier. Earlier in the week representatives of Uzbekistan's Federation of Trade Unions visited Ashgabat. Ashgabat also organized a roundtable in Tashkent to discuss the upcoming Caspian Economic Forum it will host in Avaza this August. Amid these increasingly frequent bilateral meetings, Turkmenistan's Ambassador to Uzbekistan, Yazguli Mammedov, said that "the ground was set for continued development of interregional cooperation."

While this all suggests some new affection in Ashgabat for friendship abroad, Berdymukhamedov poured cold water on the idea that anything is shifting, telling his Cabinet on May 2 that “the foreign policy of our neutral state remains unchanged.”

During the same meeting, Berdymukhamedov doubled-down on his fondness for import-substitution. The International Monetary Fund specifically warned against continuing this effort just last month: “Phasing out import-substitution policies would make exports more competitive and help diversify the economy.”

Berdymukhamedov is fond of foreign technology. This week he led his National Security Council out into the desert on quad motorbikes for a meeting. The Vienna-based editors at Chronicles of Turkmenistan republished a state television video with a unique soundtrack of their own choosing – demonstrating the kinds of freedom a Turkmen journalist can only enjoy in exile.

May 3 was World Press Freedom Day. The Cotton Campaign, an NGO that campaigns against the use of forced labor in Central Asian cotton harvests, used the occasion to call for the release of Gaspar Matalayev, arrested in October 2016 apparently for documenting human rights abuses during Turkmenistan’s annual cotton harvest.

This week did see the apparent release of one political prisoner, albeit only after he served his full 15-year term. The Chronicles of Turkmenistan reported on May 4 that Seyran Mamedov, a dentist charged with participating in a highly suspicious alleged plot to assassinate then President Saparmurat Niyazov in 2002, was released from jail. Mamedov was not a major figure in the allegations. Niyazov blamed a cabal of ex-government officials and claimed to have identified all conspirators within hours.

Mamedov was one of 121 on a list published by the “Prove They Are Alive!” campaign. His release may provide a glimmer of hope for the other 120 listed political prisoners – or their families, who don’t even know if they are still alive.