Officials do not explain why they are imposing such stringent internal restrictions if Turkmenistan is, as they insist, genuinely coronavirus-free. 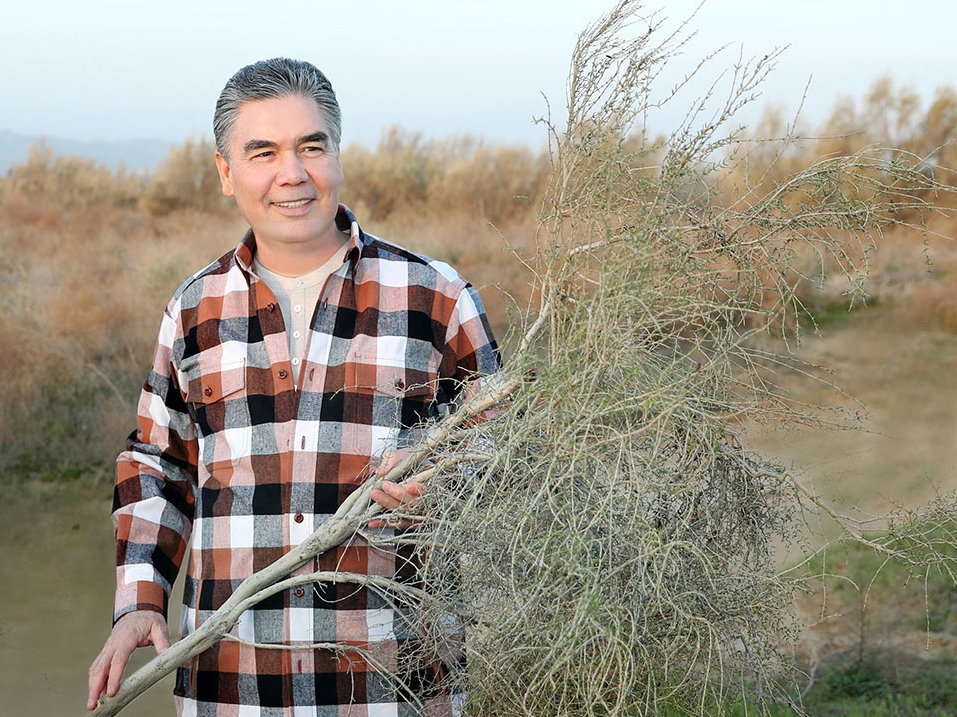 Having written several colorful tomes about the medicinal properties of plants, the president reckons himself something of an authority on the subject. (state media)

There has been grim news this week out of Turkey, where as many as 37 nationals of Turkmenistan are reported to have died after using surrogate alcohol to ward off possible coronavirus infection.

This incident is a sad example of the tragedies that can occur when people have limited access to reliable advice on how best to protect their health.

Back in Turkmenistan, the government has largely maintained its tomblike silence over the global COVID-19 pandemic. The subject has mainly come up in interactions with the outside world, such as when President Gurbanguly Berdymukhamedov discussed the matter over the phone with his Uzbek counterpart, Shavkat Mirziyoyev.

The Chinese government had the indelicacy to mention the pandemic in its message to Berdymukhamedov to congratulate him on the occasion of the Nowruz spring holiday. Beijing’s ambassador in Ashgabat has also spoken out through local media about his government’s fight against coronavirus, the alleged success of which he attributed to “Chinese speed, Chinese proportions, Chinese efficiency” and “the enormous advantages of socialism with Chinese characteristics.”

The Turkmen strategy is – if the government is to be believed (and it usually is not) – even more effective than that of China, since not one COVID-19 case has yet been confirmed. Ashgabat’s approach has been to shut all borders and suspend all international travel.

More recent measures raised the suspicion that the virus has nonetheless managed to filter through. RFE/RL’s Turkmen service, Radio Azatlyk, reported on March 24 that people wishing to move among the country’s five provinces must first obtain authorizations and a certificate confirming they do not carry the coronavirus. Huge lines of people wishing to get this certificate have formed at medical clinics and, as usual, there are claims that money is exchanging hands to expedite issuance of the document.

State media is not informing the public about these arrangements, leaving them to find out by other means.

Movement into Ashgabat was suspended on March 19, but then eased again on March 23, at which point people entering were required to have their temperature taken, Vienna-based Chronicles of Turkmenistan reported. Other checks seem remarkably cursory. A woman taking the train from Mary to Ashgabat told Chronicles that police officers were simply asking travelers if they had a temperature or a cough, and if the queried person said they did not, they were permitted to proceed.

In the city of Turkmenabat, in the Lebap province, mosques have been shuttered for disinfection and will remain closed until May 1, according to a Radio Azatlyk correspondent.

High-ranking officials from that province reportedly took even more extreme measures to protect their families, taking them all to live in tents at a reserve deep inside the desert, around 60 kilometers from the city. “Early in the morning, they leave for work in Turkmenabat in their official cars, and late in the evening they return with luggage racks piled with groceries and other necessities,” one source told the website.

Authorities almost never address reports in independent media directly, leaving the job instead to loyal outlets, such as Gundogar-News (not to be confused with an older, similarly named, opposition-run website). That Russian-language website fulminated in a March 20 piece written in Turkmen, which was likely submitted to it by a government body, about the “Age of Fake News” and how earlier Azatlyk claims about confirmed COVID-19 cases were nothing but sheer fabrications. The same website does not attempt to explain why Turkmenistan is imposing such stringent internal restrictions if the country is genuinely virus-free.

Turkmenistan chose, like Tajikistan, to disregard guidance on social distancing and proceeded with mass events to celebrate Nowruz, although many of these events had the mitigating grace of being held in airy, open spaces, as is customary.

History does not relate if Berdymukhamedov attended any of these feasts. The president tears through pet passions with considerable regularity and has latterly devoted much of his attention to matters horticultural.

He did this most memorably during a March 13 government meeting in which he spoke in glowing terms about the protective properties of the plant known in Turkmen as yuzarlik (Peganum harmala). This was intended as a nod to the coronavirus situation, and sure enough, in the days that followed his remarks, government buildings were fumigated with burning pans of yuzarlik.

Having written several colorful tomes about the medicinal properties of plants (all theoretically purchasable online), Berdymukhamedov reckons himself something of an authority on the subject. To impress this further on his public, he took a drive out to the desert last week to gaze at and fiddle with some shrubs. State television showed him then delivering a disquisition, while pointing at some pictures of plants with his golden-tipped stick as a cringing minion took notes.

By presidential fiat, 2020 is to be the year of Turkmenistan’s greening. In honor of the 25th anniversary of the country’s declaration of neutrality, around 10 million seedlings of various kind – deciduous, coniferous, fruit trees and vines – will be planted. Half of those will be planted in areas near the capital. Berdymukhamedov took a helicopter ride to take part in a huge landscaping effort on March 21.

Planting trees may be as much about safety as beauty.

On March 20, Berdymukhamedov granted his assent to Ashgabat city hall bestowing a contract on St. Petersburg-based company Vozrozhdenie to build infrastructure to help prevent mudflows. The capital was last year struck by damaging floods that generated much embarrassing grumbling in a city that is supposed to serve as the country’s showcase. Vozrozhdenie is expected to complete work on the mudflow-prevention structures by September 2022.

Russia’s patient policy of diplomacy through flattery yields its companies a steady trickle of such low-key contracts. Also last week, Berdymukhamedov authorized the purchase of two ambulance helicopters from Kazan Helicopters in Tatarstan. Fans of that sort of thing should confidently await state television footage showing Berdymukhamedov flying the aircraft, which will almost certainly never be used to assist the broader unwashed public.

With inexorable regularity, the dates have been set for the spring cotton-sowing campaign. Not for Turkmenistan all this namby-pamby talk of ending state orders for cotton, as Uzbekistan has done. Sowing will, accordingly, begin on March 25 in the Ahal, Balkan, Lebap and Mary provinces, and four days later in the Dashoguz province.

American patriots need not lament that it is only Russian companies profiting in Turkmenistan. As one official pointed out at the March 20 meeting, equipment recently bought from Illinois-based John Deere will be used during sowing.