Turkmenistan’s new leader receives an American official while his father visits Putin. And Ashgabat doubles the number of blocked websites. Our weekly briefing. 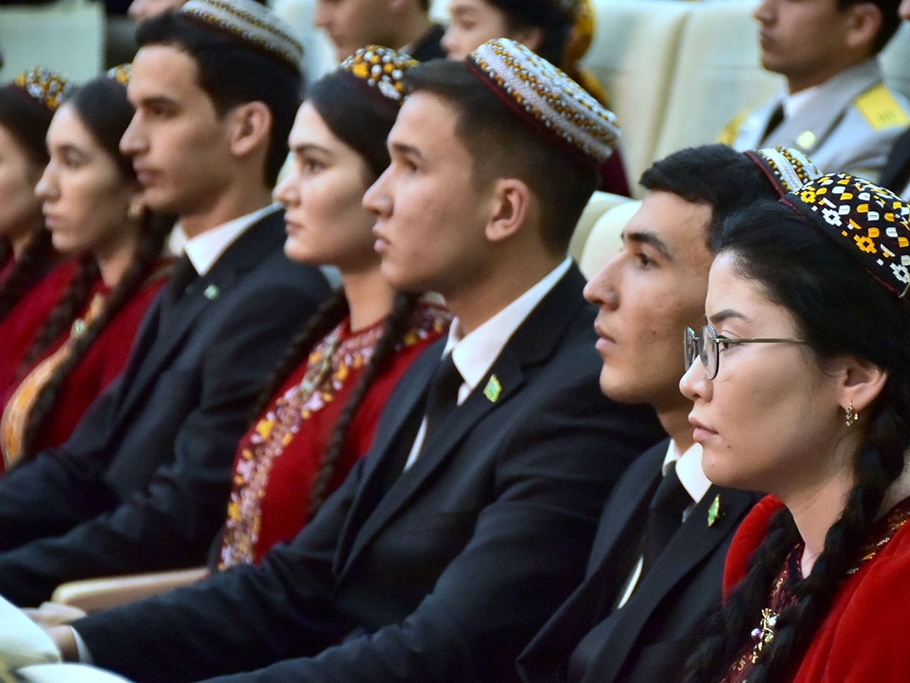 A few might be allowed to leave: Ashgabat has consented to resuming the FLEX student exchange program to the United States. (state media)

Turkmenistan has to a considerable extent thrown in its lot, at least on the economic front, with Russia. But it doesn’t have to be that way.

That was the message U.S. Assistant Secretary of State for the Bureau of South and Central Asian Affairs, Donald Lu, delivered during his visit to Ashgabat on November 6. Turkmenistan was the first stop on a six-day tour of Central Asia that is also taking Lu to Uzbekistan and Kazakhstan.

Lu’s agenda for the tour was, as outlined in a State Department press release that nodded very vigorously in the direction of Moscow, “to reinforce the United States’ commitment to each country’s independence, sovereignty, and territorial integrity.” According to the press release, the assistant secretary was, among other things, going to do a sales pitch on something called the Economic Resilience Initiative in Central Asia, which Washington is funding to the tune of $25 million.

Irony of ironies, some of the most detailed reporting on what the U.S. diplomat said during public pronouncements in Ashgabat came from Russian state media.

Perhaps the most eye-catching statement from Lu, as reported by TASS news agency, was that Washington was ready to work with Turkmenistan in helping it gain as much as possible from the sanctions against Russia. Lu pointed to Kazakhstan as a success story on this front, talking about how local subsidiaries of Russian banks, Alfa-Bank and Sberbank, have now been acquired by Kazakh businesses.

The economic risks for Turkmenistan in pivoting are relatively limited, he said at a briefing for journalists on November 6.

When Lu met with President Serdar Berdymukhamedov on November 7, he took a more circumspect tack – at least in the telling of Turkmen state media. The government website stated that “it was noted” during the talks (without specifying who was doing the noting) that achieving sustainable development and prosperity was contingent on cooperation in bilateral and multilateral formats.

There is a visible uptick in the pace of bilateral U.S-Turkmen dialogue.

Like when, in September, the commander of the Montana National Guard, Major General John P. Hronek, visited Ashgabat for talks on reviving cooperation within the National Guard state partnership program. The last time that tie-up was in force was between 1996 and 2011, and it has not been reactivated since.

In early October, a group of U.S. executives and the U.S. ambassador to Ashgabat got on a videoconference call with several top Turkmen officials for a meeting of the Turkmenistan-U.S. Business Council. The companies represented included many household names. The aspiration is to revive conversations broken off by the pandemic.

"Due to global travel restrictions caused by the COVID-19 pandemic, business cooperation between the U.S. and Turkmenistan has slowed down. But now that the pandemic seems to have become a less serious problem, it is planned to conduct a business mission of the heads of U.S. companies to Turkmenistan this year,” the executive director of the Turkmenistan-U.S. Business Council, Eric Stewart, said later that same month.

A fresh breakthrough announced during Lu’s visit was that the FLEX exchange program for high schoolers will once again be available to Turkmen young people from the academic year 2023-24. The resumption of the program following a two-year hiatus caused by COVID-19 required the approval of the Turkmen government, which has latterly grown more hostile than ever to anybody, including young people, leaving the country.

And Lu could not have passed through Ashgabat without bringing up the matter of the Trans-Caspian Pipeline project. The moment has come to make this a reality, since natural gas prices are so high, he told journalists. Washington would do its bit to help push the project forward, Lu said in remarks rendered into Russian by Moscow-based outlets.

“The U.S. is ready to help in any way possible, but we will not buy Turkmen gas, we have a lot of gas in the United States," he was quoted as saying by the business wire Prime news agency.

As far as multilateral structures go, Berdymukhamedov’s current dream is to quickly usher his country into the World Trade Organization. Turkmenistan formally applied for WTO accession in November 2021 and was granted applicant status in February. Given that the Turkmen economy is almost comically closed, it feels difficult to imagine this process will go anywhere especially fast, but Ashgabat may be eager to solicit U.S. assistance on this front.

But not so fast. Berdymukhamedov’s father, Gurbanguly, the former president and de facto current co-president (albeit formally only speaker of the Senate), was in Russia last week to profess his ardor for all things Russian.

Speaking during an encounter with Russian President Vladimir Putin on November 3, Berdymukhamedov the elder gushed over their two nations’ strategic partnership.

“Every year it grows stronger and broader, and it always keeps progressing,” he said.

In an indication that Putin had been well-briefed in advance on Lu’s visit, he said to Berdymukhamedov the elder that he hoped “Turkmenistan's policies toward Russia will continue in traditions that have been established by you.” Translation: Don’t let your son get any funny ideas.

Countless Turkmen teens may dream of going on those FLEX exchange trips, but access to Russian and Russian-flavored education is vastly easier. Berdymukhamedov the elder announced while he was in Moscow that the foundation stone for a Turkmen-Russian University would be laid in Turkmenistan in 2023.

It is hard to see a U.S.-style college in the mold of AUCA in Kyrgyzstan appearing in Ashgabat as long as the current regime is in charge. Free thinking and talking is not the Berdymukhamedov way. Their evolving internet policies are ample testament to that.

In September, state media reported that the government was poised to start exploring the creation of an autonomous national digital network. Reports provided no insight as to what that might be, although the suspicion is that the authorities are seeking to insulate their domestic cyberspace from the rest of the world, in ways similar to what China has done with a high degree of success.

Amsterdam-based outlet Turkmen.news has been following the case and has managed to obtain a document outlining the state’s roadmap for ensuring cybersecurity. Most troublingly, if unsurprisingly, the cybersecurity commission charged with overseeing this initiative is headed by the National Security Minister, essentially the head of the latter-day KGB.

The result of this approach is plain to see. As Turkmen.news has reported, citing its sources, if in September telecommunications regulators in Turkmenistan were blocking 1.2 billion IP addresses, which is around one-third of the entire number in existence, that figure had doubled to 2.5 billion by October.