Turkmenistan: Water fuss about nothing

Pro-government media are mocking reports of devastating floods as Turkmenistan sets a new record: world’s worst place to be a journalist. 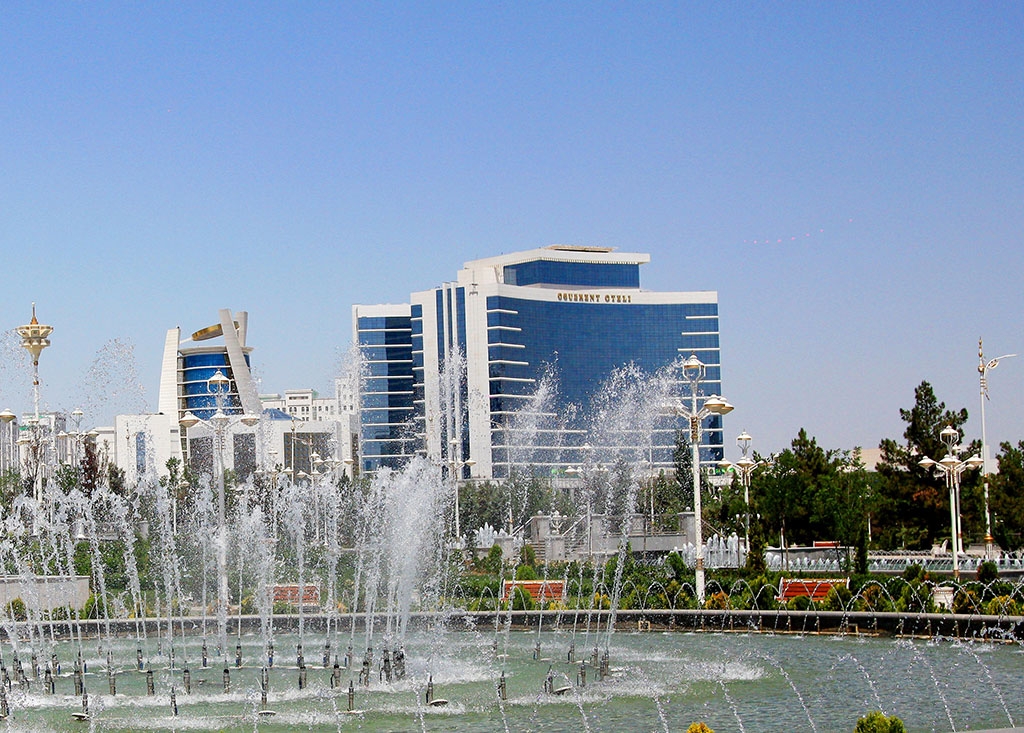 In Turkmenistan, water is a precious commodity reserved for fountains and the irrigation of golf courses. (Hasan Magadov/turmenistan.gov.tm)

Turkmenistan enjoys setting records, so one fresh development could be considered an achievement of sorts.

The country has ranked at the very bottom of the Reporters Without Borders 2019 World Press Freedom Index, thereby pipping North Korea to the title of worst repressor of the free press.

This intimidation has most recently been focused on Soltan Achilova, a former correspondent for RFE/RL’s Turkmen service, Radio Azatlyk. In mid-March, the 68-year-old tried to board a plane in Ashgabat headed to Istanbul, from where she was to travel to a conference in Georgia, but passport control officials informed her she was barred from leaving the country.

That Turkmenistan is devoid of independent media – bar the few brave souls feeding information to the likes of Azatlyk and other foreign-based operations – is beyond question. But the naked figures-based nature of the RSF ranking inevitably glosses over nuances.

In the past few years, Ashgabat has slightly fine-tuned its information machine by allowing the appearance of ostensibly privately owned and yet nonetheless fiercely loyal media outlets.

Those publications this past week made light of the floods that have left large swathes of this desert nation under water, logging fields, destroying an untold number of homes and even making areas in the capital city impassable.

Orient website waggishly noted in an April 15 piece that the smell of rain has been proven to have a calming effect and that moisture is good for the skin. The same outlet doubled down on the irony in an April 20 spoof mocking accounts from foreign-based Turkmen news outlets about how floodwaters had damaged people’s homes.

“You should put off building an ark until the holiday season – then we will have something on which to go for trips on the sea and the fishing will be rewarding,” the website concluded.

This caustic dismissiveness appears to have been prompted by an April 17 report in the Chronicles of Turkmenistan about residents of a nine-story apartment block in Ashgabat having to be evacuated following concerns that floodwaters had undermined the building’s structural integrity.

That Orient chides foreign-based outlets for relying on “rumors” is sickening chutzpah. Independent reporters are not allowed in or even, as Achilova’s case shows, out of the country. Citizen reporting is all that remains, and people engage in it at huge risk to their wellbeing.

There is no fathoming what the state media machine deems worthy of coverage. As the Chronicles of Turkmenistan, which is based in Vienna, astutely observed, the government press has still made no allusions to the resumption of natural gas deliveries to Russia, which happened on April 15. The circumspection is puzzling. The fact that officials deem this story ambivalent suggests something with the supply deal is not wholly to Ashgabat’s satisfaction.

Turkmenistan will in under a month from now be hosting the 10th edition of its annual international gas congress, and it is clear the stakes are especially high at the moment. President Gurbanguly Berdymukhamedov said at an April 21 government meeting that the congress would focus in part on increasing the country’s export potential. The thrust of the event will be to drum up interest in the trans-Afghan TAPI pipeline, the progress of which is far slower than Ashgabat would like.

If the government entertains cautious openness to foreign partners on the energy front, it is a different story in education. Azatlyk reported this week that the Education Ministry has drawn up a list of foreign universities whose qualifications will be recognized in Turkmenistan. The colleges deemed acceptable are in Russia, China, India, Turkey, Kazakhstan, Georgia and Belarus. The Azatlyk article makes no mention of whether any universities in Western Europe or the United States are on the list – it does not seem there are any, however. The article notes that people will only be allowed to send money abroad to students enrolled at approved universities. This will in effect foreclose the option of foreign study to countless young Turkmen people – a startling policy in view of the catastrophic shortage of high-skilled workers inside the country.

Decisions like these are particularly confounding when Turkmenistan is joining the line of regional nations professing a desire to embrace e-government and digitize their bureaucracy. Baku-based Trend news agency on April 23 reported that representatives from an Israeli IT company called BlackSparc met with Turkmen officials to discuss integrating digital technologies into the banking, healthcare and education sectors.

Turkmenistan is going through the motions of a developing a Digital Economy Development Concept for 2019-2025. As Ashgabat is limiting education opportunities and defunding research, it will likely remain almost entirely to outsiders to do the heavy lifting on anything vaguely technical. Considering that Berdymukhamedov’s industrial policy is largely centered on dubious import-substitution exercises, this feels even more perverse.

Still, one area of the digitalization agenda seems to be on track. TDH state news agency announced on April 19 that it is now possible to make payments for water bills by mobile phone. Internet users can even use their phones to check how much water they have used and how much they owe.

As has been amply reported, at the start of this year Turkmenistan scrapped its generous welfare-based allocation of free water to households and transitioned to a metered system.

Not that one would know it from the proliferation of fountains in Ashgabat, but authorities in the capital have begun taking a much stricter line on how water is used. In late March, Ashgabatagyzsuv, the city water utility, reportedly posted a note in the government’s Neutral Turkmenistan daily newspaper warning households to refrain from wasteful practices. Water intended for drinking should not be used for washing cars and carpets, the company warned.

The irrigation of the golf course that Berdymukhamedov visited in February is apparently considered a reasonable way to utilize this precious commodity, however.