While clumsy on COVID-19, Turkmenistan is being more sure-footed, or consistent at least, on the Afghanistan front. Plus, unsustainable agriculture. Our weekly briefing. 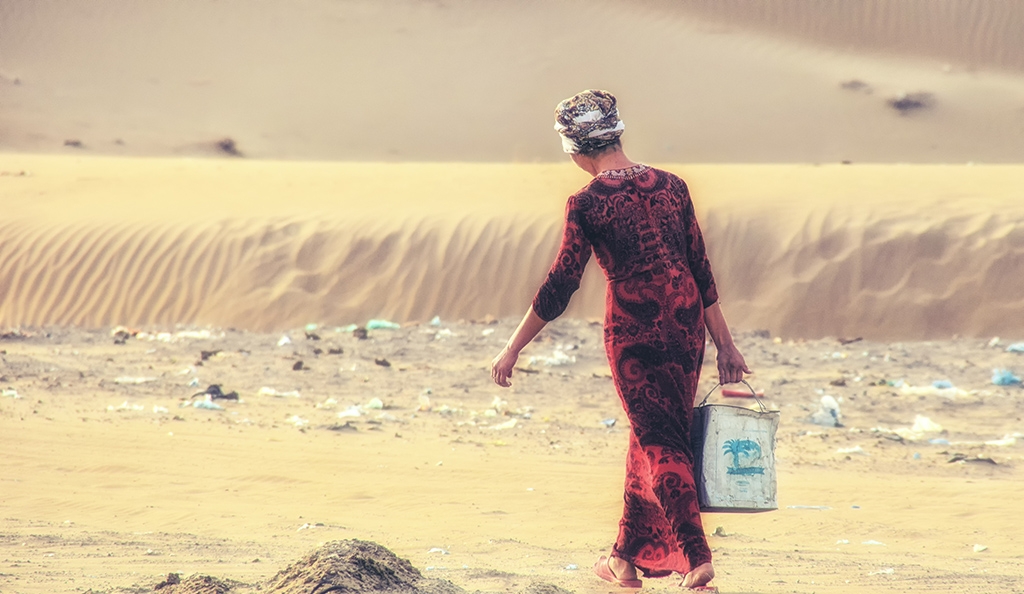 A woman carries water from a well near Darvaza (iStock/Atosan)

Schoolchildren in Turkmenistan don’t know if they’re coming or going these days.

With the alarm persisting over the unacknowledged COVID-19 outbreak, authorities reportedly put out the word for many schools to remain closed until at least October.

But when September 1, which traditionally marks the start of the academic year, came around, children from grades one through six did indeed attend class, Vienna-based Chronicles of Turkmenistan reported. Five new secondary schools were inaugurated on that day, according to local media, although it is not clear if teaching began in those.

President Gurbanguly Berdymukhamedov marked the day by delivering a lecture on history and “the duties and responsibilities of the younger generation” to a large hall of university-age youths, none of whom was wearing a mask.

A government anti-coronavirus battle plan obtained by Amsterdam-based Turkmen.news last month had explicitly stated that mass public events should be avoided. This provision does not appear to apply, however, to events over which Berdymukhamedov is presiding.

Early this week, the government seems to have had a change of heart – reversing a postponement it never actually publicly announced. Turkmen.news reported that teachers in the cities of Dashoguz and Turkmenabat were roused from their slumber on September 6 by school administrators, ordered to round up children and return to class.

“The principal phoned at 6 a.m. and said that he had only just learned himself about the reopening of schools,” a source in the Lebap province told Turkmen.news. “We only managed to put together half a classroom. The rest were either sick or refused to go to class.”

Chronicles reported on September 6 that pupils of all ages had returned to school in the capital, Ashgabat.

This should not be read as an indication of the COVID-19 emergency attenuating. Restrictions are still very much in force elsewhere. In Turkmenbashi, bank customers cannot get service unless they are able to provide a certificate of vaccination. There is no available information about how many people have been jabbed to date.

In the Dashoguz and Mary provinces, public transportation between districts has been suspended. Entry and exit from the city of Garabogaz, in the Balkan province, has been halted.

Turkmen.news, the outlet that has done some of the most exhaustive work on the unfolding epidemiological crisis, has described what it is characterizing as Turkmenistan’s third wave as the worst the country has endured so far.

“Sources are saying there are sick people in practically every family. It is assumed that the highly contagious Delta strain has entered the country,” the outlet said.

Plans are nevertheless staying in place for a large military parade to be held on September 27 to mark the 30th anniversary of independence. Berdymukhamedov received a briefing on preparations for that jamboree from Defense Minister Begench Gundogdyev on August 31.

There may well be a lot to show off. According to findings in the Global Peace Index, a yearly survey produced by the Australia-based Institute for Economics & Peace, Turkmenistan is among the countries to have seen the largest increase in weapons imports in 2021. And this is despite the fact, as the same report found, that “Turkmenistan has the lowest reported experience of violence rate in the world, at 1 percent.”

While clumsy on COVID-19, Turkmenistan is being more sure-footed, or consistent at least, on the Afghanistan front.

September 3 saw the inauguration of a new 432-megawatt gas turbine power generator in the Lebap province for the express purpose of delivering more electricity to Afghanistan, as well as Uzbekistan and Kyrgyzstan. The project was completed by Japan’s Sumitomo Corporation and funded by Japanese banks, so it was little surprise that Berdymukhamedov sent a note to Emperor Naruhito restating Turkmenistan’s commitment to serve as a reliable energy supplier to the entire region.

In another show of support for Afghanistan, the Foreign Ministry on September 1 announced it had resumed dispatching humanitarian aid to the country – a first since the Taliban took over. The delivery included medicine, protective clothing for medical personnel, disinfectant and drugs deemed suitable for treating the coronavirus.

Despite the unrest, rail and road traffic between Afghanistan and Turkmenistan only appears to have been interrupted for the briefest time. Trade means people moving across borders, and that in turn means the potential further spread of COVID-19, so the donation of medical equipment, while virtuous, is also simple common sense.

Turkmenistan may need to start thinking harder about its own requirements. State television on September 3 produced a characteristically heroic report on the start of the winter wheat sowing season – complete with endless drone shots swooping over lines of tractors and other agricultural machines. Farmers, according to state media, have been provided with all they could possibly want or need: high-quality seeds, mineral fertilizers, modern technology, and water. People tormented by the now-annual scourge of food shortages, which have extended even to basic staples like flour and bread, will certainly hope so.

The sowing campaign will be happening just as cotton farmers are busy harvesting. At a government meeting on September 3, Berdymukhamedov ordered that the work begin in four of the country’s provinces by September 8 and a week later in the Dashoguz province. Back in August, the president insisted that cotton harvesters meet their quota by September 27, ahead of Independence Day and one-and-a-half months before the usual deadline.

Unsustainable demands are made of Turkmenistan’s farmers every year, and there is an alarming sense the country may run out of road before too long.

A UN report released last month identified Turkmenistan as among the countries most exposed to poor air quality due to sand and dust storms. More than 70 percent of Turkmenistan’s agricultural land is exposed to dust deposition. And as the report notes, the storms degrade farmland areas. Potential aggravation of the phenomenon because of climate change bodes ill for the country.

New research out of the Food and Agricultural Organization, meanwhile, has highlighted the critical level of pressure placed on water resources in Turkmenistan. The FAO assesses Turkmenistan’s water stress levels at almost 144 percent – in the former Soviet Union, only Uzbekistan does worse.

In short, dry fields are poised to get dustier and unless water wastage is not constrained, partly by ditching thirsty cash crops that yield little obvious benefits to the farmers, chronic droughts will become the norm.