Turkmenistan: We Don't Need Any Help With Afghan Border 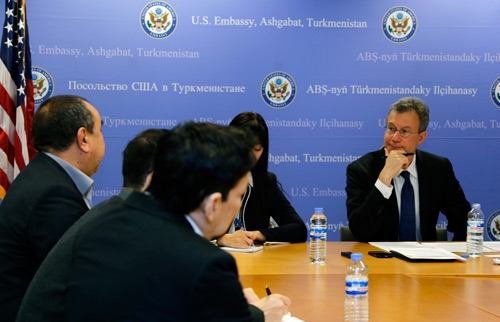 Turkmenistan's government has told the United States that it doesn't need help in protecting its border with Afghanistan, a senior American diplomat has said.

If true, this means Turkmenistan has changed its mind. Earlier this year U.S. military officials said that Ashgabat had asked for aid to help guard its southern border, which over the past couple of years has been the site of repeated clashes between Taliban militants in Afghanistan and Afghan and Turkmen security forces.

"The Turkmens recently expressed a desire to acquire U.S. military equipment and technology to address threats to their security along their southern border with Afghanistan," said General Lloyd Austin, the commander of U.S. Central Command, in testimony to Congress in March. "We will do what we can to support those requests."

This week, Deputy Assistant Secretary State Daniel Rosenblum visited Ashgabat, and gave a press conference on November 18 where he was asked about U.S. cooperation with Turkmenistan vis-a-vis border security.

"We have seen reports, some in the press and elsewhere, about incidents happening on the border not just recently but going back to last year on the Afghan-Turkmen border," Rosenblum said. "There was one incident that we have heard about in which some Turkmen border guards were killed. We have discussed this with our partners here in Turkmenistan, representatives of the government as well as other international organizations. And the Turkmenistan government has said that it feels they can guarantee the Turkmen border and doesn't require any additional assistance from outside."

This isn't just interesting in light of CENTCOM's statements to the contrary, but also in light of Ashgabat's sensitivity about public discussion of its border security. Last month, Kazakhstan President Nursultan Nazarbayev made a fairly innocuous public statement about "incidents on the border with Tajikistan and Turkmenistan," and the Turkmenistan Ministry of Foreign Affairs responded with an indignant denial: “The Turkmen side expresses its profound concern and bewilderment in relation to this untrue statement by the president of the Republic of Kazakhstan about the situation on the state border of Turkmenistan,” the ministry said in a statement.

Rosenblum's statement was more detailed than Nazarbayev's, but Ashgabat doesn't seem to have publicly complained about it. This could be because Rosenblum emphasized Turkmenistan's ability (or at least its belief in its ability) to handle the situation itself, while Nazarbayev was discussing possible regional responses, and was speaking with Russian President Vladimir Putin. Turkmenistan holds strong to its neutrality and wants to minimize the involvement of other states in its security.

Turkmenistan's responses to the increasing Taliban presence on its border have been mixed. According to a variety of reports it has carried out incursions in Afghanistan territory in order to drive back Taliban forces. It has shuffled high-ranking security personnel and concentrated its armed forces along the border. In one revealing episode last month, they apparently met some Taliban militants at the border, fed them and asked them to leave. The militants were later captured, and told Afghanistan television:

"They [Turkmen border guards] said: 'We will not give you a place here. We are neutral,'" the captive said. When asked who said that, the captive militant replied, "Turkmenistanis. They said, 'We will give you bread, eat this bread then go away.'"

It still seems highly unlikely that the Taliban could make any real inroads in Turkmenistan, with its relatively secular population and repressive security forces. But the response by Ashgabat nevertheless suggests confusion about what they need to do to deal with the situation.