The economic crisis will not deter wasteful spending. The education budget, however, is taking a hit. 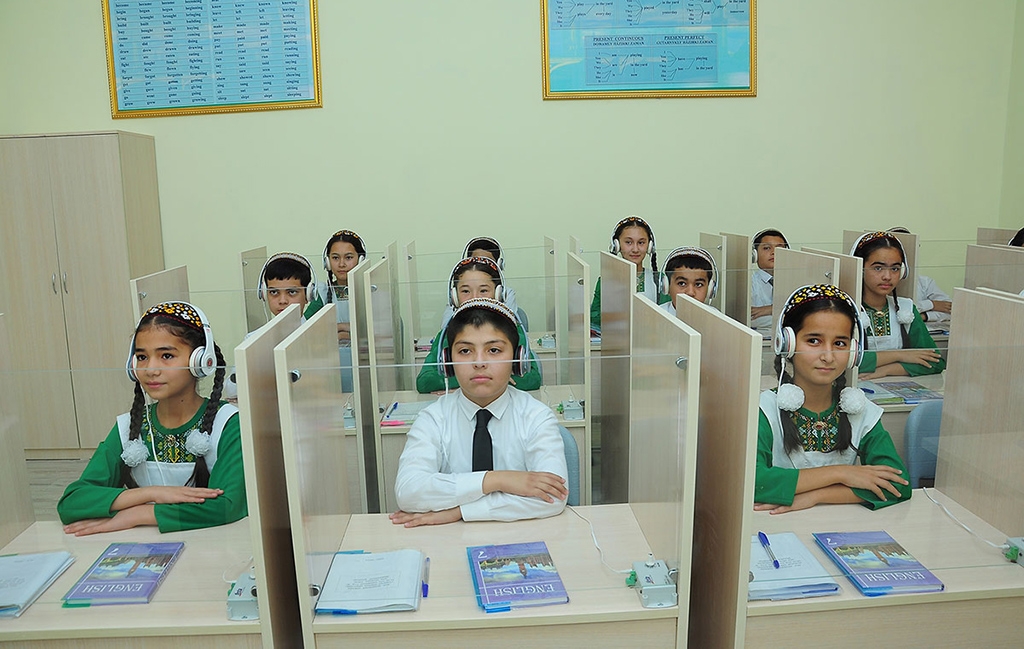 The president this week reasserted his title to the nation’s bicycling flaneur-in-chief with a 20-kilometer ride along the sunlit but eerily vacant southern edges of the capital, Ashgabat.

“President Gurbanguly Berdymukhamedov believes that sport is essential to bolstering physical health,” intoned an April 19 state news agency report on the excursion, which also earned an 11-minute slot in the evening news.

With that kind of thing in mind, the soccer season resumed again over the weekend, very much in defiance of the injunctions of global health experts against mass public gatherings. Not, in truth, that many people ever attend Turkmen soccer matches. AFP news agency reported that “around 300 people attended a top-of-the table clash between last season's champions Altyn Asyr and league leaders Kopetdag.” 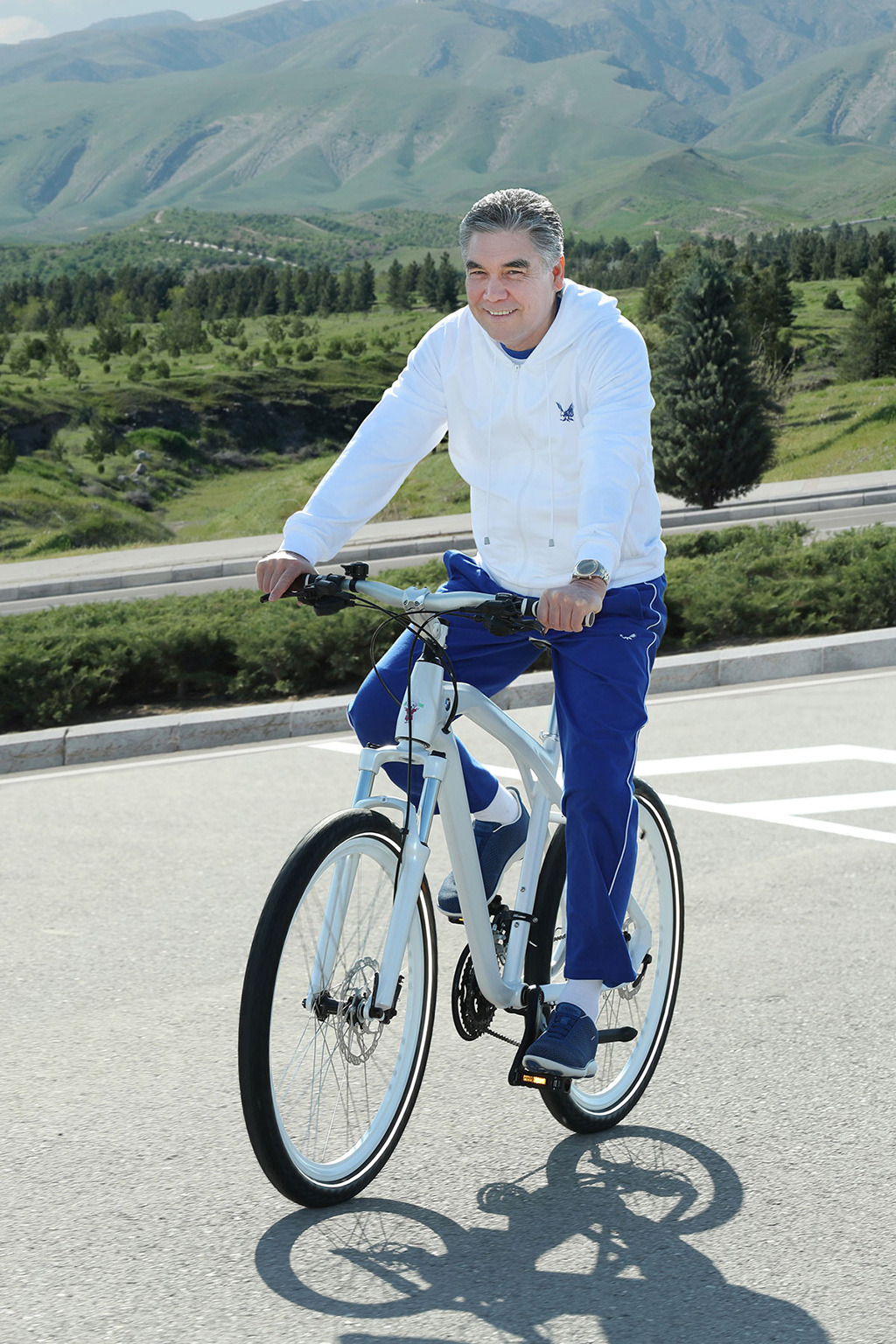 One ostensible purpose of the bicycle ride was to inspect ongoing building work. Gone is the talk from only a few weeks ago about cutting back to only essential construction, which appeared at the time like the government was bending to the inevitability that the impact of the global coronavirus crisis would lead to a period of belt-tightening. Among the developing sites that Berdymukhamedov viewed from his saddle were a future rostrum from which it is presumed people like himself will inspect parades, new premises for the soon-to-be-bicameral parliament, a luxury hotel and the headquarters of two local banks.

Retrenchment is sought in lower-priority areas.

Consider education. In his briefing on ongoing educational reforms, which include the goal of securing prestigious international accreditation for Turkmen universities by 2024, Deputy Prime Minister Purli Agamyradov noted that higher education institutions are transitioning to self-financing and collecting fees. College fees may be a familiar concept to people in the West, but it will likely prove a painful change for Turkmens. The idea of securing international accreditation, meanwhile, is evidently aimed in part at obviating the need for young people to go abroad for their studies, which many now do in countries like Belarus, China, Turkey and Russia.

There is a comforting predictability in Turkmen routines. Berdymukhamedov on April 17 signed a decree on rice production in 2020, ordering that output should reach 82,400 tons. This is the same amount, down to the last ton, as that decreed in 2019 and 2018, although up from the 81,600 tons of 2017. Ashgabat is evidently taking a relaxed view on the decision adopted by the Moscow-led Eurasian Economic Union trading bloc to impose a ban until June 30 on the export of a number of staple goods, including buckwheat, soybeans, sunflower seeds and rice. Not that the harvest is expected for a few months anyway, but it is notable to see this kind of resignation to dependence on others (Turkmenistan usually imports much of its rice) in a government that boasts so much about self-sufficiency.

The opposition-run Gundogar website, meanwhile, observed that back in 2006, Turkmenistan was, according to official data, producing 170,000 tons of rice and did not rely on imports.

Turkmenistan may no longer be able to grow this thirsty crop in useful volumes. A worrying report produced by Amsterdam-based Turkmen.news shows how fields in Dashoguz, one of the provinces in which rice is grown, have been rendered tired and useless by salinization. One shot in a video produced by the website shows soil encrusted by what looks at first almost like a dusting of snow, but which is revealed on inspection to be a thick caking of salt. This is certainly in line with earlier research. A 2016 paper by Ahmad Hamidov, Katharina Helming and Dagmar Balla, for example, noted that salinization affects a staggering 95.9 percent of irrigated lands in Turkmenistan.

There are more signs that unhappiness is festering in the regions. In an April 20 article, Vienna-based Chronicles of Turkmenistan reported on an incident from April 9, when people in the village of Magtymguli in the Mary province assaulted the manager of a state store following days of frustration at being unable to buy common items like flour and oil. To make matters worse, the shop manager had been surreptitiously selling to his relatives, the website cited its sources as saying.

Mary province was also the site of an unusual scene of dissent in early April, when villagers near the provincial capital squatted on the highway with demands to be provided flour and other staples. RFE/RL’s Turkmen service, Radio Azatlyk, reported at the time that protesting women complained that they had nothing with which to feed their children and demanded that state stores resume providing quotas of staple goods.

This makes it all the more remarkable that police officers are reportedly harassing enterprising people in the city of Bayramaly, which is just east of Mary, for trying to sell homemade bread at the local bazaar. Their objection, according to an April 20 report from Azatlyk is that these private bakers are using state-issued flour to turn a profit. Anybody able or willing to pay a massive bribe, though, is let off.

Improvising substitute solutions is something permitted only for the state or crony-run companies.

Turkmenistan continues to import vast amounts of cement from Turkey for all its costly constructions. According to Chronicles, which in turn cited Baku-based business news website Trend, Turkmenistan in the first quarter of this year bought $6.2 million worth of cement from Turkey, which was almost three-and-a-half times the amount it bought in the first three months of 2019.

When it comes to decorative curlicues, however, the president wants to tap local resources. At an April 17 Cabinet meeting, he was debriefed by his son, alternatively known as Industry and Construction Minister Serdar Berdymukhamedov, about ongoing efforts to boost production at quarries around the country with a view to increasing the supply of decorative materials, such as granite and marble tiles, for interior and exterior cladding. The three quarries mentioned produce pink, yellow-brown and green-gray stone, respectively, not the president’s beloved blistering white, alas, so the color palette of Turkmen buildings may one day present greater chromatic variety.