Turkmenistan: Welcome to Awaza, or No Trespassing

The inaugural Caspian Economic Forum, which was held in the hyper-developed but under-visited Awaza tourist zone, was high on expressions of intent but low on firm outcomes. 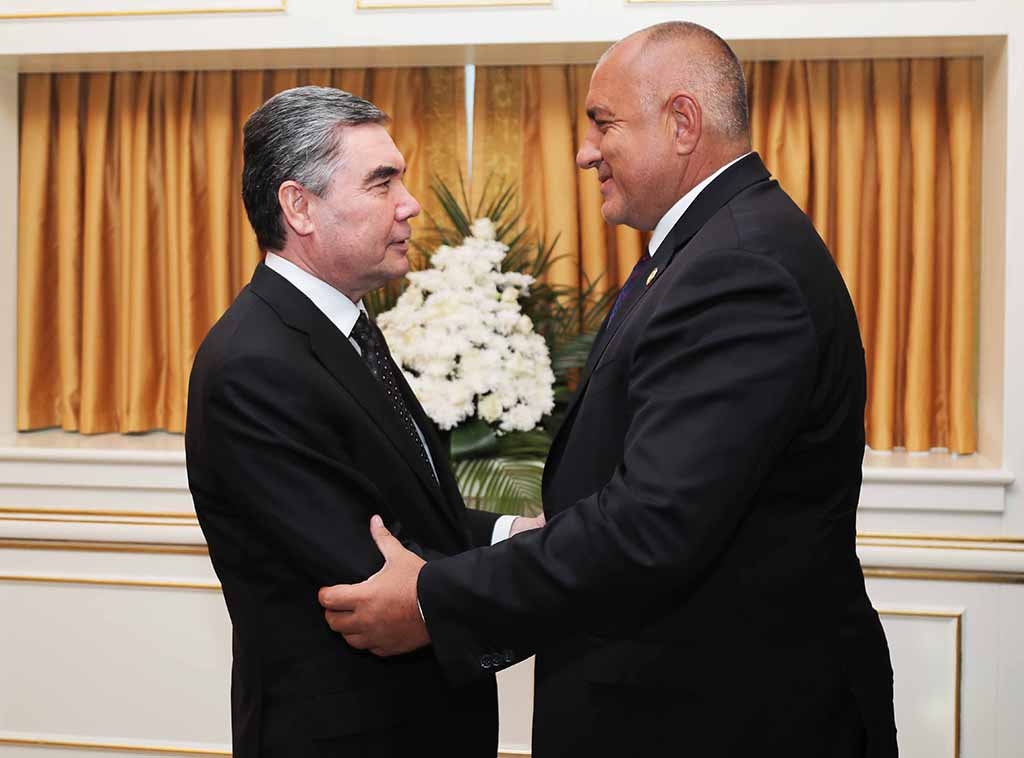 The president’s flamboyant return to state television after rumors of his early demise helped bring heaps of attention to his country. This came just in time for Turkmenistan’s biggest event this year – the inaugural Caspian Economic Forum.

The kind of attention garnered, however, strains the old line about how “there is no such thing as bad publicity.” Gurbanguly Berdymukhamedov is now vying with North Korean dictator Kim Jong Un (not to speak of U.S. President Donald Trump) for the title of most ridiculed world leader. Riffing on the president’s recent summer antics, popular U.S.-based comedians John Oliver and Trevor Noah have familiarized their fans with Turkmenistan in ways that Ashgabat could only find embarrassing.

Less comically, CNN published a special report under the headline: "A hermit nation ruled by an egomaniac: Is Turkmenistan on the brink of collapse?"

State TV continued to provide fresh footage of Berdymukhamedov over the past week, albeit in a slightly less eccentric key. In these clips, he was seen leading a cabinet meeting and taking a pleasure cruise on the Caspian.

But his appearance alongside Bulgarian Prime Minister Boyko Borissov on August 11 was perhaps his first interaction in months with somebody not in his inner circle.

Borissov was among the most high-profile attendees of the Caspian Economic Forum, which played out over the weekend. He sent out ambivalent messages by asserting that Sofia is exploring ways to import natural gas from Turkmenistan, while noting that the option of a Trans-Caspian Pipeline was likely off the menu because of environmental concerns.

Bulgarian Public Works Minister Petya Avramova was quoted by Bulgarian media as saying that she is involved in discussions to buy Turkmen gas through swap transactions that would see Russia playing the intermediary. This is an old export sale model for Turkmenistan and would be rendered possible in this instance by completion of the second strand of the TurkStream route.

Turkmen-Russian relations are going through a very rosy patch at the moment. Russian Prime Minister Dmitry Medvedev made it back to Turkmenistan to attend the forum, for his second visit since May. He was joined by Rustam Minnikhanov, president of Russia's Tatarstan region.

Other guests included the prime ministers of Uzbekistan, Kazakhstan and Azerbaijan. They all met with Berdymukhamedov, as did Iran's Vice President Eshaq Jahangiri. Side meetings between many of the politicians in town took place as well.

Despite Borissov’s apparent green opposition to the Trans-Caspian Pipeline, Peter Burian, the European Union's Special Representative for Central Asia, did offer some potentially positive comments. He said the EU had "resumed negotiations with Turkmenistan on participation in the financing of a Trans-Caspian Pipeline,” according to Russia's state-owned Vesti Finance.

Ashgabat-based, government-friendly news website Orient reported on August 13 that representatives from a Euro-Chinese consortium – which included Edison Technologies GmbH, MMEC Mannesmann GmbH, Air Liquide Global E&C Solutions and SINOPEC Engineering – met with Berdymukhamedov’s trusted advisor on energy issues, Yagshigeldy Kakayev, to discuss building the Trans-Caspian Pipeline. The consortium’s proposal would see it laying 300 kilometers of pipeline, design and build gas treatment plants and compressor stations and all kinds of other essential infrastructure. No estimate is provided as to what all this would cost.

Where Russia used to be the most intractable opponent of this initiative, Iran is now making unfavorable noises. Behrouz Namdari, an executive with the National Iranian Gas Company, or NIGC, was quoted by the Associated Press as saying "Iran is against any trans-Caspian pipelines. The construction of a trans-Caspian pipeline could inflict serious damage to the environment.” It was unclear from the reporting by AP and RIA-Novosti, which also conveyed the remarks, what role Namdari occupies in the NIGC.

The Caspian Economic Forum was held on the first anniversary of the signing – on August 12, 2018 – of the Convention on the Legal Status of the Caspian Sea. It was that document that was meant to serve as the green light – and this remains a contested matter – for mooted regional projects like the Trans-Caspian Pipeline. But the convention is facing scrutiny in the Iranian parliament, with the disputed status of the sea border serving as the main sticking point.

Kazakhstan, Azerbaijan and Turkmenistan have ratified the deal, and Russia will soon join, according to Medvedev, but Tehran has yet to do so. Iranian analysts have indicated their legislature may ratify only once boundaries are agreed.

The sea border issue is also a sticking point for Baku. Speaking about the Azeri-Turkmen seabed border, Bahram Huseynov, vice president of the State Oil Company of Azerbaijan, or SOCAR, told the Times of Israel that "no concrete steps have been made yet and it’s too early to discuss specifics.”

Overall, the Caspian forum, which was held in the hyper-developed but under-visited Awaza tourist zone, was high on expressions of intent but low on firm outcomes.

Sergei Prikhodko, first deputy chief of staff in the Russian government, declared that three national energy champions – Rosneft, Lukoil and Gazprom – were all interested in developing Turkmenistan's hydrocarbon fields. This is hardly news though.

The only agreement that was publicly discussed was Medvedev’s sale of limousines made by the Russian government-owned firm Aurus. Russia state TV captured the moment when Medvedev, looking for all the world like a car showroom salesman, clinched the deal to palm off a few models to Berdymukhamedov, whose possession of a now presumably vast fleet of exotic automobiles is in keeping with his overall tinpot dictator shtick.

Xinhua reported that representatives of China Development Bank, Huawei, PetroChina and CNPC attended the forum. These are all highly familiar names.

As RFE/RL’s Turkmen service reported on August 11, notably absent were regular Turkmen citizens themselves. Radio Azatlyk reported that some were ordered to leave their hotel rooms in Awaza, while movements of resident in the nearby town of Turkmenbashi were restricted. Residents of Turkmenbashi were also instructed to refrain from sacrificing animals for the Eid al-Adha holiday, which is being marked this week, in the interests of maintaining hygiene.