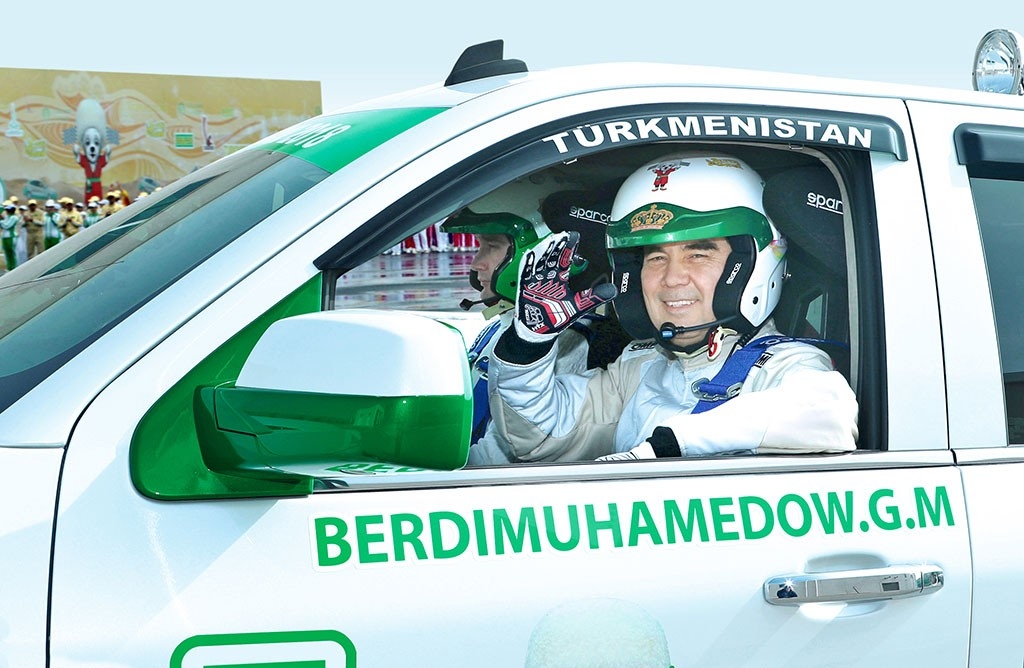 A highly unusual document landed a prominent spot on the website of Turkmenistan’s state news agency this week.

It should have been a historic event presaging at least a symbolic engagement with the outside world, but poor execution has made it clear that few in Ashgabat take rights especially seriously. Alternative News of Turkmenistan, a website run by disaffected exiled Turkmens, was quick to notice that large sections of the document were lifted wholesale from a document outlining the role of the Ombudsperson for Human Rights in Kazakhstan.

Much of the work done by Yazdursun Gurbannazarova, who was appointed Turkmenistan’s first-ever ombudsperson in March 2017, was decidedly wanting and glossed over the seemingly infinite violations perpetrated against the long-suffering population.

The report, which covers only a nine-month span, alleged that the Ombudsperson's office received 439 complaints over that period. Of those, 254 were formal written complaints, and only 141 of these appeals were "sent to the competent state and local government authorities.” Gurbannazarova’s report did note, however, that 69 petitions did not receive any response by the legally required date and that only 25 of the written complaints were formally addressed. That is a dismal 10 percent or so.

In any case, the complaints as reproduced by Gurbannazarova are weak tea and bear little similarity with the multitude of chilling reports of abuses that trickle out thanks to non-state media. One chapter in the report details some of the complaints, such as the one from an Ashgabat resident who reported that his refrigerator and television were destroyed by an electricity surge. The complainant said the local housing trust failed to respond to his request for repairs and compensation. Most of the petitions mentioned in the report relate to people who have had trouble finding work.

While unemployment is a very real issue, no mention was made of the brutal treatment and conditions found in Turkmenistan’s prisons. That task is left to the tireless and courageous correspondents at RFE/RL's local service, Radio Azatlyk, who reported on June 19, for example, that a member of the National Security Ministry arrested in a clampdown on black-market trading died after being subjected to tortured.

Nor did the ombudsperson’s report cite examples of the government effectively stripping citizens of rights as evidenced by Alternative News of Turkmenistan’s claim, in a June 18 article, that one Turkmen citizen who had the temerity to write open letters to President Gurbanguly Berdymukhamedov has been denied access to the internet and been placed under police surveillance.

Gurbannazarova’s digest did briefly touch on the government's egregious travel restrictions for its own citizens, noting that in one case her office was able to help a citizen who had been temporarily barred from leaving the country to seek medical treatment for their child in Russia. But there was no mention of how arbitrary and cruel the travel ban often proves to be. A video published by Azatlyk on June 23 shows passengers waiting at Ashgabat airport who were reportedly detained for just taking photos of themselves while buying tickets to Istanbul. Authorities have of late become deeply suspicious of anybody taking any photos that could prove embarrassing and compromising – such as anything showing lines of desperate shoppers at poorly stocked groceries stores – and this overreaction fits within an established pattern.

The already heart-rending story of Omriuzak Omarkuliyev, a victim of the draconian and perverse travel ban policy, became even grimmer. Chronicles of Turkmenistan, another foreign-based website, reported on June 22 that the father of the young man, who lived in Turkey but was lured back by the government and then jailed on spurious grounds, died suddenly of heart failure. Many relatives and friends reportedly refused to attend the funeral as they feared doing do would draw unwanted scrutiny from the security services. Omarkuliyev was sentenced to 20 years in jail on what has been described as a “political article,” a fact that effectively renders his entire family anathema.

As Chronicles of Turkmenistan has once more reported, mistreatment of the country’s inmates is rife. In a June 22 dispatch, they cite the case of activist Mansur Mingelov, who they say has been denied medical assistance.

That Gurbannazarova’s report was released at all is likely explained by her June 21 trip to Brussels, where she was joined by Turkmen Deputy Foreign Minister Vepa Hajiyev. The European Union news service on the visit noted, in a typically bureaucratic feat of understatement and mealy-mouthed equivocation, that while Turkmenistan remained in “non-compliance” on international human rights law in “several areas,” the country "has taken several positive steps as regards human rights." The only specific step it mentioned, however, was the creation of the post of Ombudsman.

Since European mandarins are determined to remain utterly indifferent to suffering, it falls to groups like Human Rights Watch to raise the alarm and suggest ways of pressuring Turkmen authorities. In a statement issued on June 25, HRW called on German technology firms to disclose whether they have been, or are considering, selling technology to Ashgabat for use in censoring communications and the internet. HRW noted that Turkmen state media reported on a visit by an executive of German tech firm Rohde and Schwarz in February.

President Berdymukhamedov has again failed to disappoint the lovers of crackpot-leader news this week. In another convoluted stunt, state television showed the president designing, personally assembling and then driving an off-road SUV. Reports saw him studiously poring over and drawing blueprints, with tools in hands tightening a part of a car’s undercarriage and then speeding madly over sand dunes. The purpose of these shenanigans is seemingly intended to convey Berdymukhamedov’s renaissance qualities. What was most interesting to Turkmenistan connoisseurs, however, was that the president’s son, Serdar, the presumptive heir who was recently appointed a deputy foreign minister, was also seen taking part in the car-building exercise. The metaphorical implications are glaring.

Still, prospective hopeful owners of those presidential-designed cars will now have to contend with more demands on their wallets. As Gundogar, an exiled opposition-run website, has reported, citing a law published in state media on June 20, the government has, in a fresh run at boosting revenues, raised taxes for car owners.

It isn’t all bad news though. Economist Intelligence Unit researcher Sam Bhutia has noted, for example, that China is reporting that imports from Turkmenistan for the period from January to May rose to $3.3 billion, a 16 percent increase on last year. The supporting data was culled from the Chinese Customs Administration.

Neutral Turkmenistan newspaper revealed in its June 19 edition that the government has banned polygamy.