Out-of-touch elites, poor planning, and some signs of progress in regional trade. Our weekly Turkmenistan briefing. 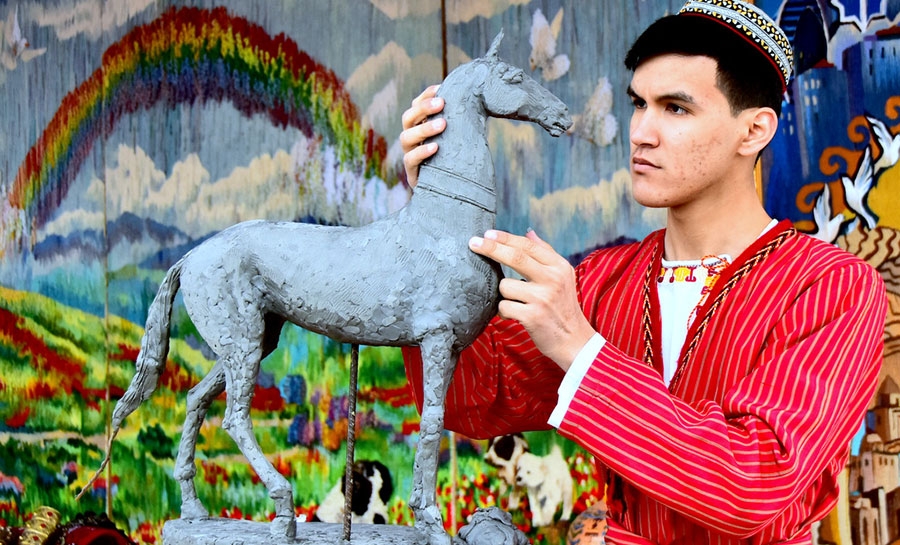 Golfing legend Greg Norman got into trouble recently for appearing to shill for the regime in Saudi Arabia by minimizing the gravity of journalist Jamal Khashoggi’s murder in 2018.

The truth is, however, that golf and dictatorships go together like peas and carrots.

On May 24, a representative for Nicklaus Companies, a U.S.-based golf course designer named after another great of the sport, Jack Nicklaus, met with Turkmenistan’s president and touted for business. Introductions were made by Eric Stewart, a former U.S. Commerce Department official turned lobbyist who heads the U.S.-Turkmenistan Business Council (membership fee: $3,500 per year).

Turkmenistan opened its one and only golf club in 2017. The 70-hectare course was the work of a company run by Nicklaus, who has made remarks about Turkmenistan of Norman-level obliviousness. The ex-player appeared to suggest in late 2016 that the then-president was trying to import golf into his desert nation for the benefit of the wider population.

"He takes it to all his people," he was cited as saying by The Associated Press.

Regular Turkmens are entirely uninterested in golf and couldn’t afford it anyway.

Recent months have seen sustained courting of Turkmenistan by Russian business interests, and the Americans don’t want to be left out in the cold. The opportunities are precious few, though. In naming U.S. companies active in Turkmenistan, President Serdar Berdymukhamedov could only bring up familiar old names like John Deere and General Electric, along with building machinery manufacturer CASE Construction Equipment and aircraft company Boeing. Sports are evidently viewed as a compelling investment prospect, although new golf courses are the last thing Turkmenistan needs at this time.

What is disheartening about foreign investment in Turkmenistan is the Groundhog Day repetitiveness of it all. The same people representing the same companies turn up in Ashgabat again and again.

On May 25, Gurbanguly Berdymukhamedov, the former president, father of the incumbent leader and now speaker of the Senate, met with the heads of two major Ukrainian industrial concerns, Altcom and Interbudmontazh. The pair were in Ashgabat as recently as late April and appeared to have nothing more to say on this occasion than they did then.

On the subject of things that keep repeating and not going anywhere, the city of Mary on May 27 hosted an international conference on the trans-Afghan TAPI natural gas pipeline. The purpose of the event was mainly for speakers – who represented the governments of Turkmenistan, Pakistan and Afghanistan – to wax lyrical about what great social and economic benefits the project will bring to the region. But there is scant sign of progress in the work as such. The deputy head of the TAPI implementation department at Turkmengaz, Baky Chariyev, said preliminary technical design was in place and that up to 10 audits and studies have been completed.

But as far as new investment goes, Ashgabat-based news website Orient mentioned only the Asian Development Bank, which it said had “expressed readiness to invest $1.1 billion into the implementation of TAPI.” In March, though, a Pakistani energy official noted that the ADB had paused involvement in TAPI until such time as the Taliban regime in Kabul achieves international recognition, which is not likely to happen any time soon.

While some things in Turkmenistan are in a permanent holding pattern, others are seeing a long-awaited change.

Vienna-based Chronicles of Turkmenistan reported on May 26 that railway connections between regions had resumed the week before on a trial basis. Service was suspended as a preventative measure during the COVID-19 outbreak that officials have always denied has happened. The trains will run from Ashgabat to Dashoguz and Turkmenabat twice weekly and from Ashgabat to Turkmenbashi every day, the website said. Other routes are slated to resume from June 1. Anybody boarding a train must present a negative coronavirus test result.

International air travel is slowly returning too. Turkmenistan Airlines said scheduled flights to Dubai and Kazan, in Russia, were set to resume from May 30 and June 1, respectively. One-way tickets to Dubai cost 6,700 manat, while one-way tickets to Kazan are 8,020 manat. As Amsterdam-based Turkmen.news notes, these prices clearly reflect the fact that Turkmenistan Airlines is thinking in black-market currency rates, since at the official rate of 3.5 manat to the dollar, those ticket prices would translate to $1,850 and $2,300. Even at the unofficial rate of around 20 manat to the dollar, those fares are steep by regional standards.

Aviation authorities are being more generous to foreign air companies. The management at Kerki international airport, which lies 60 kilometers north of the border with western Afghanistan, has announced it will provide ground services free of charge to aircraft landing to refuel. The 2.7-kilometer-long runway, which was opened in June 2021, means the field can in theory accommodate planes as big as the Airbus A380, the world's largest passenger airliner.

This urgent bid to drum up international custom only highlights that the airport was built, at considerable expense, without a clear and specific purpose in mind. Poor planning and implementation are sadly core features of Turkmen industry.

Only consider how, as Orient reported on May 27, Turkmenistan is currently working on securing a contract with Uzbekistan for the supply of mineral fertilizers. No volume was mentioned, although Turkmenistan bought 140,000 tons of ammonium nitrate from Uzbekistan last year to fertilize cotton fields.

And yet, Turkmenistan is supposed to be a minor fertilizer superpower of its own. In March 2017, the president inaugurated the Garlyk potash ore and mining complex, which was built as a turnkey project by Belarusian state-owned company Belgorkhimprom. The facility never got off the ground. Failure to make a success of this enterprise feels especially calamitous now that global fertilizer prices have shot up as a result of Russia’s war in Ukraine.

The Uzbek-Turkmen deal is at least a sign that regional trade is enjoying healthy times. In more evidence of that, Kyrgyzstan’s deputy minister of energy and industry Tilek Aytaliyev told lawmakers earlier this month that Turkmenistan is supplying the country with 1.5 billion kilowatt hours of electricity this year. That is up from the 500 million kilowatt hours delivered in 2021. In other regional business, Turkmenistan and Tajikistan are in negotiations to set up a joint venture to process oil and oil products to be exported to Tajikistan.

Informal transnational trade is growing so robust that it is even apparently worthwhile to smuggle Turkmen manat. Tashkent-based outlet Gazeta.uz reported on May 23 on the arrest of individuals trying to sell 290,000 manat in Tashkent and the surrounding region. The suspects were allegedly trying to trade at around 12 manat to the dollar.

Even if Berdymukhamedov the elder is no longer formally running the country, cult of personality initiatives designed around his person persist. State media reported on May 23 that his son, President Berdymukhamedov, had approved construction of a monument in honor of a horse owned by the former leader. Akhan is the white Akhal-Teke stallion that made world history in June 2018 by walking 10 meters on his hind legs in 4.19 seconds. Now, Berdymukhamedov the elder is taking personal charge of statue erection operations. At a May 28 working meeting devoted to planning for the new city being built in the Ahal province, Berdymukhamedov suggested that the street on which the statue is installed should also be named Akhan. The minions present quickly agreed to this proposal.