Turkmenistan: Who is Mister (Serdar) Berdymukhamedov?

The president-in-waiting is a notably dour character, unlike his stunt-loving father. 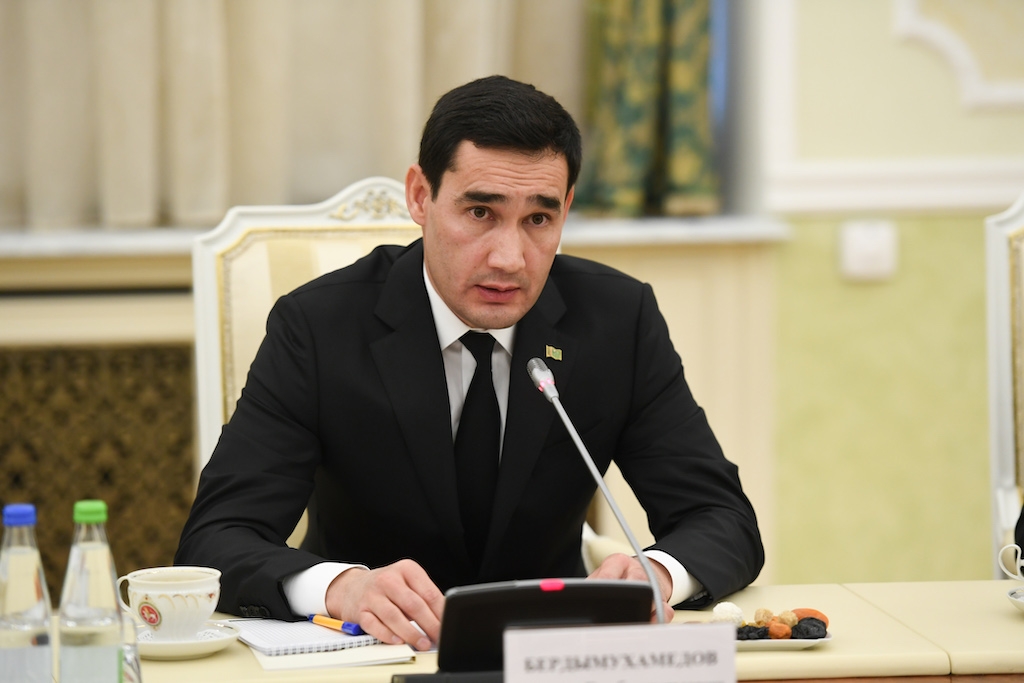 The résumé of Turkmenistan’s next president is well-trodden ground.

Serdar Berdymukhamedov, the son of the incumbent leader, Gurbanguly, who revealed over the weekend that he is poised to step down, has had a vertiginous climb through the ranks.

But little is known with certainty about the 40-year-old’s character. He barely ever speaks in public. On the few occasions he has delivered speeches overseas, he has read slavishly from his notes. Where Gurbanguly tries to project a cheery avuncular demeanor, Serdar is dour and has engaged in almost none of the outdoorsy antics beloved of his father.

Accounts from exile-run outlets are not encouraging. Serdar comes across in their reports as a foul-tempered character.

But predictably enough, when members of the Democratic Party gathered on February 14 to vote unanimously to nominate Serdar as their candidate, they had only good things to say.

“Speakers noted the excellent leadership and organizational qualities of their candidate for president,” a state news agency article on the assembly reported. “As a modest and likable person, a good family man and the practitioner of a healthy lifestyle, he has earned the respect of his colleagues.”

The same article also offered a rundown of his career to date.

Serdar graduated from the Turkmen State Agriculture University in 2001. While working at the Turkmen Embassy in Moscow, which he did from 2008 to 2011, he pursued studies at the Russian Foreign Ministry’s Diplomatic Academy.

The years that followed were a rapid trot through a series of jobs that look specifically designed as preparation for Serdar to one day serve as ruler of the country. For three years, up to 2013, he worked as deputy head of the state agency responsible for administering the country’s energy resources. For a two-year period in 2016-17, he headed the Foreign Ministry’s information department. In November 2016, he was elected as a member of parliament.

A cascade of important jobs succeeded in rapid succession from March 2018, when he was made deputy foreign minister. In January 2019, he became deputy governor of his native Ahal province, and then governor just five months later. He lasted one year as Industry Minister, leaving that job in February 2021 to take up his current post as deputy prime minister with the portfolio for economic affairs. Since starting this last job, Serdar has embarked on numerous trips overseas and has increasingly served as his father’s de facto proxy.

This is as far as any Turkmen official can get short of the presidency. The president doubles as head of the Cabinet, so the job of prime minister does not exist.

But Serdar wields influence in other roles too. At the same time as being made deputy PM, he was given a seat on the State Security Council and made chair the Supreme Control Chamber, a body which oversees government spending.

And for those who appreciate symbolic appointments, in mid-April 2021, Serdar took over leadership of the Ashgabat-based International Association of Akhal-Teke Horse Breeding from his father. The Akhal-Teke breed is revered in Turkmenistan and been made the object of its own equine cult by the government. Gurbanguly had headed the organization since its creation in 2010.

This spectrum of professional experiences makes Serdar different from his father in important ways. For all Gurbanguly’s pathological obsession with micro-managing – he has not been above devoting his attention to matters as trivial as potholes – it is never altogether clear he has a sense of the real state of the country. It has historically been a commonplace in one-man dictatorships for lackeys to keep their commanders in the dark for fear of incurring their rage.

Serdar, meanwhile, has specifically been given the work of keeping a close eye on the state of the economy. This task has at times been performed with a finicky zeal reminiscent of the senior Berdymukhamedov. At a Cabinet meeting in December, Serdar was charged by his father with the hands-on job of running checks in the regions to ensure bazaar traders were not engaging in price-gouging ahead of the New Year holidays.

And the future president’s youthfulness means he is, just about, Central Asia’s first digital native. He should, if he wants, be able to draw on the resource of information technology to get a clearer sense of the outside world’s narrative on Turkmenistan, thereby making the danger of being gulled by deceptive minions markedly less pronounced.

The conundrum, however, is whether Serdar is curious about the world and receptive to new ideas.

He is said to speak English in addition to Turkmen and Russian, although his halting recital of a written speech delivered at the 2021 United Nations Climate Change Conference in Glasgow in November suggests he is not comfortable with the language.

Serdar does not come off as very comfortable talking in public in any language, in fact. There was an awkward moment at the St. Petersburg International Economic Forum in April, when he robotically read out a vapid speech on urban development in Turkmenistan. Four minutes into his speech, the moderator brusquely cut Serdar off, warning him to wrap up.

He is allegedly more confident, but nastier, in person. According to Vienna-based website Chronicles of Turkmenistan, when Serdar ran the Ahal province, he behaved very like much the despot-in-waiting. “His favorite expression when talking to subordinates was: ‘I will wring your neck,’” one source told the website.

This apparent joylessness will dismay fans of the older Berdymukhamedov’s countless comical stunts, which have included firing handguns at targets while riding a bicycle, doing doughnuts in a car only meters away from the edge of fiery crater, and blasting barrels into smithereens with a machine gun. And horse-riding – a lot of horse-riding.

Troublingly for Serdar, given the traditional Turkmen fondness for all things equine, it is not obvious that he especially enjoys being around horses. A vicious rumor that has long circulated in exile circles has it that Serdar may even be afraid of horses and unable to ride them. Sure enough, when Berdymukhamedov father and son visited a state-run equestrian complex in June, Serdar looked uneasy and grumpy in the saddle and had to have his horse led by the bridle by his father. All this unverifiable scuttlebutt may, though, be little more than a crude, emasculatory attempt to undermine Serdar’s standing among his countryfolk.

In any case, if Serdar’s distaste for capricious pastimes stems from a devotion to hard work and a serious-minded commitment to effecting positive change, few Turkmens are likely to complain. If his grim manner reflects an intent to pursue an austere and iron-fisted line, however, the future looks bleak.