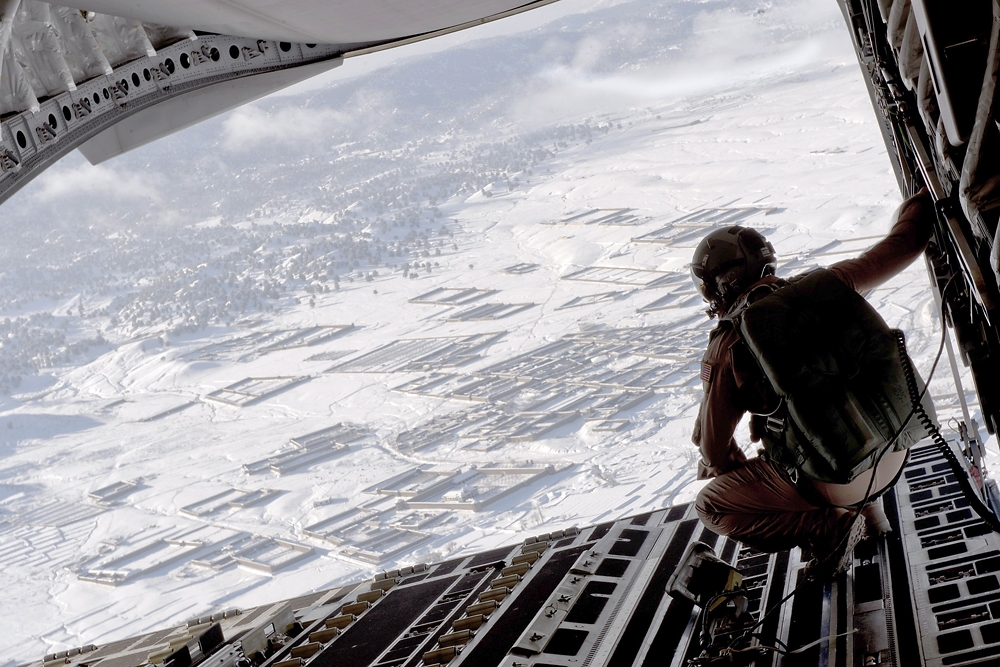 Reports claim that several thousand flights have transited through Turkmen airspace in support of the war in Afghanistan. (Photo: US Air Force/Master Sgt. Adrian Cadiz)

US diplomatic cables recently released by Wikileaks pull the curtain back on the open secret that is US-Turkmen strategic cooperation.

The United States has been using Turkmenistan since 2002 as a logistical oasis, as part of the war effort in Afghanistan. A self-proclaimed neutral nation, Turkmenistan has gone to great lengths to keep its security cooperation with the United States off the radar, the leaked diplomatic cables show. For its part, American diplomats have stretched the letter and intent of US regulations governing overflights in order to humor Ashgabat’s hunger for secrecy and cash, the cables indicate.

According to the cables, Ashgabat and Washington signed their initial blanket overlflight agreement in 2003. The pact, which is renewable on an annual basis, allows for up to 1,600 US military overflights per year. The agreement “is considered vital to maintaining an effective western air bridge to US forces in Afghanistan,” according to a cable dated November 27, 2007.

Other cables showed that the 1,600-overflights limit is a very loose cap. In 2008, some 2,159 flights transited through Turkmen airspace. The next year, American diplomats at the US Embassy projected that overflights would reach the 1,600 limit by mid-year. A cable, dated March 17, 2009, went on to say that Turkmen authorities had earlier explained that the overflight cap was in place for PR purposes “because they did not want to attract the attention/criticism of other countries (Russia, Iran).”

Trying to provide additional cover for Ashgabat, Turkmen officials were preoccupied with classifying US overflights as “humanitarian” in nature, the cables show. For US diplomats, finding a way to frame military overflights in ways that could satisfy Turkmen leaders presented a constant challenge. A cable dated November 20, 2007, described the issue of overflight classification as “the most sensitive one to the Turkmen.”

Another cable, sent on November 29, 2007, stated that the Turkmen government was “[concerned] that the overflights may not all be ‘humanitarian’ in nature, and thereby could threaten their neutral status.”

The extensive efforts to keep US-Turkmen strategic cooperation quiet did not fool anyone, especially Russian and Iranian diplomats in Ashgabat. The November 29, 2007, cable noted; “on more than one occasion Russian attaches at social events have adroitly commented on the volume of US air traffic across Turkmenistan. Not questioning--simply commenting, as if to quietly let it be known they are fully aware of the US activity.”

The cables suggest that US-Turkmen cooperation boils down to cash. In a May 1, 2008 cable, a US diplomat writes that Turkmen officials “only care that we ‘show them the money.’” The cable went on to caution that if Washington didn’t give Ashgabat what it wanted, then Turkmen leaders might take greater interest in the contents of American planes transiting the Central Asian country. “The current liberal interpretation of ‘humanitarian’ is in the USG's interest to maintain. And the Turkmen willingness to have an even broader interpretation of ‘humanitarian’ is even more so,” the cable added.

The cable also specified a few payments made by the Pentagon to Ashgabat: “[Defense Attaché Office] estimates USG aircraft total air navigation fees in 2008 will be $250,000 (based on roughly 225 USG aircraft landings at Ashgabat Airport annually in 2006 and 2007.) Total landing and parking fees for 2008 are projected to be $430,000 (based on payments from January - March 2008).” The total amount paid to Ashgabat in 2008 and other years is difficult calculate, given that an unspecified number of US government aircraft and planes belonging to US Department of Defense contractors transited Turkmen airspace. Many of these flights were subject to a different fee schedule than the one worked out under the blanket overflight agreement.

Turkmen officials’ insistence on charging “air navigation fees” created a headache for American officials because US regulations bar such payments. US officials raised the matter with Turkmen leaders, and, according to the May 1, 2008, cable, received a favorable response. “The Turkmenistan government informed us that it will stop charging air navigation fees to USG aircraft, as long as the Turkmenistan National Civil Aviation Service (Turkmenhowayollary - THY) continues to receive the same amount of income annually from the US Government's use of Ashgabat Airport,” the cable stated. “The details of how this would occur were not important to the Turkmenistan government.”

By the fall of 2008, a solution had been found. A cable, dated October 9 of that year shows that air navigation fees had been re-categorized as an “air company infrastructure charge.”

At one point in late 2008 or early 2009, the United States expressed a desire to more than double the number of overflights to 3,500 per year. Turkmen officials resisted the idea, citing technical limitations, according to a cable dated, April 23, 2009. The same cable shows that the United States didn’t initially take ‘no’ for an answer. “A team from [Air Force Central Command] visited Turkmenistan in June to explore technical ways the US could assist Turkmenistan's National Civil Aviation Service to increase the number of US overflights,” the cable said. “The team’s proposal is currently being staffed by [Deputy Assistant Secretary for Defense] /Central Asia which is examining both equipment and payment options based on the survey.”