Officials continue to insist that airborne dust, and not coronavirus, is the cause for alarm. 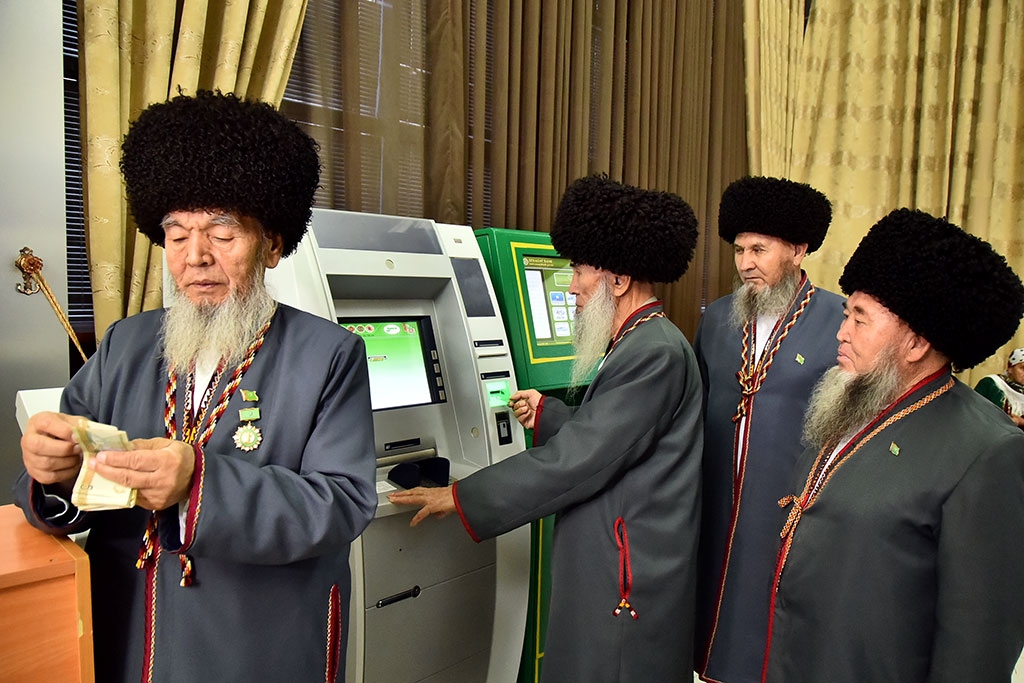 Authorities in Turkmenistan’s capital have come up with a novel solution for avoiding the appearance of epidemiologically perilous crowds: remove ATM machines.

Amsterdam-based Turkmen.news reported on July 22 that cash machines have been removed from a pair of bazaars and several popular shopping malls.

This policy has the additional benefit, from the government’s perspective, of ending the sight of dozens or hundreds of people waiting in line from early in the morning to get a hold of hard-to-find and gradually devaluating manat. RFE/RL’s Turkmen service, Radio Azatlyk, claimed that a 65-year-old woman was even killed in a brawl at one ATM in the Farab district of the Lebap province.

The poor cardholder-to-ATM machine ratio is something the Central Bank acknowledges. According to the latest figures, the number of bank cards in circulation rose by 8 percent in the first half of 2020, to 4.3 million. And yet the number of cash machine has stagnated at around 2,200 – and is now actually falling, as independent outlets show. That is one machine for every 2,000 cardholders. As if that were not bad enough, the number of in-store card terminals has been declining this year too – from 37,279 in January to 36,997 at last count.

Officials would object to this narrative, though, noting what they say is an increasing reliance on online card payments. They say, in fact, that digital transactions are gradually edging out cash payments. This is a typically cynical confusion of cause and effect, since even if the trend is as described, the reason would be that the government is giving its citizens ever less choice on how to utilize their money.

State television itself tacitly admits that getting an ATM to spit out money is something of a benediction, judging from how they occasionally broadcast images of cardholders tapping banknotes against their forehead in a ritual of gratitude.

It is tempting to suspect that officials charged with crafting the public message may be slyly conveying signals by code to the country’s leadership. The ongoing denialism over the coronavirus outbreak is a case in point.

Developments reached particularly farcical levels on July 27, when the Turkmen Foreign Ministry fired off a testy statement to complain about a segment on Mir, a Moscow-based TV news station that features largely milquetoast reports from across the former Soviet Union. A piece from Tajikistan apparently alluded to an expected rise in temperature due to hot winds blowing in from the direction of Iran and Turkmenistan. Ashgabat was angered because it suspects that the true intention of the report, which it described as “professionally illiterate,” was to imply that coronavirus is being blown by the wind into Tajikistan from Turkmenistan.

Is the Foreign Ministry attempting through this self-humiliating expedient to force the hand of the national leadership into finally admitting reality?

Although the official Turkmen position remains that the country has no coronavirus cases, President Gurbanguly Berdymukhamedov has warned that it could be carried in by the wind. The Foreign Ministry has explicitly stated that this notion is endorsed by the World Health Organization, which has failed to respond to requests from Eurasianet to either confirm or deny that it subscribes to the theory.

A full picture of the situation is instead provided in an English-language report compiled by the International Partnership for Human Rights that details, among many other things, the measures the Turkmen authorities adopted to thwart the WHO fact-finding mission that traveled to the country for 10 days earlier this month. These typically included moving patients out of COVID-19 treatment facilities before the arrival of the five-person team. It did the job. Dr Catherine Smallwood, senior emergency officer at WHO Europe, praised Turkmenistan for its “high level of preparedness for COVID-19,” while feebly advising that the government activate “critical public health measures … as if COVID-19 was circulating.”

Sure enough, health advisories are now issued day and night for the public to wear masks and maintain social distancing. On July 27, the TDH state news agency informed readers that the upcoming holy holiday of Eid al-Adha, known locally as Kurban Bayram, should be observed strictly within the family “due to the high content of harmful dust particles in the air.

Radio Azatlyk, meanwhile, is carrying nightmarish accounts of how at least 30 people a day are dying in the Mary province alone from something that appears, judging by the symptoms, to be coronavirus-related. Anti-flu drugs are disappearing from pharmacies as demand surges, the broadcaster has also reported. The same medicines can then be found in bazaars, but at hugely inflated prices. Medical workers are terrified to see one another in person and hold meetings by conference call. People wishing to quit jobs in hospitals reportedly face the threat of being prosecuted on charges of treason. Doctors and nurses must buy their own protective equipment.

Other outlets, such as the Analytical Center for Central Asia, which bills itself as a human rights media project run by local researchers, grasps at anonymous sources and satellite images of fast-expanding cemeteries to offer conjecture about thousands of possible coronavirus deaths. These figures must be treated with extreme caution, however. Another crowdsourcing effort – seemingly being run from abroad, but the information is scant – is attempting something more solid by listing the names of suspected coronavirus fatalities. As of July 28, the list comprised 50 names.

What is certain is that the government is going into overdrive when it comes to enforcing isolation inside the country. But on the international front, Ashgabat trumpeted its successes in engaging with the international community with its announcement on July 22 that it has become the 25th country to obtain observer status in the World Trade Organization.

While still enjoying his month-long holiday, Berdymukhamedov made a flurry of calls to rich and friendly leaders in the Middle East – namely, the King of Bahrain, Hamad bin Isa Al Khalifa; the ruler of Dubai and Vice President of the United Arab Emirates, Mohammed bin Rashid Al Maktoum; and the crown prince of Abu Dhabi, Mohammed bin Zayed Al Nahyan.

In the calls, every one of them initiated by Berdymukhamedov, the Turkmen leader dwells generically on prospects for future cooperation, but there is every appearance that Ashgabat is once again fishing for cash injections, most specifically to get its Turkmenistan-Afghanistan-Pakistan-India gas pipeline project off the ground. Earlier this month, Turkmen media stated that a certain Saudi-based company called Somo Al Mamlakah was offered the chance to get involved in TAPI, but nothing firm has yet come out of that overture.

There has been more reshuffling happening in the energy sector. Dovran Chishiyev has been appointed general director of the oil refinery complex in the Caspian town of Turkmenbashi. As opposition-run Gundogar.org noted, Chishiyev has become the 17th person to fill the post at this highly important industrial facility, and nine predecessors were fired for “serious shortcomings in their work.” The outgoing head of the refinery complex, Batyr Amanov, was earlier in the month named chairman of state natural gas company Turkmengaz.

Chishiyev and Amanov will not be thankful for the appointments. The coming months presage worker cutbacks as Turkmenistan tries to cope with the fallout of the coronavirus pandemic. Officials can pretend all they want that the virus is not present, but ducking the economic consequences will be harder to do.