Relations with Russia and Uzbekistan. A new city rises in the desert. And the state struggles to measure its farmland. Our weekly Turkmenistan briefing. 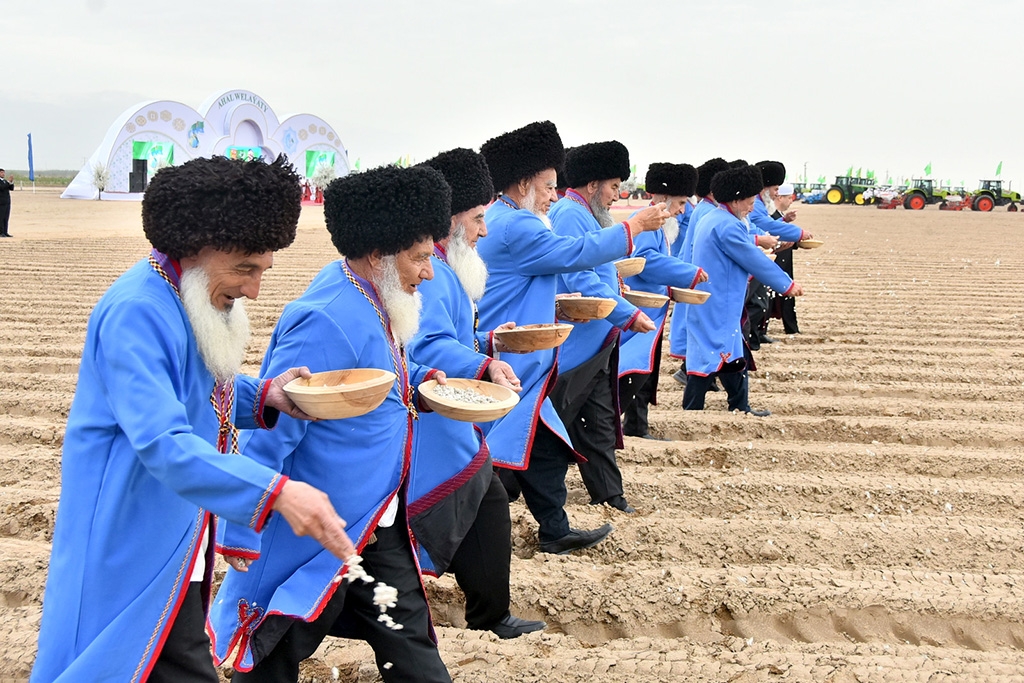 The president is continuing his father’s push to digitize, and presumably centralize, land management. (government handout)

Russia looks ever more isolated on the international scene these days.

In Turkmenistan, however, it sees a steadfast friend.

By way of a fresh confirmation of that state of affairs, Russia’s ambassador in Ashgabat this week gave an interview to TASS news agency in which he offered a highly upbeat assessment of bilateral relations in areas ranging from energy to security and trade to cultural cooperation.

The one area where the relationship has the broadest strategic relevance is natural gas. With Europe now scrambling to find ways to cope with a compelled decision to shed its reliance on Russian gas, one expectation might have been that Turkmenistan would seek to play the situation to its advantage. For that to happen, progress would be needed to turn the Trans-Caspian Pipeline, or TCP, into physical reality.

And yet, the TCP is all but absent from the agenda. Russia is playing it cool on this matter anyway. In his interview, Alexander Blokhin, Moscow’s envoy to Ashgabat, evinced relative indifference to the fate of the European market, which he described as a dead-end for Russia.

“Our main client has always been Europe, but now, because of current events that everybody knows about, the market in Europe has shrunk,” Blokhin told TASS. “Moreover, we send gas to China, which Turkmenistan does too. And China is a major consumer of energy resources, and I don’t think that we [Russia and Turkmenistan] are competing there, because China has set itself the task of increasingly transitioning to ecologically sound energy resources and dropping coal.”

Indeed, far from competing, Russia buys gas from Turkmenistan, fully 10 billion cubic meters of it in 2021, as Blokhin reminded TASS.

What is more, the ambassador said, Russian companies are eager to invest in Turkmenistan’s gas and chemicals industries.

“For example, we were prepared to get involved in reconstruction of Maryazot. There were negotiations,” Blokhin said, alluding to a nitrogen fertilizer plant in the Mary province. “[Negotiations] are still ongoing, so I cannot say how that will end.”

Russia is eager to show that heavy industry isn’t the be-all and end-all of the economic relationship, though. The volume of Turkmen agricultural exports to Russia in January-May 2022 saw a 30 percent increase on the same period a year earlier, Blokhin said. As even the ambassador was forced to concede, though, once energy resources are factored out of the equation, the numbers for overall trade are relatively modest.

“Trade turnover in 2021 was $865 million. In the first five months of this year it was $278 million, which is around 18 percent more than in the same period last year,” he said.

The lower-profile relationship that Turkmenistan is developing with neighboring Uzbekistan, meanwhile, may feel less geopolitically consequential, but it has greater and more immediate economic implications. Rarely a week passes of late without news of an initiative to ease this axis of trade.

For context, these are the figures: In the first half of 2022, Uzbekistan and Turkmenistan did more than $418 million in trade. The balance is very much in the favor of Turkmenistan, which exported $326 million of goods in that period.

Uzbekistan’s deputy prime minister with the portfolio for foreign trade, Jamshid Khodjayev, held talks in Tashkent on September 7 with his opposite party from Turkmenistan, Batyr Atdayev, on how to build further on that.

“The parties expressed mutual readiness to adopt measures needed to raise the volume of mutual trade to $2 billion in the near future,” the Uzbek Investments and Foreign Trade Ministry said in a statement on the meeting.

“The parties expressed interest in the joint production of cars, agricultural machinery and household appliances in Turkmenistan,” Turkmenistan’s Foreign Ministry said in a statement.

On the domestic front, the bulk of the government’s attention is probably going to be focused for the foreseeable future on the upcoming inauguration of the new capital of the Ahal province, which is scheduled for December. On September 10, President Serdar Berdymukhamedov visited the site to check on progress. Alarmingly, work appears to be a little behind, but there is no missing that date, so workers will be made to undertake Stakhanovite efforts.

“At present, all measures are being taken to accelerate the pace of construction of facilities due for opening,” the state news agency reported.

The government website provided more details on early plans for the city in an article published on September 12. In its first phase of existence, this yet-to-be-named city will see around 12,000 families housed in 258 residential buildings. The city will boast a marble-clad museum, library, and circus, along with dozens of similarly decorated government buildings.

Once it is finished, whenever that is, this $1.5 billion undertaking will accommodate up to 70,000 residents, according to officials.

Despite repeatedly expressing its desire to move the country to free market conditions, the government has retained its Soviet-but-not-quite-Soviet policies on management of agricultural land. Under reforms adopted in the mid-1990s, former collective lands were split into plots that were then doled out to families under long-term leases. This arrangement has required the leaseholders, however, to meet state-set production quotas, usually for wheat and cotton.

Just how all this land is administered in practice in the day-to-day is, like so much else in Turkmenistan, a bit of a mystery. The solution proposed by Berdymukhamedov, and his predecessor (his father) before him, is digitalization and a presumably concomitant centralization of land management. At a government meeting on September 9, he instructed the government to hurry up with the creation of a digital land cadaster.

In the same meeting, Berdymukhamedov ordered that a simplified system be established for farmers wishing to register virgin land for agricultural purposes. This speaks volumes about the sclerotic and ineffectual nature of the Turkmen regime. The authorities have been trying to get peasants to reclaim fallow land (in return for what is not wholly clear) with little evident success for almost three decades.