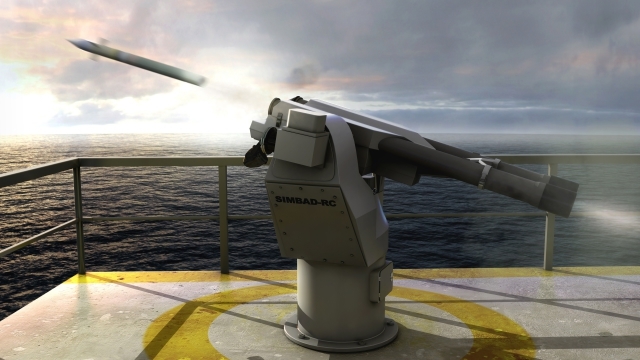 Turkmenistan has equipped its naval vessels with new anti-aircraft weapons, suggesting that Ashgabat may see a potential airborne threat to its coast or to its offshore oil and gas infrastructure.

According to recently published photos, Turkmenistan has armed at least two of its new Turkish patrol boats with French-produced SIMBAD-RC naval surface-to-air missiles. The missiles are produced by MBDA, which has not publicly acknowledged the sale to Turkmenistan, though Jane's reported on it, citing unnamed sources, in October.

The missiles were noticed by the invaluable Russian military blog BMPD, which saw the photos on a post by exile oppositon website chrono-tm.org. The photos came out of a visit by Turkmenistan President Gurbanguly Berdymukhammedov to some of the newly armed ships on January 17.

Turkmenistan has ten of the Turkish-made patrol boats, known as the Tuzla class, and it seems to be one of the priority projects for the Turkmenistan armed forces. According to the Stockholm International Peace Research Institute, these patrol boats have almost all of Turkmenistan's Western-supplied weaponry: in addition to these French missiles they are equipped with Dutch radars and Italian guns. SIPRI also reports that MBDA has sold 20 of the systems to Turkmenistan, which would suggest that all ten Tuzla ships are to be armed with them.

What's particularly intriguing about this purchase is that it seems to envisage the possibility of Turkmenistan's coastal areas being attacked by airplane. It's not clear where that threat may come from, but for what it's worth, BMPD's commenters seem to think it has to do with Turkmenistan's desire to build a gas pipeline under the Caspian Sea. That's something Russia strongly opposes and against which it has occasionally issued veiled threats. The European Union, meanwhile, supports it.

Russia isn't the only potential threat, though: according to U.S. diplomatic cables released by Wikileaks, Azerbaijani gunboats threatened Turkmenistan's gas explorations on at least two occasions in 2008, and the two sides still dispute a small part of the sea. And Iran, which borders Turkmenistan on the Caspian, is widely mistrusted by all the post-Soviet Caspian states.

Turkmenistan, as per usual practice, has said nothing about all this.
"Its military doctrine is purely defensive in nature," said the government's news release reporting on Berdymukhammedov's visit, "aimed at protecting the country's national interests and to oppose the threats of modern time."