Turkmenistan's president gets his golden dog

The Alabai is the eccentric president’s favorite breed. He’s even penned a book on them. 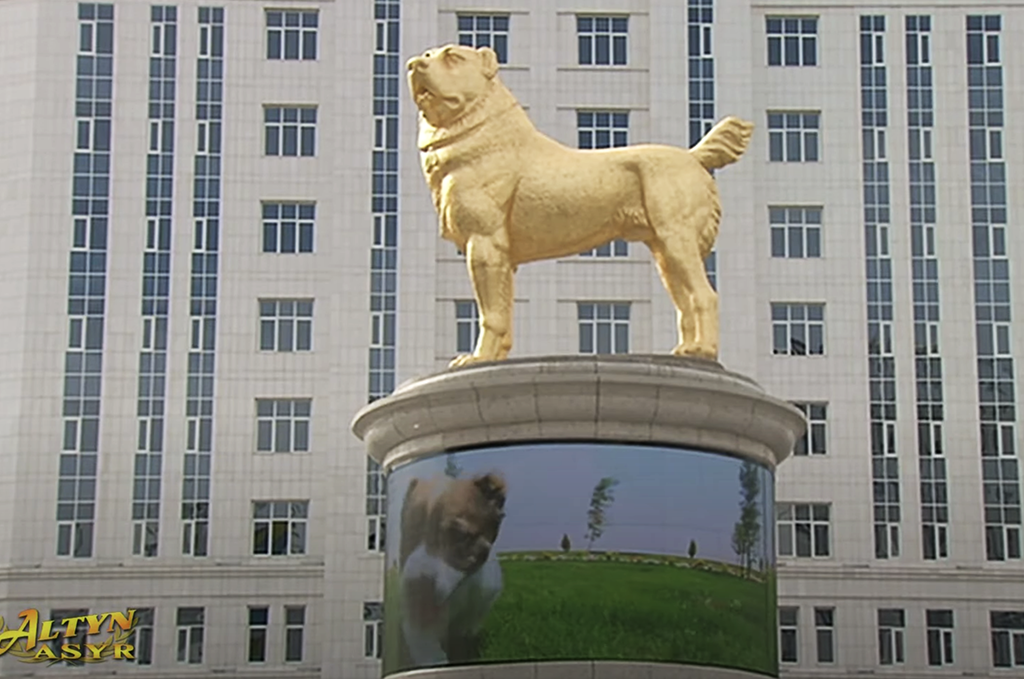 First there was the man on his horse. Then came the man’s best friend.

Turkmenistan leader Gurbanguly Berdymukhamedov has finally followed through on a promise to honor the nationally revered Alabai dog with a statue.

A state television report that aired on the evening of November 10 showed Berdymukhamedov gazing happily at a gold-leaf canine – the centerpiece of a residential area designed for civil servants in Ashgabat.

Turkmenistan’s state news agency wrote that the six-meter statue captures the “dignity and self-assuredness” of the bulky-skulled shepherd breed.

In a song and dance-filled ceremony opening the residential area, an elder handed an Alabai puppy to a young boy, symbolizing the dog’s constancy through generations of Turkmen.

The new monument that was commissioned several years ago puts the Alabai in exalted company at the forefront of state propaganda.

Previously the only animal to be celebrated in local sculpture was the Akhal-Teke horse.

But the dog’s increasing prominence during Berdymukhamedov’s second presidential term has not come at the expense of the Akhal-Teke. In his book on Alabai published last year, Berdymukhamedov explained that the ancestors of modern-day Turkmen had seen “in the Akhal-Teke their dreams and in the Alabai their happiness.” The culture ministry is currently preparing UNESCO intangible heritage bids involving the two animals.

Berdymukhamedov’s son Serdar Berdymukhamedov, a minister and lawmaker seen as a likely successor, chairs the International Alabai Association. Its inaugural conference was held in Ashgabat in August.

The Alabai monument is in many ways reminiscent of a statue of Berdymukhamedov on horseback that was unveiled in 2015 and marked a high point in his leadership cult.

Both were completed under the gaze of the same architect, 71-year-old Sargart Babayev. They are also both located on roundabouts, rather than in more pedestrian-friendly central areas of the capital.

A key difference in the second structure is a wraparound LED display screen that shows footage of real Alabais at play.

Berdymukhamedov’s professed love of native animals, expressed through poetry as well as more encyclopedic works, has only grown as the country slides deeper into an economic crisis bearing evidence of food shortages.

But the state media reports on the new Ashgabat residential area, which is apparently ready to house over 1,000 families, betrayed no sense of financial stress. The new area includes 16 apartment buildings, a shopping center, two cinemas and spaces for sport and leisure, the state information service said.

There was no mention of the cost of construction, which was overseen by local firm Altyn (“Golden,” appropriately enough).

Public work projects of this type fall under the direct purview of the younger Berdymukhamedov, who was made head of the newly formed industry and construction ministry in February.