The return of restrictions on memorializing the World War I-era massacres is part of a wider crackdown on dissenting views, critics say. 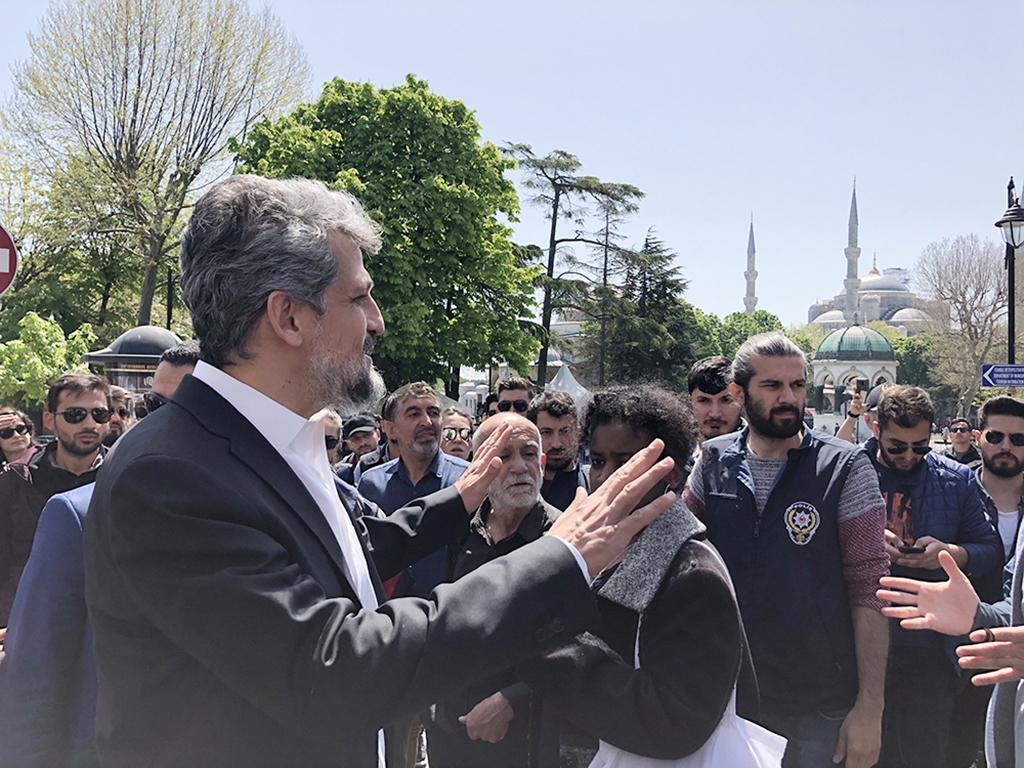 Rights campaigners stage a “remembrance walk” in central Istanbul on April 24 after police barred their commemoration of the World War I-era genocide of Armenians. Lawmaker Garo Paylan (foreground), who is of Armenian descent, has submitted motions to parliament seeking recognition of the genocide. (All photos Ayla Jean Yackley)

Hundreds of Turkish activists marked the anniversary of the Armenian genocide on April 24 under a heavy police presence and despite a counterdemonstration as authorities step up restrictions on commemorating the century-old killings.

In recent years, grassroots events have sprouted in Istanbul and a few other Turkish cities to memorialize the killing of as many as 1.5 million Armenians during World War I by Ottoman Turkish forces. Even President Recep Tayyip Erdogan has expressed his condolences over the loss of life every April 24 since 2014, though he has stopped short of recognizing the massacres as a genocide.

About 250 campaigners staged a vigil on the side of busy road, forced to regroup a few kilometers from Istanbul’s central Taksim Square where they had gathered for a moment of silence in years past. Organizers were careful to avoid using the word “genocide,” holding a sign that said they were “remembering those who had been lost.” Nearby, a few dozen nationalists accused them of propagating “an imperialist lie,” a witness said.

Earlier in the day, police stopped several dozen human rights defenders and lawmakers from Turkey and Europe from reading a statement outside a former prison in the central Sultanahmet Square, citing a ban on their event by the Istanbul governor. Last year the event had been allowed, though police intervened and detained attendees for using the word “genocide.”

The site, which is today an Islamic art museum, is where a group of 235 prominent Armenian figures were rounded up on April 24, 1915, before their deportation to Ottoman hinterlands where most died. The event is widely considered the start of the genocide.

This year, the protesters attempted a silent “remembrance walk” as police forced them to leave the area. They read their statement at a rights association’s office while riot police stood guard outside.

For his part, Erdogan sent a letter to the Armenian patriarch of Istanbul, saying: “I remember the Ottoman Armenians who lost their lives during the difficult conditions of World War I, and I express my sincere condolences to their grandchildren.”

But earlier in the day he railed against foreign governments that describe the events as a genocide, saying those countries themselves had committed atrocities and that Turkey’s archives show it has nothing to hide. “Deportations are one thing, massacres are another. Who are you trying to fool?” he said in a speech referring to the expulsion of Armenians that led to many of their deaths.

The change in Erdogan’s tenor and the partial ban on commemorations reveals how uneven Turkey’s reconciliation with its darkest chapter remains. Turkey argues that both Turks and Armenians died during the turmoil of war and the collapse of the multicultural Ottoman Empire, from which the modern republic was forged.

It also reflects a tide of nationalism in Turkey, especially since a divisive election last month in which the president accused the opposition of aiding “terrorists” for reaching out to Kurdish voters, and a broader clampdown on freedom of expression as Erdogan has consolidated power and crippled civil society following a 2016 failed coup attempt.

The constraints “are the result of the current political climate and rising nationalism. It appears the government has lost its will to resolve the Armenian issue, that it has reverted to its former position,” Garo Paylan, a Turkish-Armenian lawmaker from an opposition party, said in an interview.

“The refusal to grant Kurds’ demands, the erosion of the rule of law, detentions of peace activists, the inability to reconcile with the Armenian genocide and our other democratic problems are all connected. Every crime that goes unpunished will be repeated,” he said.

Paylan has faced criminal complaints for previous efforts to force Turkey to recognize the genocide. This week, he submitted another motion to parliament calling for an investigation into the fate of the intellectuals who were detained in 1915, a search for their remains and for their burial. His motion was unlikely to be accepted by parliament, which is dominated by Erdogan’s party and its partners, the far-right Nationalist Action Party.

Turkey is also fending off efforts by foreign governments to recognize the massacres as genocides. The U.S. Congress is considering a bill “affirming the United States record on the Armenian Genocide,” introduced earlier this month.

To date, the United States has refused to recognize the events as genocide, thanks to its close military and diplomatic ties with NATO member Turkey. But the relationship has soured in recent years over disputes with Washington on weapons sales, Syria policy and Turkey’s detention of U.S. citizens.

Other countries are increasingly responding to Armenian calls for recognition in what they say was the 20th century’s first genocide. Italian lawmakers this month passed a motion to officially recognize the genocide. And France this year declared April 24 an official national day to mourn the victims of the genocide.

On Wednesday, Erdogan blasted France for “trying to teach us a lesson” when it had yet to confront its own culpability in the 1994 Rwanda genocide and a bloody crackdown on pro-independence Algerians in 1961.

“Turkey plays an important role on the world stage [but] it has to conform to international standards in terms of human rights,” said Mireille Clapot, the vice president of the French parliament’s foreign affairs commission. “You cannot deny the facts, and one day the Armenian genocide will be recognized.”

Most scholars and 30 countries have concluded that the massacres of Armenians beginning in 1915 were a systematic genocide perpetrated by state officials, wiping out a millennia-old civilization in Turkish lands. Today, just 60,000 Armenians live in Turkey, a country of 80 million people.