The host expressed what many Georgians – and Russians – feel, but many worried that it could unnecessarily escalate the ongoing crisis between the two countries. 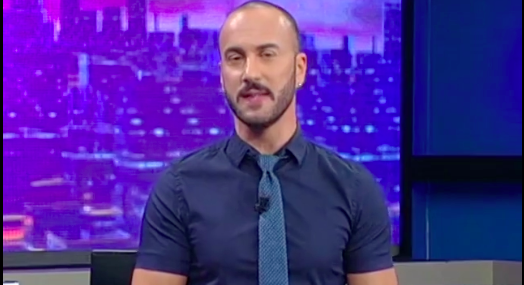 A popular Georgian talk-show host’s elaborate, obscene diatribe on live TV against Russian President Vladimir Putin sparked a national furor and fears of retaliation from Moscow, as well as worries about an overreaction from the Georgian government itself.

Nobody is quite sure what got into Giorgi Gabunia, a prime-time talk-show host at Rustavi2 news network, on the evening of July 7. It was clear that he was up to something when he began his widely watched show, Postscript, speaking in Russian and starting out by sending greetings to Putin, perhaps the most hated man in Georgia. “Vovochka, you street scum, you piece of dog----,” he continued, quickly escalating toward more and more filthy and elaborate forms of the sexual, scatological, and insulting profanity in which the Russian language is so rich.

Gabunia delivered his screed in an oddly calm tone, reading from a laptop screen, and when he was finished proceeded on to the main news of the day in a business-as-usual manner.

But jaws had already dropped in front of TV screens across Georgia.

Many viewers took to Facebook to ask that if what they just saw and heard was real. Some were outraged by the foul language, others condemned Rustavi2 for trying to poke Russia. The channel’s management quickly apologized for what it called a violation of the station’s ethical standards, but most critics remained convinced that the controversial broadcast had the management’s imprimatur.

Rustavi2, in fact, has had a cursing problem for a while. The station’s director, Nika Gvaramia, has sworn in live broadcasts more than once, but Gabunia took the cursing to an entirely new level.

An angry crowd gathered to protest at Rustavi2’s headquarters in Tbilisi later in the evening. The Georgian government, in the meantime, appeared to have sensed an opportunity to get back at the station known for its unrelenting criticism of the current authorities. Top officials from President Salome Zourabichvili to Tbilisi Mayor Kakha Kaladze condemned Gabunia’s escapade as an attack on national security. “It is unacceptable to leave a provocation of such scale, even if camouflaged as an act of patriotism, without the strictest response,” Kaladze wrote on his Facebook page, describing Gabunia as an “enemy of the state.”

“The government should once and for all remove from its political rhetoric the talk about measures against freedom of expression,” Koridze said in a statement for the news website Netgazeti. “The more we say things like ‘Rustavi2 must be closed’ and ‘Gabunia should not be allowed on the air,’ the more we will become similar to undemocratic countries, like Russia itself.”

Georgian-Russian relations have hit a new low in the past month, following a scandalous appearance by Russian lawmakers in the Georgian parliament. Now Gabunia’s jeremiad has further ruffled feathers in Moscow.

“We categorically condemn the unprecedently base stunt with unacceptable attacks, in foul language, against the Russian leadership,” the Russian Foreign Ministry said in a statement. “This egregious incident is a vivid testimony to where wanton Russophobia leads.”

Some Russians, however, appeared more accommodating. “The Georgian TV host said on the air what half of Russians say when they go to a store or pay utilities,” one Russian Facebook user said in comments under the Moscow radio station Ekho Moskvy’s story on the episode.

On July 8, Rustavi 2 announced that Gabunia would be suspended for two months.