Azerbaijan has been playing hardball with Armenia over the prisoners it continues to hold. But with a botched POW release that wasn’t, Armenia has weakened its position all by itself. 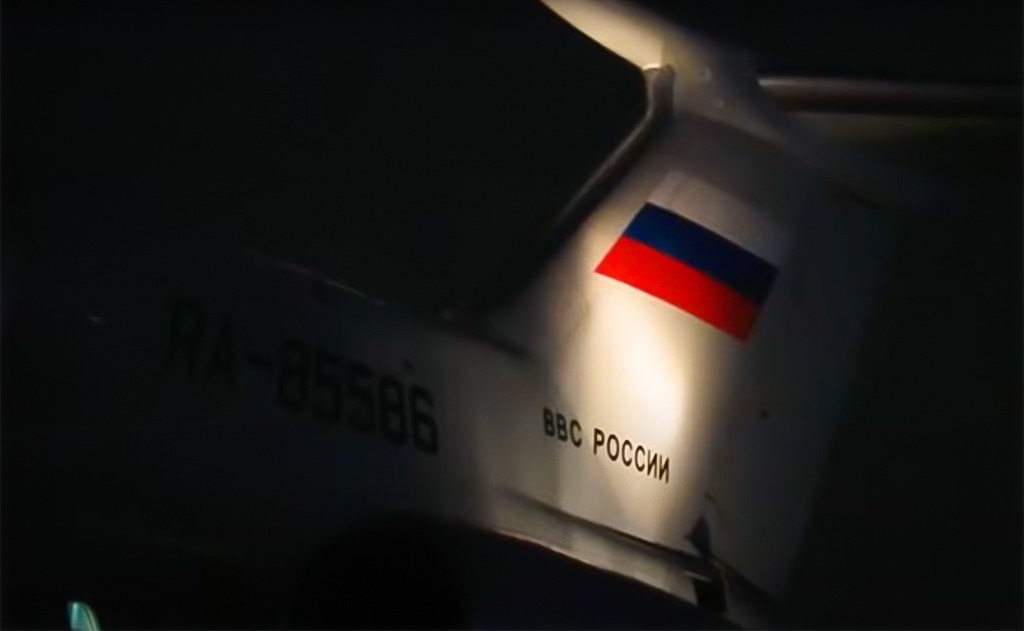 A Russian air force plane that landed in Yerevan without the returning prisoners that Armenians expected. (Screengrab)

On April 8, government officials in Yerevan reported that some Armenian captives, held for months in Azerbaijan, would finally be returning home. Dozens of families of the captives, along with journalists, gathered at the Yerevan airport to await the joyous scenes that were promised.

But when the plane from Baku landed late in the evening, there was only a single passenger: Rustam Muradov, the head of the Russian peacekeeping contingent in Karabakh. There were no Armenian prisoners. The bizarre, cruel bait-and-switch left the families unsure of whom to blame and many headed to the Ministry of Defense headquarters in Yerevan to demand answers. The situation was so tense that some officials had to be evacuated by helicopter.

Then Muradov himself dropped a bombshell. An Armenian reporter doorstopped him outside his hotel to ask him why the Armenian authorities had said some prisoners were being returned, and he replied: “It’s a lie and a provocation. Ask them [the Armenian government]. They are misleading the public. This was a normal, routine visit.”

Armenian officials tried to deflect responsibility by emphasizing that they hadn’t formally announced that a prisoner return was in the works. But multiple officials had confirmed reports that it was, and the deputy speaker of Armenia’s parliament, Alen Simonyan, later effectively confessed to Muradov’s accusation. "There were no agreements, we just hoped, as every day, that the flight would bring good news ... I think we should apologize to our fellow citizens … for such misinformation,” he told RFE/RL’s Armenian service.

The tragic farce further inflamed sensitivities around the issue of the Armenian prisoners being held by Azerbaijan, already the most raw of the many problems Armenia is facing following the defeat in last year’s war with Azerbaijan.

As snap parliamentary elections near – they are now scheduled for June 20 – it is also becoming a domestic political football, with voters likely to judge the performance of the current government in some part on its ability to secure the captives’ return. This extraordinary own goal is not going to help.

Armenia says that Azerbaijan holds about 200 prisoners following last year’s war, and that Baku is obliged to return them under provision eight of the Russia-brokered ceasefire statement that ended the fighting: “The exchange of prisoners of war, hostages and other detainees as well as the remains of the fatalities shall be carried out.” It doesn’t specify any other terms.

Azerbaijan says the number of Armenians that it holds is much lower and that they are only soldiers who were captured fighting after the ceasefire statement was signed, on November 10, and as such aren’t covered under the agreement.

But Azerbaijan also has been making it plain that it understands the stakes for Armenians in the prisoner issue, and it’s playing hardball. It has progressively been making more and more demands that, while not framed explicitly as bargaining chips for the prisoners, certainly look like them.

The demands have included, but are not limited, to: Armenia handing over maps of the landmines it laid during the war; withdrawing its armed forces from Karabakh; ceding control of a road through Armenian/Russian-controlled territory to the city of Shusha; and handing over a tiny exclave of Azerbaijani territory surrounded by Armenia.

The last three conditions were reported by Siranush Sahakyan, a lawyer representing the Armenian captives at the European Court of Human Rights. The last condition – to hand over Tigranashen, a tiny exclave of a village that had been part of Soviet Azerbaijan but was surrounded by Soviet Armenia and has been de facto controlled by Armenia since the 1990s – is an obvious non-starter, and may be voiced by Azerbaijan merely for the sake of appearing to make a concession in the negotiating process.

It's also not clear what the justification is for the demand to give over control of the road, which leads from the strategic Karabakh village of Red Bazar to Shusha, other than that it would make Azerbaijanis’ work in their newly retaken territories more convenient. Azerbaijani forces can now use the road but only while escorted by Russian peacekeepers; they have another unpaved road through territory that they fully control and are in the process of building a better road. But as Azerbaijan President Ilham Aliyev put it in January: “these roads insufficiently satisfy us.”

Still, the demand to use the Red Bazar road is one that is increasingly heard among Azerbaijanis. Among Armenians, who to a large degree have lost faith in their leadership, there are widespread rumors that the government is planning to hand over the village and the road to Azerbaijani control. The authorities have repeatedly denied the claims and announced projects to rebuild infrastructure and housing in the village that had been destroyed during the fighting.

The demand for Armenia to withdraw its military units from Karabakh stands on sturdier ground. The fourth point of the ceasefire statement stipulates that: “The peacekeeping contingent of the Russian Federation shall be deployed in parallel with the withdrawal of the Armenian armed forces from Nagorno-Karabakh.” That wording is vague – what does “parallel” mean in this context? – but the overall meaning is unambiguous. That condition also dovetails with Azerbaijan’s complaint that so many of the remaining prisoners (all of them in Azerbaijan’s accounting) are Armenian troops who were deployed after the ceasefire was agreed.

The issue of the mine maps, while not mentioned by Sahakyan, has been the one that Azerbaijani officials have been most vocally demanding, and which appears most likely to be the concession that Baku is seeking for the exchange of the prisoners.

The danger of mines in the territories that Azerbaijan retook during the war is clear, as Azerbaijani citizens who venture into the territory are regularly killed or injured by them. But this has been an issue since the very beginning of the post-war period, and initially Azerbaijani officials never mentioned Armenian maps.

Armenia Ministry of Foreign Affairs spokesperson Anna Naghdalyan was asked about the mine map issue, and accused Azerbaijan of pursing a “false agenda” to deflect from their refusal to hand over the captives.

“The Azerbaijani authorities are blatantly violating the international humanitarian law and their commitments under the provisions of the November 9 [ceasefire] statement to repatriate Armenian prisoners of war and civilians who are still being held in captivity,” Naghdalyan said on April 6. “In fact, in response to the pressure of the international community on this issue, the Azerbaijani side is trying to create grounds for justifying its non-compliance by putting forward a fake agenda of minefield maps. The fact that the Azerbaijani officials are raising this issue exclusively in the public field is a case in point.”

And there may be more. Political analyst Alexander Iskandaryan suggested that Azerbaijan may be using the prisoners as a means of exerting leverage on Armenia to get the most concessions over another project that is sure to be contentious: transport infrastructure across southern Armenia that Azerbaijan can use to connect its mainland with its exclave, Nakhchivan.

“Azerbaijan is trying to get the maximum benefit from the results of the war and is pushing Armenia on all of its weak spots: the prisoners, territories, and communications” in southern Armenia,” Iskandaryan told a press conference this week. “They need a road to Turkey that isn’t under Armenian control.”

It’s not clear that other actors here – most significantly Russia – are sympathetic to Azerbaijan’s hard-bargaining approach. Moscow has repeatedly called on the two sides to exchange prisoners on an “all-for-all” basis, that is that all prisoners should be handed back without conditions. Russia’s ambassador to Yerevan reiterated it again this week. The U.S. seems to see it that way, as well. An unnamed White House official told the Washington Post recently that it expected Baku to release the prisoners as a “goodwill” gesture. “We hope to see more detainees released,” the official said. “We’re not negotiating, but we’re urging them to exercise goodwill,” he said. (The American official also used a figure of Armenian detainees closer to the Azerbaijani count: 52.)

Armenian Prime Minister Nikol Pashinyan visited Russian President Vladimir Putin in Moscow on April 7, and the POW issue appeared to be at the top of his agenda. In his comments to the press following the meeting, he implied that he and Putin were on the same page. “I’m very glad that on the topic of this question [the captives] there is no discrepancy between us,” he said.

But Azerbaijan appears to have correctly calculated that there won’t be much cost for them in continuing to raise the stakes like this. “Yerevan understands that it is impossible to put pressure on Baku even with the help of third countries for one simple reason – it is Azerbaijan that is the winner in this war with all the ensuing consequences,” wrote Azerbaijani blogger Hamid Hamidov on his Facebook page.

“It’s obvious that no one is going to send aircraft carriers to the coast of Absheron” on Azerbaijan’s Caspian shore, Iskandaryan said in an interview with the news website Novosti-Armenia. “And other instruments won’t be enough. So I’m afraid that this is going to drag on.”

In their efforts at damage control following the prisoner return that wasn’t, the head of the Armenian parliamentary committee on defense and security, Andranik Kocharyan, blamed Azerbaijan for using the issue to cause tension in Armenia. “They are holding the prisoners to create tension in Armenia,” he said. That’s clearly true. But as this latest debacle makes clear, the Armenian government is creating plenty of tension itself.