Organizers hope that art can help start a conversation about greater inclusivity in the country, consistently rated the least tolerant in Europe. 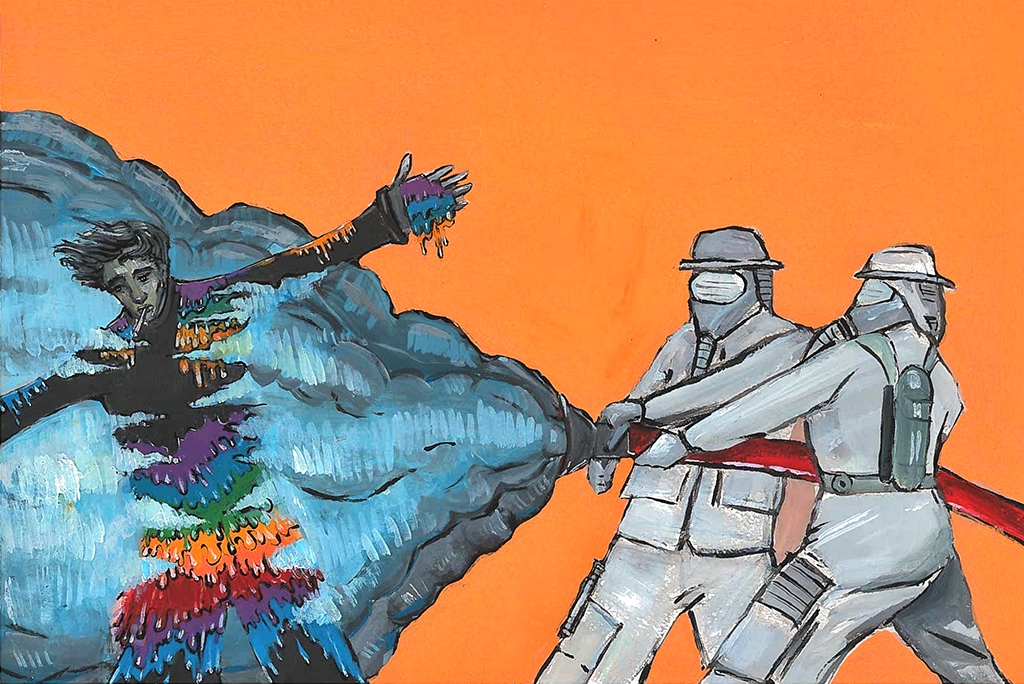 “This World Is Not Strong Enough to Stand My Colors,” by an artist named Nigar, is one of the works being exhibited online.

The second edition of the queer and feminist film festival In-Visible began on January 19 and is scheduled to run until mid-March, while the two-week Queer Art Festival, a new event, began on February 7. Both are taking place online as a result of the pandemic.

The focus of In-Visible – a project from the independent art space Salaam Cinema – is bringing queer films from around the world to an Azerbaijani audience, and in addition to film screenings will include educational workshops and discussions. The Queer Art Festival – the theme of which is “Queer x Azerbaijan – My Body, My Identity, My Heritage” – is aimed more at giving local artists a space to explore queer and feminist issues.

“There are a lot of problems of inequality in the art and film industry in Azerbaijan, a lack of queer and female artists and filmmakers,” Leyli Gafarova, a co-founder of In-Visible, told Eurasianet. The festival aims to “shake things up, bring in new forms and new experiments,” she said.

International advocacy groups regularly rate Azerbaijan as the most inhospitable place in Europe for queer people, and the situation has been exacerbated by the COVID-19 lockdown. Since the pandemic began, at least five transgender women have been attacked in Azerbaijan; one was killed.

Against this backdrop, an array of activist groups including Y-Peer, FemUtopia, Minority Magazine, Femiskop, Idahot-Azerbaijan, Femkulis, Gender Talks, and Nefes LGBTI Alliance, have been stepping up their efforts to combat discrimination, hate speech and gender-based violence.

International Women’s Day marches in Baku 2019 and 2020 also emphasized the rights of and challenges faced by queer Azerbaijanis, as did a 2019 march demanding the ratification of the Istanbul Convention against domestic violence. The open calls for queer rights were a new sight for many Azerbaijanis.

“The situation of LGBTIQs+ is deteriorating year by year, there is no legal base to protect them,” said Vahid Aliyev, an activist and master’s student at Goldsmiths, University of London. “But despite the pressure, arrests, and killings, visibility is increasing, and there has been some positive change.”

The festivals also are forced to struggle against an unforgiving artistic environment. While government-affiliated arts organizations are well-funded and can put on splashy events, independent artistic platforms struggle to find sponsors in Azerbaijan. Independent-minded artists and curators thus often seek opportunities abroad.

One of the most prominent queer art events in Azerbaijan was part of a 2019 European Union-sponsored festival – “Maiden Tower. To Be a Woman” – when Swedish artist Carolina Falkholt created a huge mural of a trans woman on the wall of an abandoned factory. The provocative image sparked debate and was quickly removed.

Both In-Visible and Queer AF are supported by international organizations and foreign embassies in Baku.

The organizers are striving to communicate their mission to an Azerbaijani public unaccustomed to debates about inclusive language, safety and privacy.

“We are still searching for local strategies, strategies which fit the local context,” Gafarova said. “Having a discussion collectively is critical for us to find the appropriate ways. We need more understanding, more willingness to have healthy discussions and constructive criticism.”

The pieces in the Queer Art Festival take various approaches. Nigar, an artist who submitted a piece without her last name, took the title of her painting “This World Is Not Strong Enough to Stand My Colors” from the last words of Isa Shahmarli, a gay activist who committed suicide in 2014. The painting portrays imposing figures in riot gear attempting to hose rainbow colors off a young person.

Another work, “Skin does not have a gender,” a series of photos inspired by a homophobic attack in Baku, depicts a traditional-appearing man looking vexed at a same-sex couple with their arms around one another, and then a pair of bruised arms.

But festival organizers had trouble getting submissions from local artists, which they attributed to the sensitivity of the theme. Still, they hope that the event can act as a form of “artivism … a tool for change,” said one of the organizers, Nigar Safarova (no relation to the author).

At one of the In-Visible panels, female film directors discussed their struggles to attain visibility and influence in a male-dominated creative world. “More than anything, you need to be very persistent because there’s always someone who will tell you ‘you can't do it because you are gay, women, untalented’ or just simply because they don't like you,” Mammadli said. The new festivals are helping to dismantle those obstacles, she said: “The progress is slow, but it exists.”

Queer activists hope these events can start a conversation. “As the discussion grows, the process of understanding sexuality and gender issues begins,” said Aliyev, the student in London. “Even on a small scale, people are already questioning and wanting to learn.”