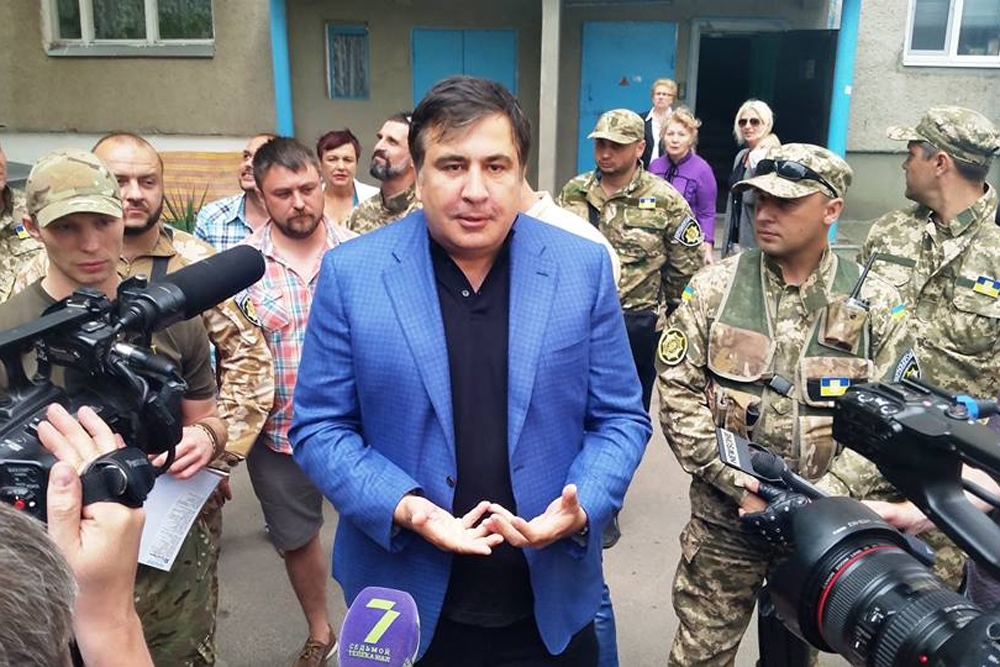 Mikheil Saakashvili speaks to reporters in the town of Chernomorsk in the Ukrainian region of Odessa in June 2016. Since assuming the position of the region’s governor, Saakashvili has found that reliance on the same tactics that he used in Georgia is not producing the outcomes he desired. (Photo: Odessa Regional Administration)

There is an old Ukrainian saying – if you chase two rabbits, you will not catch either one. This adage can apply to politics, and it has particular relevancy these days for Mikheil Saakashvili, the erstwhile president of Georgia who managed to morph into the governor of the Ukrainian region of Odessa.

Saakashvili, of course, has been one of Eurasia’s most colorful and controversial political figures for more than a decade, a leader who on occasion has resorted to authoritarian means to produce democratic ends.

His stint as Georgian president ended in 2013 due to term limits, but his tenure effectively was finished a year before that, when his United National Movement (UNM) party lost parliamentary elections, and the Georgian Dream coalition took control of the legislature. Shortly after leaving office, Saakashvili departed Georgia, and in 2014, he was charged with abuse-of-power crimes related to his two presidential terms.

At that point, he had seemed to be at a dead political end, but events in Ukraine gave him new life. In May 2015, Ukraine’s new president Petro Poroshenko surprised the world by appointing Saakashvili to the Odessa post.

Since assuming his new position in Odessa, Saakashvili has struggled to contain corruption, finding that playing the role of a crusading outsider in the diverse and complex, and yes, corruption-ridden region of Odessa is not easy as it was in his native land. His tough talk and authoritarian style largely succeeded in reducing low-level graft in Georgia, especially among the traffic police. But Saakashvili’s methods in Georgia also took a toll on civil society development by occasionally undermining due process.

Saakashvili so far has found that reliance on the same political tactics that he used in Georgia is not producing the outcomes he desired. That he cannot work his old magic is understandable given the greater complexities in Ukraine, especially Odessa. Every Ukrainian government in the post-Soviet era that has tried to get a handle on corruption has failed to do so.

Less understandable, and, at the moment, more significant, are Saakashvili’s ambitions in both Ukraine, a country in which he has only recently obtained citizenship, and Georgia, a country whose voters rejected his political vision, and which still appears to be processing both the good and the bad aspects of his administration.

Georgian parliamentary elections are scheduled for October, and Ukrainians will likely go to the polls in the next year or so.

These are the two rabbits that Saakashvili is currently trying to chase.

The problem faced by Saakashvili, or Misha, as he is widely called in Georgia and Ukraine, is that he is well known in both countries, but not exactly popular in either. In Ukraine, Misha has made a lot of noise, but has largely been unable to deliver results in Odessa. Moreover, within a few months of taking charge there, he appeared to set his eyes on a bigger prize – that of becoming prime minister of his adoptive country. This ambition, while impressive given that he is a newly minted Ukrainian citizen, has brought him into conflict with many of Ukraine’s more established political leaders. Some of this was due to Misha’s anti-corruption fervor, but his sometimes overly aggressive challenges and unfounded accusations were occasionally perceived as motivated by self-promotion, and thus rubbed some important people the wrong way.

In early September, Saakashvili became embroiled in a controversy linked to the grisly rape and murder of a young girl in the Odessa region. The killing sparked what observers characterized as a pogrom against a local Roma community. Commenting on the tragic events, Saakashvili appeared to add fuel to the fire by making what were seen by some as derogatory comments about the Roma community. When his response was criticized in some media, including Foreign Policy, for failing to explicitly condemn mob violence, Saakashvili attacked his critics for being biased.

Curiously, Saakashvili has kept pursuing his Ukrainian goal while simultaneously indicating his interest in returning to Georgia, with the apparent aim of helping the UNM (and, ultimately, himself) to regain power there.

The UNM party has remained a relevant political force, despite the electoral thumping it experienced at the polls in 2012. As this year’s parliamentary elections approach, polls show the UNM running neck-and-neck with Georgia’s governing Georgian Dream coalition. One of the factors that has enabled the UNM to successfully rebrand itself was that, with Misha off in Ukraine, it could distance itself from the former president’s controversial legacy, and present itself as a viable western-leaning alternative to the incumbent Georgian Dream government.

Thus, were Misha to attempt to inject himself now into Georgia’s parliamentary race, it would quite possibly create an awkward situation for Western-oriented liberals there. A key to the UNM’s potential success in the October elections will be its ability to make voters forget about the abuses and excesses of the Saakashvili era, when the UNM controlled parliament. Saakashvili’s potential return to Georgia would only remind voters of those excesses. At the same time, a good electoral showing by a Misha-less UNM would make his oft-stated goal of making a triumphant return to Georgia, or even of becoming politically relevant again in the country, much more difficult.

In Ukraine, meanwhile, there are signs that Saakashvili’s tenure in Odessa is reaching the point of diminishing returns. What Saakashvili brings to the governorship is not necessarily what Ukraine needs at the moment.

Ukraine is facing myriads of daunting challenges. First among these is Russian aggression, which has cost Kyiv control of the Crimea and has destabilized the eastern Donbas region. Taming corruption presents another vast challenge, as does crafting a modern economy that works for all Ukrainians. Finding solutions to these dilemmas is difficult enough for any Ukrainian government, but the degree of difficulty is perhaps enhanced by Saakashvili’s presence in Odessa. His ambitions and political practices, in particular his habit of accusing anyone who opposes his ideas of being a Moscow lackey, do not exert a badly needed calming influence on Ukrainian politics.

It took over a decade for voters in Georgia to determine they had had enough of the colorful, dramatic, inspired, but also erratic and frequently authoritarian Saakashvili. It is apparent it will take the Ukrainian people, and their leaders, a lot less time than that.

Peter Zalmayev is the director of the Eurasia Democracy Initiative, a New York-based non-governmental organization that seeks to educate the public about economic, political and social dynamics in post-Soviet states. Recently, Zalmayev has been a frequent commentator on the hostilities in Eastern Ukraine, appearing on leading international broadcast media, including the BBC, CNN and Al Jazeera, as well as most major Ukrainian media outlets. Zalmayev has also contributed commentaries to Al Jazeera's website and The Huffington Post.