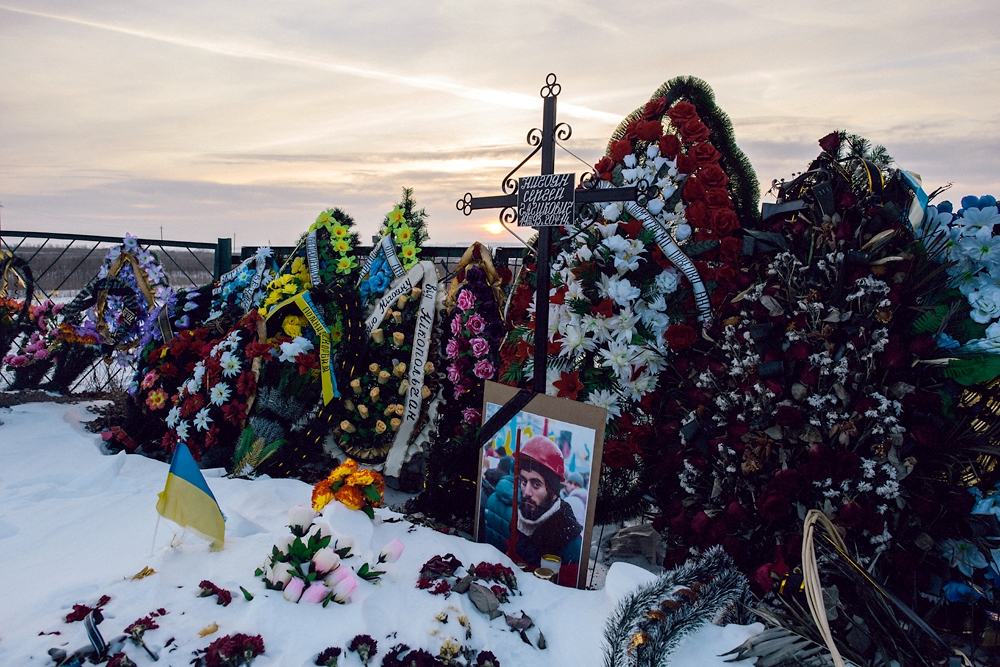 Sergey Nigoyan, an ethnic Armenian born in a village about 500 kilometers east of Kyiv, is believed to be the first person killed during recent protests in the Ukrainian capital. (Photo: Jacob Balzani Lööv/TRANSTERRA Media)

Sergei Nigoyan, a 20-year-old ethnic Armenian born in Ukraine, was the first Euromaidan activist to fall. His death back in late January created a challenge for leaders of the sizable Armenian community in Ukraine: as the revolution unfolds, Armenians are generally eager to be seen as loyal and neutral.

In statements issued over the past month, the Union of Armenians in Ukraine (UAU), the leading civic organization representing the Armenian diaspora in the country, has studiously avoided taking sides, and instead expressed support for the maintenance of constitutional order. Tacitly, leaders of the civic group would seem to prefer that ethnic Armenians stay out of the struggle between Euromaidan supporters and loyalists of ousted president Viktor Yanukovich.

In the immediate aftermath of Nigoyan’s death on January 22, the UAU urged “all citizens not to come under the influence of provocations and to refrain from illegal actions.” Subsequently, a statement issued following a gathering of Armenian youth in early February noted that “every Armenian has the right to express a civic position, but not in violation of the country’s constitution.”

The caution exhibited by Armenian leaders is understandable considering that about half of the estimated 100,000 Armenians in Ukraine today arrived in the country after 1989. Some, including Sergei Nigoyan’s parents, were forced migrants who fled anti-Armenian pogroms in Azerbaijan and warfare in and around Nagorno-Karabakh during the late 1980s and early 1990s. Having been embroiled in one conflict in recent memory, these Armenians are not eager to get caught up in another.

Over the past two decades, Armenians have worked hard to find a place in Ukrainian society. Relatively recent immigrants have tended to settle in Russian-speaking areas of eastern Ukraine and earn a living primarily from agriculture. Some have prospered, underscored by the fact that the head of the UAU, Vilen Shatvoryan, is also a member of the Ukrainian parliament. Shatvoryan is affiliated with the Party of Regions, a political force that backed Yanukovich.

UAU leaders are clearly concerned that current uncertainties in Ukraine could lead to persecution of ethnic minorities. In staking out a watch-and-wait stance, UAU leaders have stated it is their duty to work “to preserve harmony and stability within society for all citizens, regardless of ethnic origin.”

Nigoyan is not the only Armenian-Ukrainian supporter of the Euromaidan movement to have died. Another, identified as Georgii Arutiunian, a resident of the western Ukrainian of Rivne, was killed amid the bloodbath in Kyiv on February 20, a development that hastened the collapse of Yanukovich’s administration.

According to those that knew him, Nigoyan was not one inclined to sit on the sidelines. His parents moved to Bereznuvativka -- a windswept farming community of 700 roughly 40 miles west of the industrial city of Dnipropetrovsk -- in 1993, leaving behind a home in Armenia’s northern Tavush Region, near the border with Azerbaijan. Their home village of Navur at the time was coming under periodic attack by Azerbaijani forces. Sergei was born shortly after his family’s arrival in Ukraine.

Growing up, Sergei embraced Ukrainian culture. Arsen, his father, recalled that his son resolved to join in the Euromaidan movement immediately after watching a televised report of riot police attacking anti-Yanukovich protesters in late November. He left Bereznuvativka for the capital Kyiv in early December.

“I don’t know where he got all this patriotism,” Arsen said of his son. “In our family, we are not really patriotic. … Instead, he [Sergei] was saying that he has to live in this country and this fight was for its future.”

Nigoyan’s body now rests in a cemetery situated on a little hill overlooking Bereznuvativka. In the eyes of Euromaidan activists now striving to consolidate their authority in Kyiv, Nigoyan is a hero. But this does little to console his mother, Venera.

“I used to support my only son in all his ideas,” she said. “But now I feel there is no political party or flag that can bring my son back to life.”